It’s that time again, the moment I take a look at the progress of my Skaven army this month. To recap for newer readers, back at the end of 2016 I realised that my Skaven army was going nowhere. Rather than the mighty horde of painted rodents I dreamed of it was a big heap of unpainted plastic. As it was the scale of the project that was putting me off, rather than attempt to tackle it all in one go I decided to add a minimum of one model to the army every month. In 2017 this proved so successful that I’ve kept at it in 2018.

This month my attention was also grabbed by the latest of Azazel’s monthly challenges; the Jewel of July. Again, for those new to the idea, blogger extraordinaire Azazel has been setting a challenge to himself and anyone else who fancied joining in, every month of the year. For July the aim was to paint a centre piece; a hero, a big monster or a warmachine. I had great plans for this but sadly the trials of “real life” put paid to the deff-dread, Goliath boss and others for this month. One model however just couldn’t be left behind, straddling as it does both challenges; the warp lightning cannon. 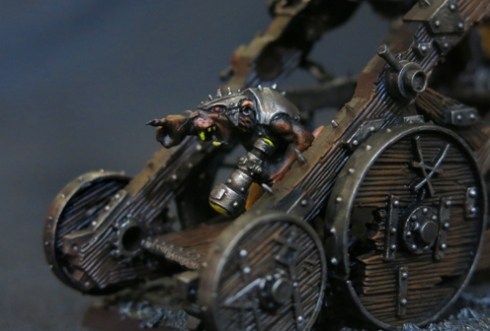 As with all the bigger kits even when I thought I was done I found several areas that I’d overlooked and had to take it back to the painting desk for further touch-ups. In the end this one came right down to the wire, and for a while I feared it wouldn’t make it, which would have been a disaster as I would have finally failed to maintain my Skaven streak.

The glowing effect on the warpstone was remarkably easy to achieve; just a quick coat of waystone green technical paint over fulgurite copper, plus a few judicious highlights of moot green. The whole effect only took about ten minutes to complete (minus drying time of course).

Those familiar with the kit will also notice there’s a few bits missing here and there, and the odd addition to cover over it’s various battle scars. The model was sold to me by a friend (indeed, she basically gave it away) and from what I’ve heard it was fairly battered when she got it (also second hand). The price for getting it so cheaply was all of the damage it had accrued along the way but I think I made a fair job of covering that up. Of course part of the joy of the Skaven is their ramshackle warmachines so it was relatively easy to incorporate the damage into the model and disguise it.

Although the heap of Skaven plastic still waiting for attention remains fairly huge I’m pleased to say that finishing it is now starting to look achievable. Of course I’m not making any promises, I’ll just keep chipping away, but it’ll be interesting to see where it stands next time New Year rolls around.