All My Freinds Are Skeletons – Part 1

So it turns out that painting skeletons is a lot more labour intensive than I’d been led to believe. Surely it’s just a case of drybrush them with Ushabti Bone and go home?! Instead it turns out to be quite a lot of effort. No wonder I only got half-way through painting this squad the last time!

What’s more I’ve discovered the little devils are an absolute nightmare to photograph – all those shields and swords held over their faces (are they shy or something*?) casting shadows everywhere.

*I mean, I’m aware that they are notorious bashful about attending social functions, on account of having no-body to go with, but surely this is a bit much?

Anyway, enough of my griping, here’s the first half of the squad done at last. 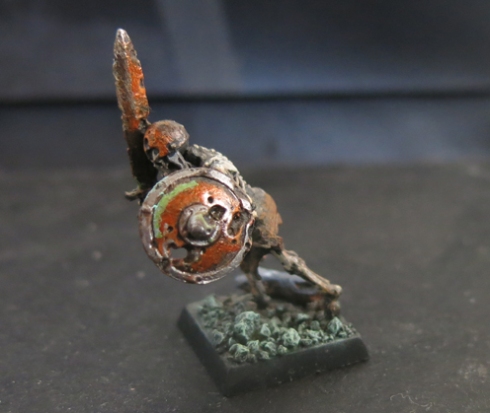 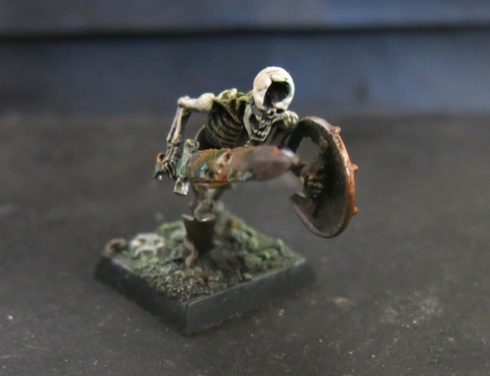 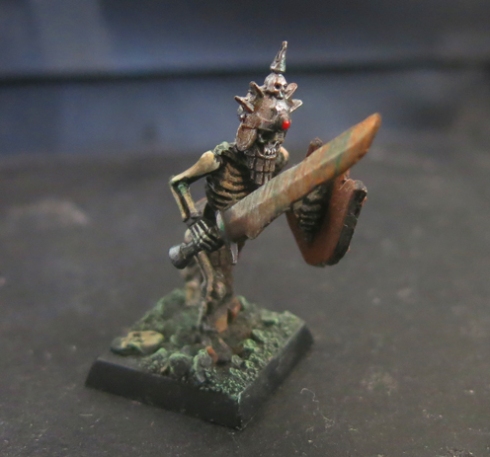 Long before GW provided us with a (rather fancy looking) plastic necromancer the only options, if one wanted one’s collection to include a mad reanimator of the dead, were the (prehistoric and duff looking) metal models, or making one yourself. As every good necromancer enjoys cobbling things together from bits of other people I naturally went for the latter option.

Like the Vampire Count himself, a model of a very similar vintage, there’s a lot of elements to this model I wanted to keep in recognition of their significance to my development as a hobbyist. As with most of the other models in my Vampire Counts collection this necromancer is at least six or seven years old now, and in that time it’s fair to say I’ve come on a great deal both as a painter and a convertor. Nonetheless I wasn’t keen to make many changes to him in recognition of his impact on my development as a hobbyist. Much like the vampire this was a model which, in spite of fairly radical conversion work, ended up looking rather impressive. Time has shown me a lot of his flaws, of course, but when I first finished him I was inordinately pleased with myself – here was proof that I could actually convert models to be proud of. Thus, after considerable humming and hawing I’ve decided to leave him alone (bar a slight tweak to the colour of the base to bring him into line with the rest of the collection). Thus he looks now pretty much exactly as he did when he was first finished. 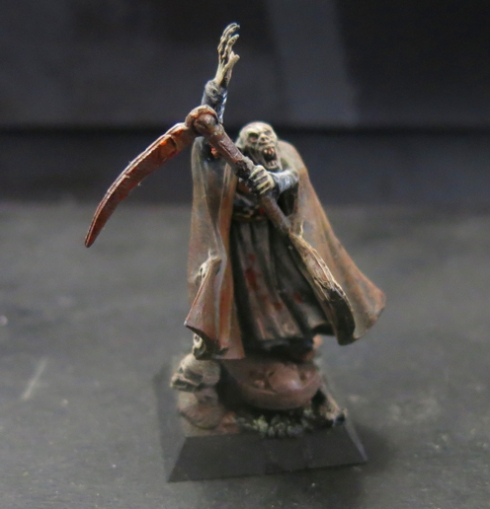 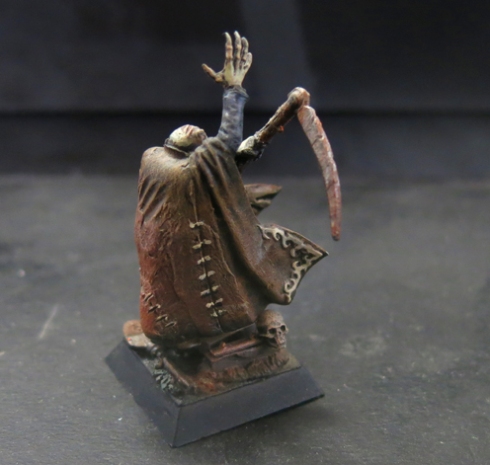 This face stitched into his cape (never miss out a good cliché!) may not be the finest example of greenstuffing I’ve produced but at the time it was a revelation.

Now I’ve secured the services of this necromancer I’m hoping to raise a shambling mass of skeletons in short order = perhaps even by the end of the week.

I first started work on my Vampire Counts army way back in 2010. Back then Warhammer was going strong, Age of Sigmar probably hadn’t even been thought of, the zombie miniatures were already ancient (although everyone reckoned they’d be replaced “soon”) and the cover of the Vampire’s army book looked like this: 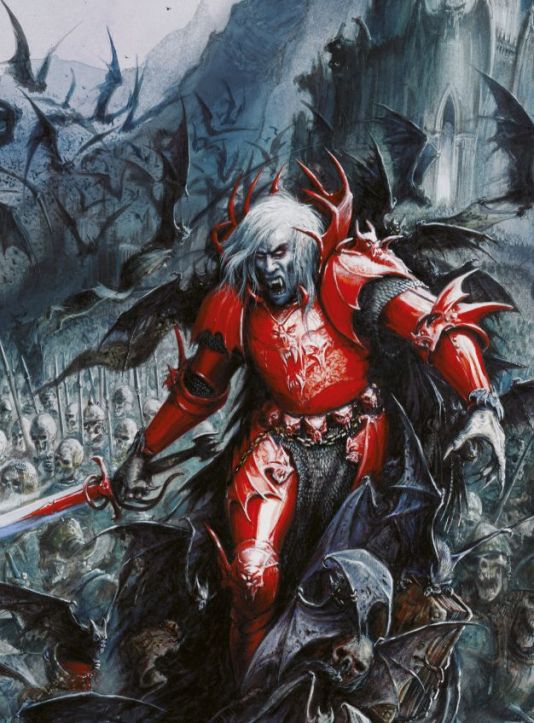 It was this piece of artwork that proved to be the central inspiration behind my collection. To me it perfectly captured what I was looking for in my army – a vast shambling host of the living dead, anchored together by the terrible will of the Vampire that has raised them. There can be no doubt that this is the Army Book for the Vampire Counts, placed front and centre, without whom the army would simply crumble and cease to exist. It was this effect that I wanted to illustrate with my models, that gloriously red vampire lording it over the dull coloured ranks of his corpse-slaves.

For me this Vampire Count remains one of the most important, if not the most important, models I’ve ever made. We’ve all put together conversions in our early days that turn out to be a bit of a bitz jumble (whadayamean I still do!?) but this was the first one where I really thought I’d nailed it; the components, the pose, the painting, everything came together to capture the character exactly as I’d envisioned it. Coming back to him almost seven years later was a real pleasure and, even though my painting overall has come on a great deal, he didn’t need much to pull him up to my modern standard. It goes to prove once again that, no matter one’s level of skill or experience, being passionate about a model will bring a great deal to the quality of the finished piece.