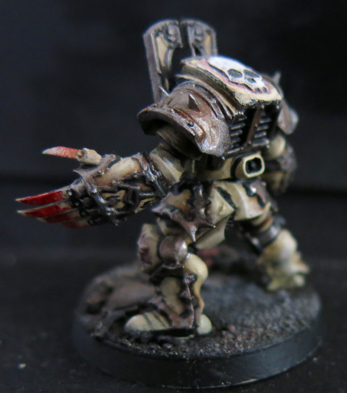 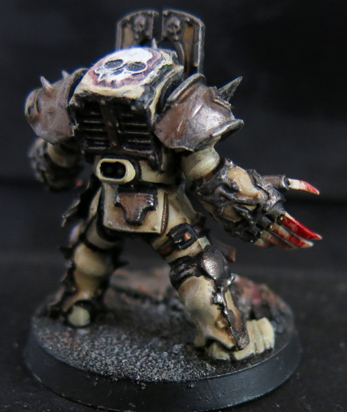 As promised here we have the second new Khornate terminator. With this one I wanted a more restrained pose that emphasised the bulk and power that I associate with old-school terminators which could act as a blank canvas to play with. I’ve also wanted to make use of a pair of wrathmonger legs ever since I discovered they fit neatly onto a terminator body, and the rest of the pose flowed naturally from this stance. As ever I’m happy to hear some feedback so let me know what you think in the comment’s box. 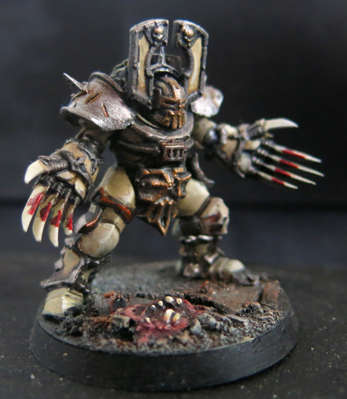 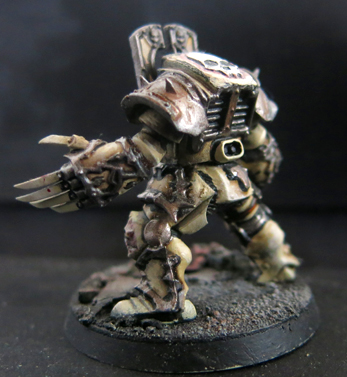 .Of course, with two new units added to the squad it can only be group-shot o’clock. If you want to find out more about the others in the squad you can look here, here, here and here. 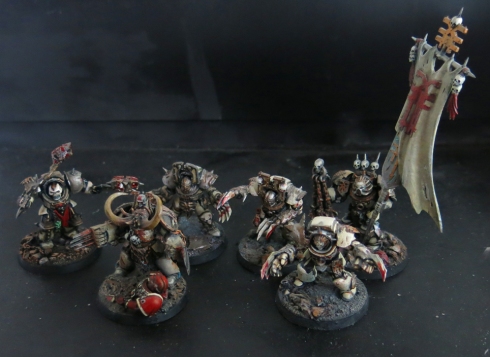 And after a slight hiatus a forth pestilent Terminator lumbers forth from Nurgle’s garden! 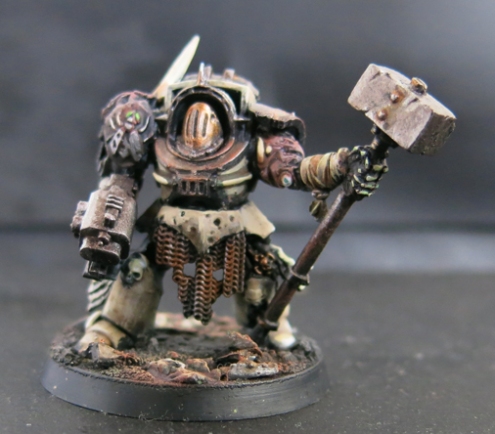 Unlike the others I wanted to tone down the guts and go for a more restrained horror, whilst still making it clear that this is a servant of the plague god. 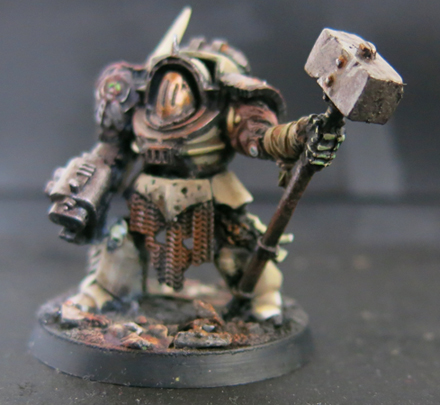 I also wanted to try some new things on the base (rather than just using more green gunk. Much and all as I love green gunk…) 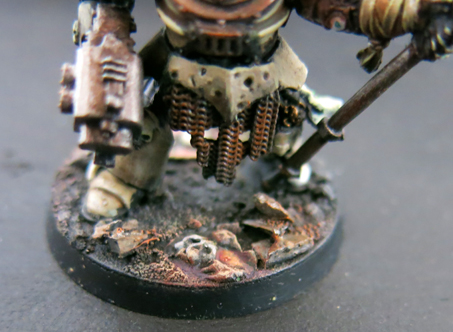 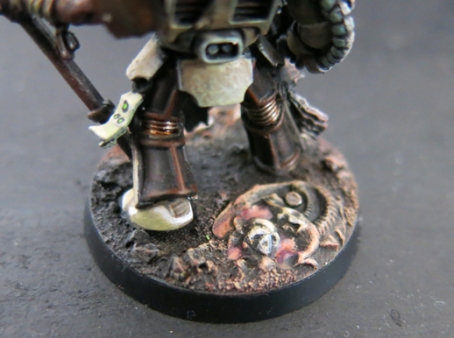 And here he is with his foul battle brothers. Just got a bargain on some ‘pre-loved’ Black Reach terminators so don’t expect this to be the last we see of this filthy squad. In the meantime your thoughts are as welcome as ever.

Following the completion of the champion for my squad of Nurgle worshipping terminators I decided to strike whilst the iron was hot and get the squad’s icon bearer finished off as well. You may recall that last time we saw him he looked like this: 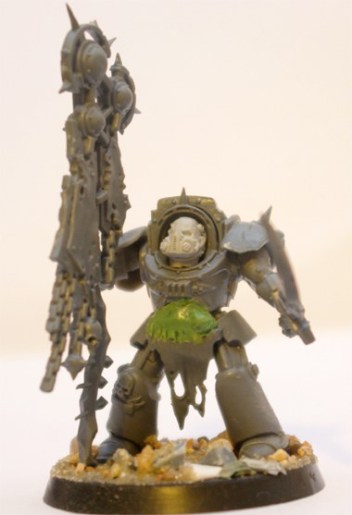 At the time I felt that he was rather waspish in the waist – all fine and well for Slaanesh’s image-conscious lovers but hardly acceptable for Nurgle, whose followers are rotund and jolly to a man. Before he saw any paint I needed to build up the belly, and give him some appropriately horrible guts into the bargain. All of that brings him to this; finished at last.

Here’s the whole squad (so far) together.

Excitingly the squad’s fourth member is now almost finished so I’m going to crack on and see if I can get him done too. As before – watch this space!

In my last post I showed the Nurgle terminator that had grown (slowly) out of a combination of loyalist and Putrid Blightking bits, helped along by my ongoing exploration of greenstuff. I actually prefer using loyalist terminator parts for Nurgle models as they’re rather less ostentatious than the chaos models and for Nurgle bare ceramite and rust is the only way to go!

Anyway I didn’t want him to get lonely by himself so I threw together a couple more Nurgly terminators. See what you think – but keep in mind its very early days for these two, and you know how long it took me to finish off the last one.

First of all here’s the squad’s champion.

Part of me wonders what’s going on inside that armour? Has he been blessed with the face of a Nurgling – or is he long dead and one – or more – of the little pox-mites are animating the corpse? Are we in fact seeing one of them peaking out through the front of the armour to see what’s going on? I think I’d rather not know…

We also have this chap, who carries the squads beloved Icon of Despair in the hopes that Grandfather Nurgle will rain his benevolence upon him and his brothers.

If anything he’s got even further to go than the champion – especially when it comes to building up the greenstuff around what is currently a rather waspish waste. As ever your thoughts are appreciated on both of them so if you have any feedback or suggestions I’d be glad to see them.

You may recognise this chap. He’s popped up before in various guises. In fact for a while I wondered if he’d ever be finished, or would just keep evolving, appearing on the blog again and again as I added a tentacle here, a pustule there, until in the end he was unrecognisable and spawnlike. With an effort, however, I controlled myself and forced the project to some kind of orderly conclusion. 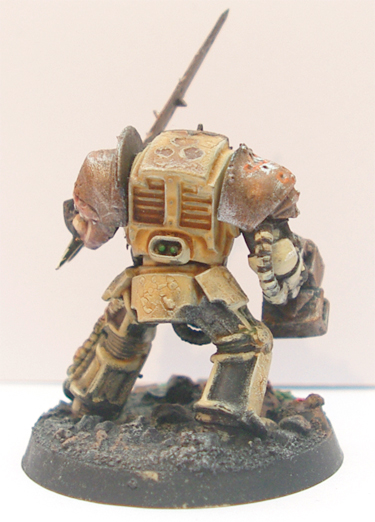 Now of course he’s going to need some battle-brothers but I’m feeling quite excited about this project again and I’ve already got a few ideas in mind. Watch this space!

After I uploaded pictures of the final Chaos Terminator to join my squad The Blessed Slaughter earlier in the week Alex over at the Dauntless 215th suggested I put up a group shot of the whole ugly mob together. So, as promised, here they are:

Convert or Die
Create a free website or blog at WordPress.com.