Continuing my showcasing of the dioramas on display in Warhammer World today we take a look at the rest of the displays focussing on the Old World of Warhammer and the new Realms of Age of Sigmar. First up we have a pair of small displays exhibiting the Ironjaws – a new faction which grew out of the old Black Orcs – and opposite them the Sylvaneth, which were developed from the treemen and dryads who used to hang out with the Wood Elves.

Orc brutes march past tribal boundary markers whilst a warboss, crouched on his hulking reptilian mount, watches from a neighbouring hillock. 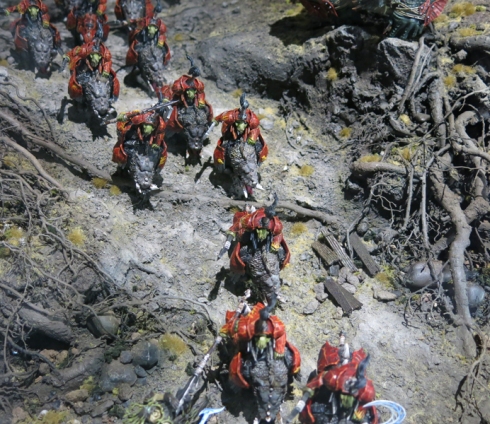 The tide of red armour stands out against the black rocks and wilted vegetation. 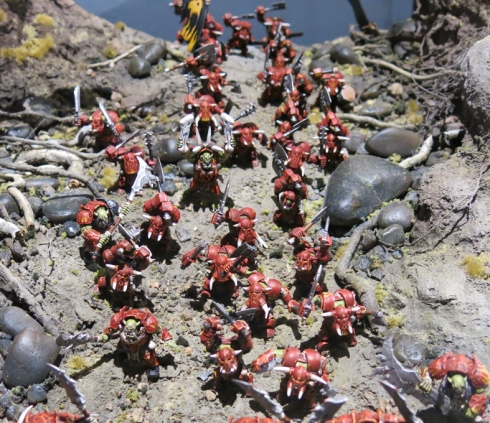 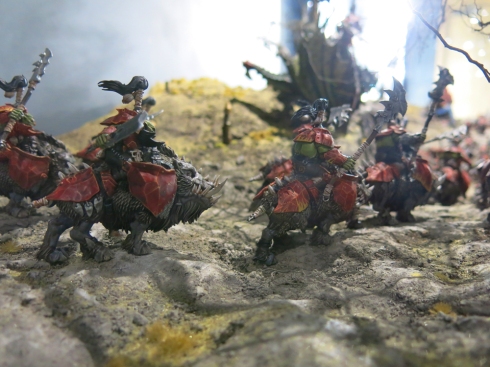 The neighbouring display is considerably more green and lush. The Orcs have left their semi-desert homeland and invaded the forest only to find themselves ambushed by the Sylvaneth guardians of the woods led by Alarielle herself and several ancient treemen… 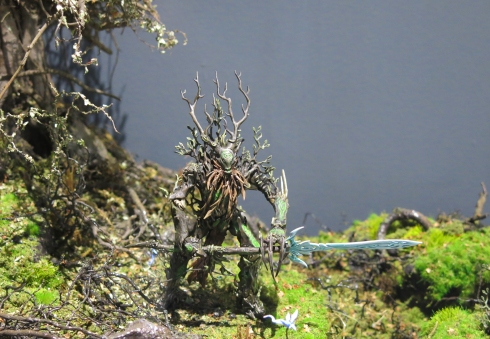 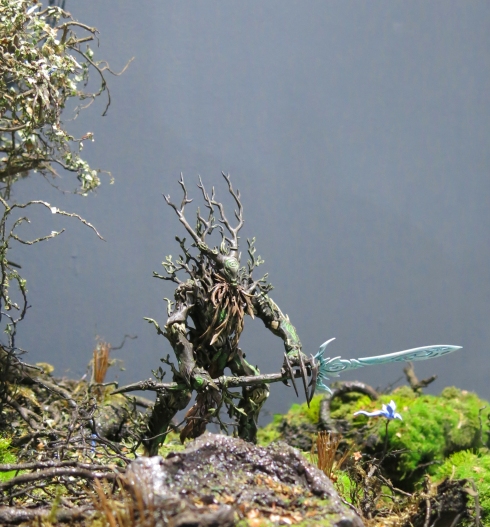 …including this impressively bearded individual…

…and these tree revenants. 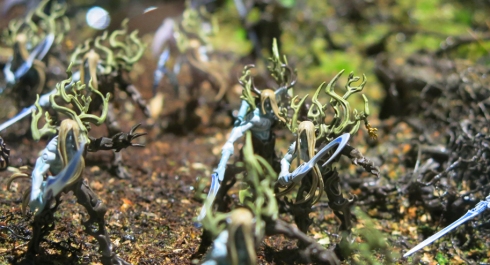 Alarielle, a woman after my own heart! Keen on trees she’d have undoubtedly enjoyed my other outing whilst in Nottingham – a trip to visit the ancient Major Oak in Sherwood Forest.

Of course that would have left her unable to oversee the defence of her woodland from the marauding orcs, although by the looks of things her followers were managing fine by themselves.

Next along, one of the displays that was top of my list to see ever since a friend showed me pictures from her own trip. Here the Skaven and Dwarves do battle in the depths of the Underway, deep beneath the World’s Edge Mountains.

The war under the ground remains one of my favourite parts of the Warhammer background. As a fan of Skaven, Dwarves and Night Goblins alike the subterranean struggle is a compelling battle for survival, all happening out of sight of the races living above.

Here dwarven stoicism meets the mad brew of science and magic wielded by the ratmen, the two sides divided by a jagged canyon criss-crossed by swaying rope bridges. 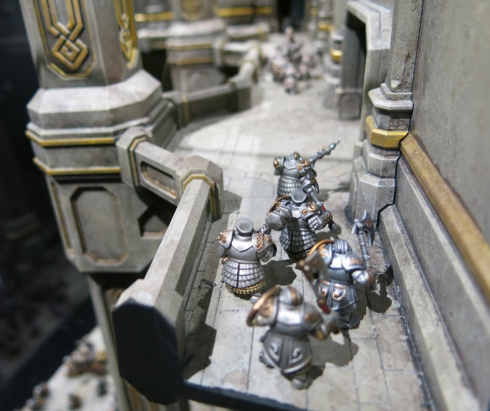 The scene contains over three hundred miniatures, which probably explains why I failed to spot Joseph Bugman who is allegedly hiding in there somewhere. 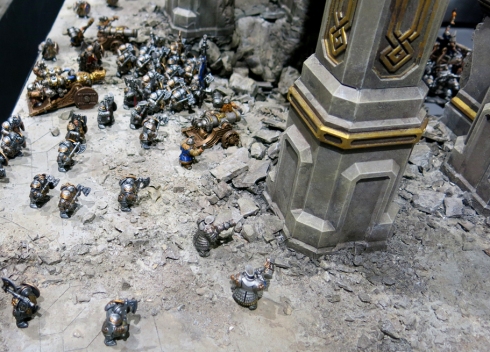 Once again I hope you’re enjoying this look through the Warhammer World displays and I really do recommend a visit if you’re in the area. Tomorrow we’ll take a look at the armies of the Imperium in the dark days of humanity’s future.

In spite of their popularity as perhaps the most iconic of all fantasy races (sorry dwarves!) it wasn’t until recently that I started to recognise the appeal of elves. Too often they have been presented in a way that focussed only on their glory and never on their flaws. Hyperbole is everywhere – they are wiser and more talented in every way than mere humans and long-lived to the point of near immortality. Whilst we are often ugly, cowardly and uncultured, and always bedevilled by age, sickness and death, these natural aristocrats remain forever young and beautiful, an eternal master race. Generally their only flaw is their arrogance, which only serves to make the face that they are practically perfect in every way so much more grating. I like my heroes grubby and imperfect and my fey folk devilish wildwood dwellers, the treacherous creatures of northern European myth and Brian Froud paintings, not the gentle, civilised people of Tolkien but the otherworldly shamanic creatures feared by the Gaels and Norse alike.

The idea of collecting any elven miniatures therefore was, for a long time, a non-issue. If I wanted a superior race of magically powerful immortals to contemptuously survey the human herd then my allegiance was to the Vampire Counts, and that was that. It wasn’t until the release of the newest edition of the Wood Elves from Games Workshop, followed swiftly by the merging of the elven races in the End Times that I began to change my mind. Partly it’s the fact that many of the new Wood Elf kits are just gorgeous, a welcome result for a faction which had previously suffered from having some of the worst sculpts in Games Workshop’s catalogue. More than that however, I became drawn to the idea of creating a wild hunt, blending elements of the Dark and Wood Elves to create a savage sylvan host, the elemental ferocity of the forest unleashed. It’s an image which has stuck with me, yet to be built but growing organically in my mind’s eye; packs of witch elves and blood-fed dryads, sorceresses leading the host from atop their mobile shrines, treemen and ancient forest gods awaking to furious life.

To my memory the only elf I’ve ever painted; acquired long ago as part of a Mantic giveaway. Quite how he fights with a bow in one hand and a sword in the other (and no arrows) remains a mystery…

All of which brings me to this weekend’s Sylvaneth release. Through Silver Tower we’ve already seen some of Games Workshop’s concepts for a new, much more savage and alien aspect to the elves, now it’s the turn of the dryads and treemen. Age of Sigmar has been categorised by the over-the-top appearance of its models. Restraint has been cast aside and everything needs to be bigger and crazier than ever before. Now this is far from a bad thing, this is fantasy after all, but it has meant that when they’ve overcooked things they’ve tended to do it quite spectacularly. Thus I awaited this release with a degree of trepidation. If they pulled it off this could be a treasure trove for my elves, but for every hit recently there’s been a miss; for every slaughterpriest or maw-krusha there’s been a warchanter or celestant-prime. Luckily, my fears have not been realised and, for the most part, the Sylvaneth stay just the right side of silly. There are a few close calls – Alarielle herself comes close to overegging it but somehow remains brilliant rather than ridiculous. Likewise the new incarnation of Drycha is a little silly (I feel like someone at the design studio said “Trees are cool, dreadnaughts are cool, why not?!’) although adjusting the pose the snipping off the trailing insects should be more than enough to redeem her. These are balanced by some moments of real brilliance; the Branchwytch for instance, the revenants and or the huge slabs of honeycomb on Drycha’s armour (which is almost enough for me to forgive them for dragging another Warhammer character back from the grave).

The longer I looked at this release the more I became convinced I’d seen something in this style before and, looking at Alarielle’s giant beetle steed it suddenly clicked. This is not a reimagining of Games Workshops Wood Elves but a resurrection of Rackham’s Daikinee. 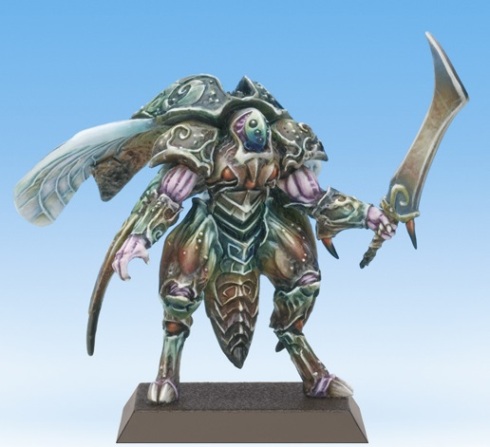 Spot the difference; a Daikinee Sylvan Animae and a Sylvaneth Spite Revenant.

For the whippersnappers out there Rackham was a French miniatures company rightly famed for the quality of their miniatures. Sadly they collapsed following a radical shift in direction that alienated many fans, switching from a square-based skirmish game to a round-based rank-and-file set-up. The name of this new game, for those not already feeling a vertiginous sense of déjà-vu was ‘Age of Rag’narok’.  The nail in the coffin was the decision to abandon their former range for pre-painted plastics and, with recession already haunting economies around the globe and their fans abandoning them, they went to the wall in short order. Rumour has it that Games Workshop recruited many of the suddenly unemployed Rackham sculptors although I confess I’m sufficiently out of the loop on these things now that I may barking up the wrong tree (pun very definitely intended). Whatever the truth of what happened the Daikinee remain one of the most beautiful and original interpretations of the wood elf concept ever created, especially when compared to Games Workshop models of a similar vintage. If this is their rebirth then that alone is worthy of celebration.