‘ere we go!! The third (and final – for now!) of the Meganobs comes stomping out to join his bruvas. The head is from Spellcrow’s ‘Bulky Cyber Orcs” collection, a set which ties in nicely with the Meganobs – expect to see more of them making an appearance in the future.

Right lads – shoot ’em up! The squad of Ork shoota boys is completed by the addition of this Boss Nob. Again, the head is from Spellcrow, the rest of the Ork is Games Workshop.

Now we’re into the middle of winter, and with daylight in extremely short supply, it’s getting increasingly difficult to get any decent pictures of models. Hopefully though this gives you some idea of how he looks – although I acknowledge theat they’re not the best photos ever taken!

Anyway here he is with his boys (as usual click on it for a proper view).

There’s a few rats I still want to finish off – then expect more Orks in the new year. Until then WAAAGH and all that! 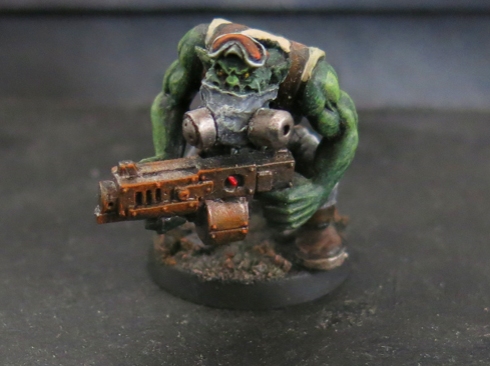 This one got a little extra work to add a GW Ork hat to a Spellcrow head. (I’m also rather pleased with his ‘crazy eyes’!) 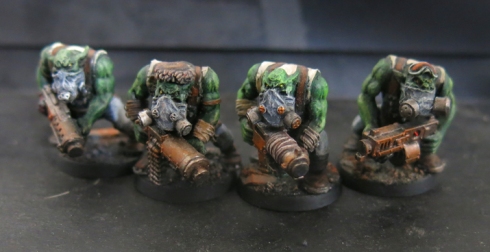 When I first started my Ork collection (seven years ago now? Longer?!) I set myself the challenge of never using the same head more than once on any of the infantry models. It’s a subtle little trick but it really adds to the sense of (small ‘c’) chaos and lack of uniformity in an Ork army, and helps to maintain that general aesthetic of unruliness in the face of unifying elements like a common colour scheme. It’s also very practical to achieve, there are just so many Ork heads available between the 40k and AoS ranges, without even starting on all the third-party companies out there.

Until now I’ve managed to stick to it. This gasmask from Spellcrow though – just too cool not to use twice! 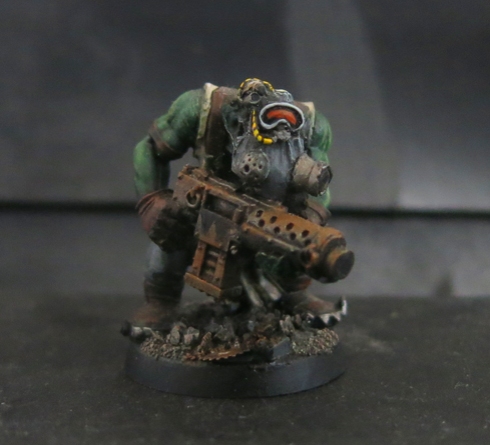 Waaargh! and all that… It’s been far too long since my Ork boys got any proper attention. Back in 2014 I slogged through the whole collection, touching up paintwork that was already several years old and turning the collection into something I could be proud of once again. In many ways it was an exciting project but by the end of it I was a little burned out with all things green and rather than leaping into the (then new) Ork releases I’d been planning to purchase I returned to the realm of Chaos and the boyz were left to grumble on the shelf. However every dog has its day and the hour of the orks has returned at last.

On the principle that, when it comes to Orcs, more is always better, I want to add another unit of boys. I’ve already got a fairly large collection of slugga boys so decided to set things rolling with a new mob of shoota boys, replacing some of the heads with a set of gas-mask heads from Spellcrow. 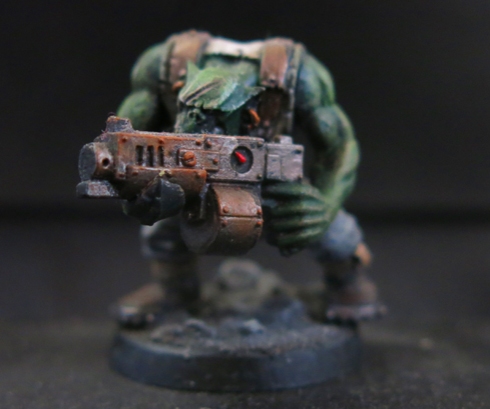 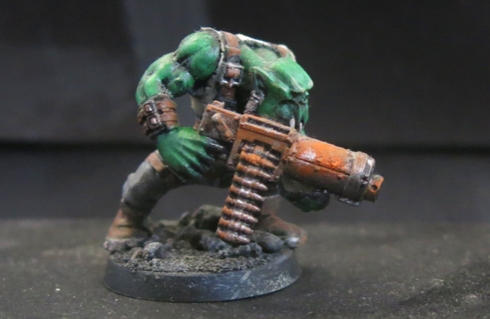 And lastly, not a group shot as such but a taste of things to come!