The Chances Of Anything Coming From Mars… – Part 2

It’s been the best part of twenty years since I started banging on about wanting to paint an Adeptus Mechanicus army, almost six years since miniatures for them were released and nine months since I finally got a couple of Skitarii painted. For that matter it’s also been one week since you looked at me, cocked your head to the side and said, “We need to talk about Mars” and five days since you laughed at me saying “The Omnissiah demands you get your shit together and paint His legions!”. Anyway, at long last my two Skitarii have been joined by two more. 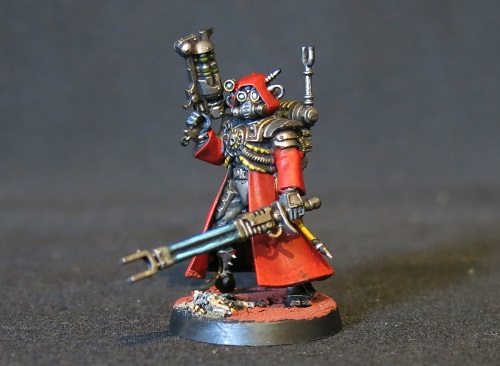 Really I should have painted another to round out a squad but the uncanny powers of Tzeentch with which I’ve been tampering over recent weeks have clearly addled what was left of my common sense.

I’m not going to pretend that more of these will follow straight away, I’ve got more Tzeentch and the Fembruary challenge lined up which I want to concentrate on, but I am determined that after that I’ll give the armies of Sacred Mars the love and attention they have been denied for so long.

Continuing our look through the dioramas on display at Warhammer World today we explore the section given over to the alien races inhabiting the grim darkness of the far future. First off we have this lava board, showing the planet of Valedor – or Düriel to the Eldar – being swarmed by the Tryanid hive fleets. 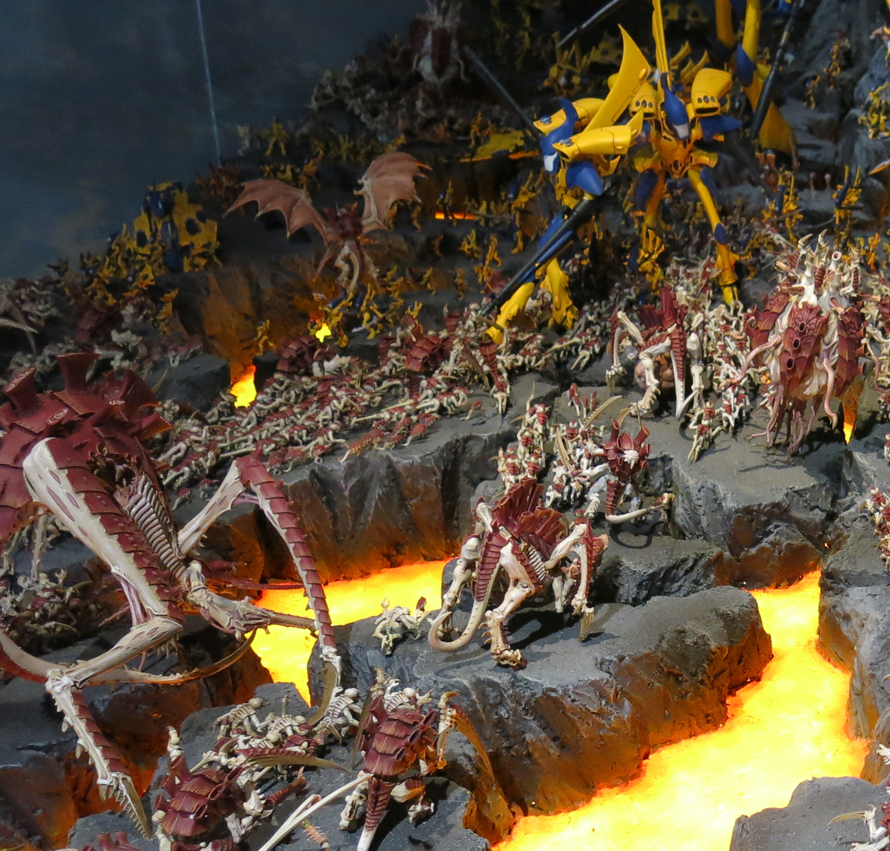 At one point Valedor was a tropical paradise but, as is the case with most places in 40k that seem like they might be really nice, that wasn’t to last. First the Imperium turned it into an industrial hellhole, then the Tyranids arrived and began stripping it of all organic matter. By the time the Swordwind of the Eldar return to what had once been one of their Maiden Worlds the whole place was rather worse for wear. Eventually the Eldar activate a device known as the Fireheart, splitting the planet’s crust into the volcanic turmoil we see here. 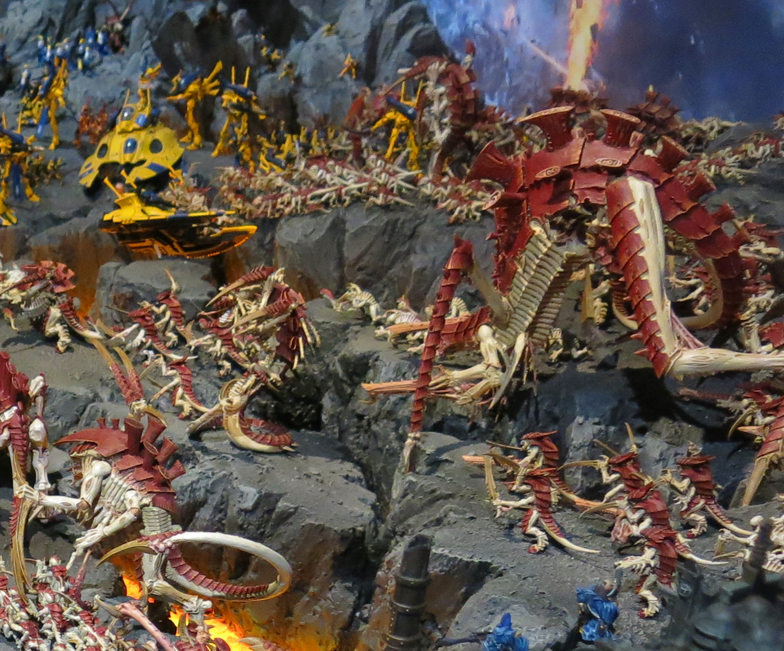 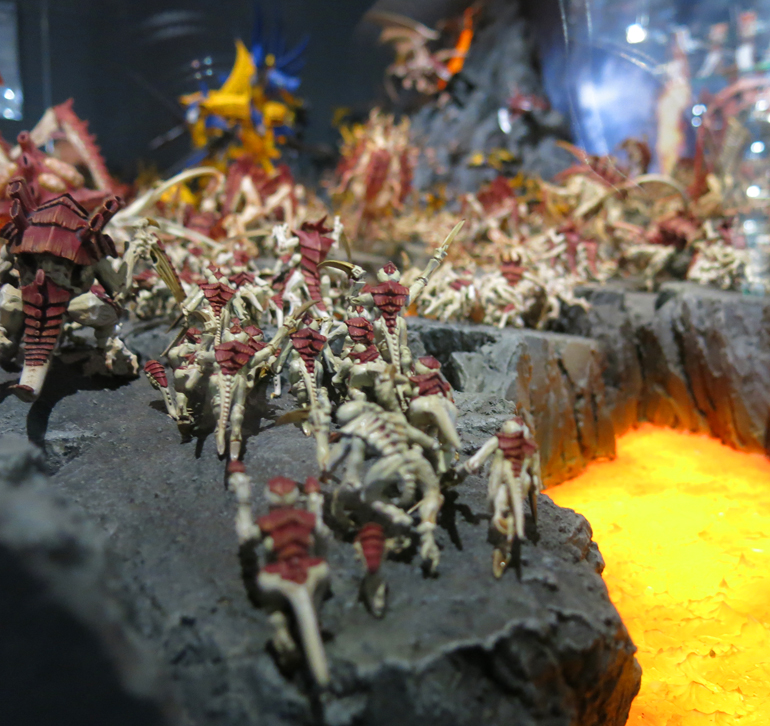 Both factions are really giving it their all here; the Tyranids have deployed their bio-titans (above) whilst the Eldar respond with their Phantom Titans.

Another display I’d been looking forward to was this one; Ork Town – originally built by Forge World for their book Raid on Kastorel-Novem.

A squad of Tempestus Scions have been shot down in Ork territory and now their allies rush to evacuate them. Apparently an ex-army store manager spent a day training the team in how to descend on ropes from an aircraft in order to capture the scene perfectly. Frankly I’m sure they could have worked it out from Youtube videos but who can blame the chancers for convincing their boss they needed a day out? 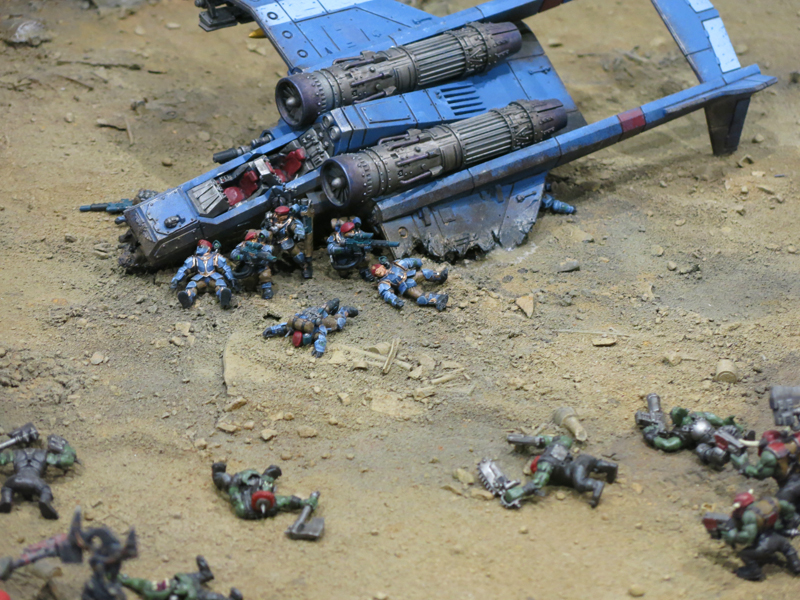 Lastly for today we have the Tau facing off against their enemies in the Mechanicum. Both sides are rather fond of technology although the Tau’s habit of innovating, plus their insistence on being filthy xenos, prevents them from being friends. Plus the Mechanicum almost obliterated the Tau when the latter species was still in the stone-age, something that is bound to sour any relationship. 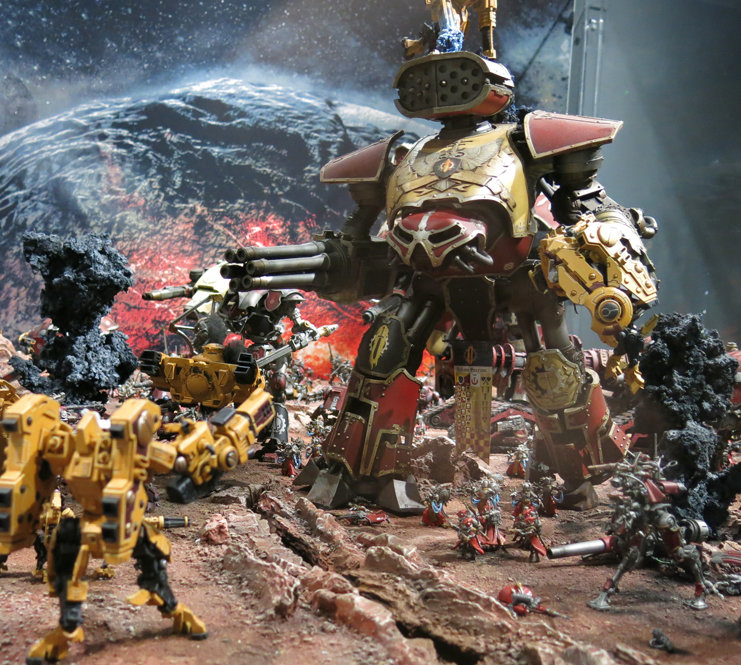 A rather large Tau flyer. Probably named after a fish.

One of the Tau flying-mech-suits (which, if it’s not already clear, I’m not too familiar with) annoying a titan. 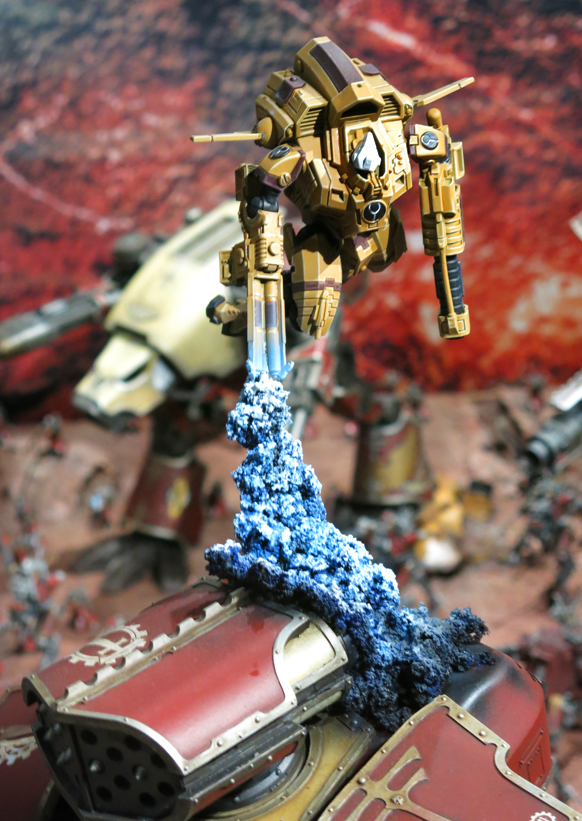 Something I found particularly clever about these dioramas is the way in which the eye is drawn to certain angles, which themselves provide cinematic scenes. Take this Sydonian Dragoon for instance, which strides through the periphery of an explosion with the effortless cool of an action movie hero.

Remember those Imperial Guardsmen standing grimly in their cold trenches I showed you yesterday? This is the Tau equivalent, and it’s just a tiny bit more glamorous!

This encounter perfectly encapsulates the dynamic (pun intended) between the energetic Tau and the trudging, hidebound Imperials. 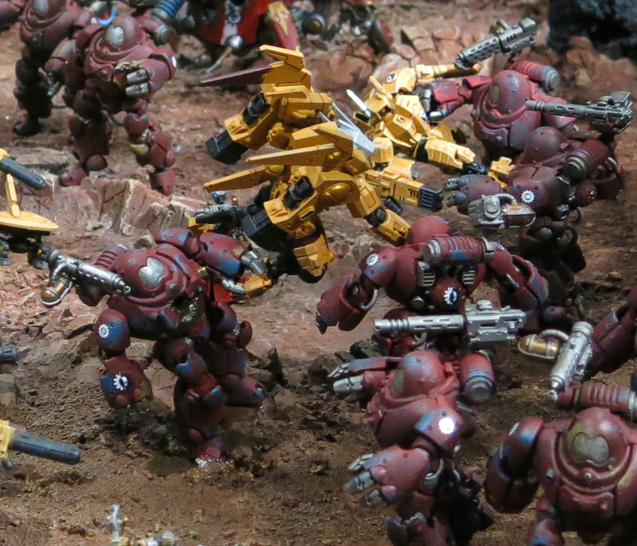 I feel there’s a joke to be made here, either about getting legless or going topless… 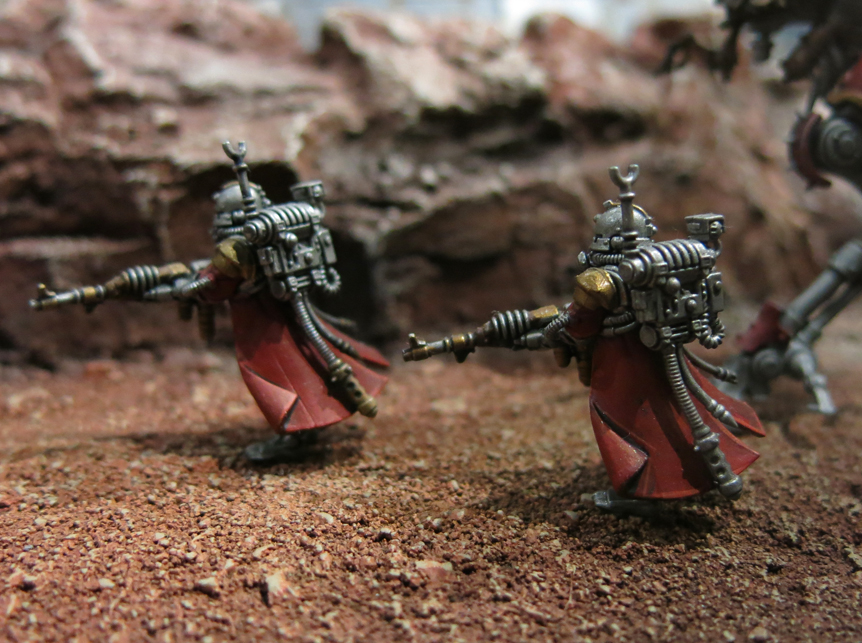 The Mechanicum politely explain to the Tau that what they have are not guns, this is a gun…

Now some of you might be thinking “Hey guy, where’s Chaos in all this? I thought they were the big bad in the 41st Millennium? Don’t they get a diorama?” Oh they do my freind, they certainly do – but for that you’re going to have to wait until tomorrow…