I’ve had this model for a long time, at least five or six years but possibly longer. I’ve been meaning to get him painted up as part of my underhive civilians collection (not to mention the fact that any Inq28 collection that doesn’t include him is really missing a trick) but what finally pushed me into action was spotting the Data-Scrivener in the House of Artifice book. Each gang in Necromunda can now take a range of hangers-on; these being the servants/assistants/allies of the gang who live in their hideout and enjoy the protection of the gang, but don’t generally get their hands dirty with any actual fighting.

Data-Scriveners are the futuristic hackers who specialise in stealing data from the hive’s ancient cogitators and manipulating them to suit their purposes. There are pretty strict rules about misusing technology in the Imperium but down in the underhive rules are there to be broken. The Van Saar, being tech-wizards to put the finest modern nerds to shame, have a habit of “liberating” whatever they feel like from the cogitator cores which regulate all the systems required to support life in the hive, and then using it against their enemies. 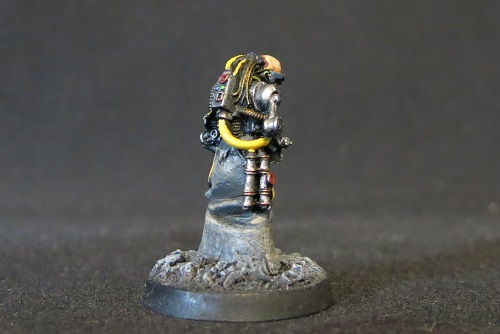 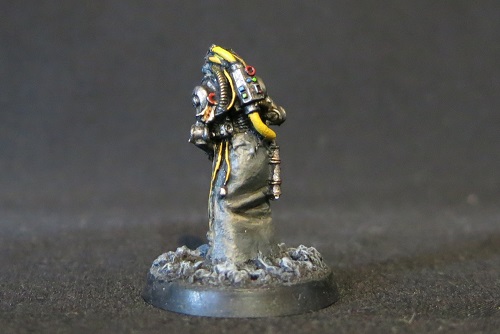 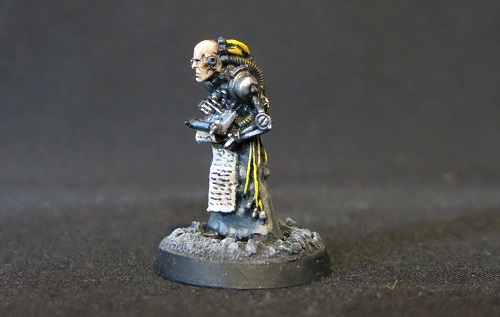 Because I want to include him as a hanger on to my Van Saar I went for a colour scheme that tied in fairly closely with the rest of the gang. 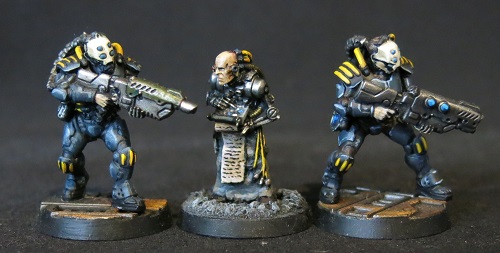 That said I didn’t to make him look so much like a Van Saar that I couldn’t use him in other roles, he’d still make a fine addition to an Inquisitor’s retinue, an Imperial Guard command post or the citizens going about their business in the hive depths. Hopefully he could even join another gang as their Data-Scrivener without looking too out of place.

Of course, having been in my possession for ages without seeing a lick of paint, he’ll be another contribution to the Neglected But Not Forgotten challenge being run by Ann’s Immaterium.

As promised the explorers risking life and limb in the darkness of the Blackstone Fortress can now be joined by the servitor X-101. Of course I won’t let the occasion pass to complain that GW really ought to provide us with some more servitor models, there are few things as evocative of the 41st Millennium and the few existing miniatures for them are hellishly old. Every Imperial faction could use a few servitors and gangs of corrupted, malfunction servitors would be a wonderful addition to Necromunda. 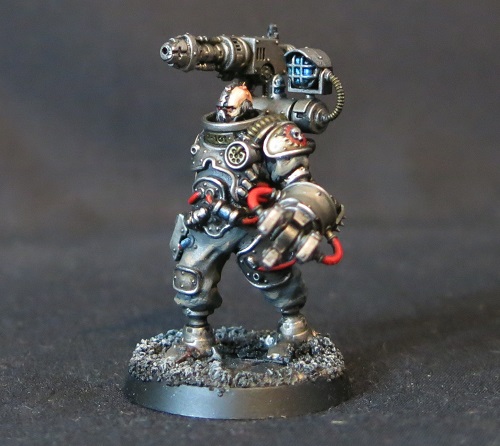 All in all he was remarkably quick and straightforward to paint and so I’m feeling enthused about tackling some more Blackstone Fortress models, perhaps finishing off the last few heroes from the original game or turning my attention to some of the expansions.

If You Want To Get Ahead…

Remember the skullcrab from Black Edge I painted way back in June? It’s just a cracking little model, packed with character – what could better encapsulate the essence of 40k than a tiny robot-spider made from someone’s skull (presumably someone with quite a big head mind you)? Alas, for various reasons, the other two skullcrabs have sat untouched ever since. Inspired by the skullbirds however I realised it was time to expand my collection of skull-headed fauna and finally get them painted. 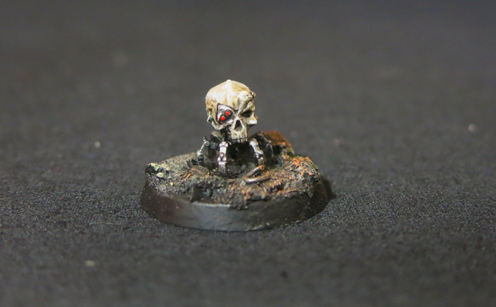 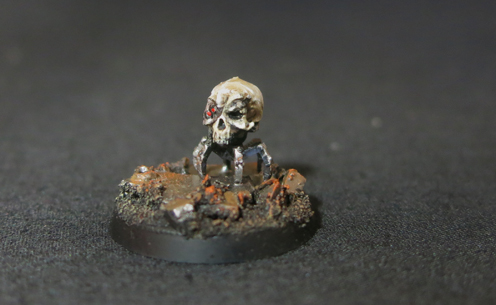 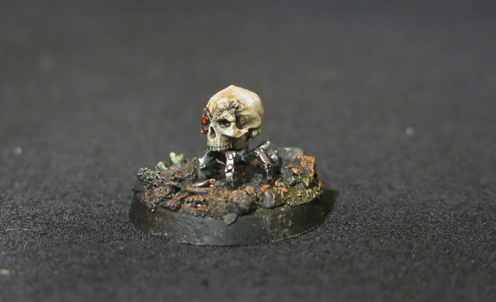 A group shot of the three finished skulls together. Checking the Black Edge store I notice that the skullcrabs aren’t currently available – although I’m hopeful that Mark (of HeresyOfUs – and the man behind Black Edge) is working on them, alongside his various other twisted and brilliant creations.

As the Imperial forces advance a scuttling wave of skullcrabs travels ahead of them.

Whilst I had skulls on the brain (surely a normal state of affairs) I nabbed this servo-skull for a quick repaint as well. 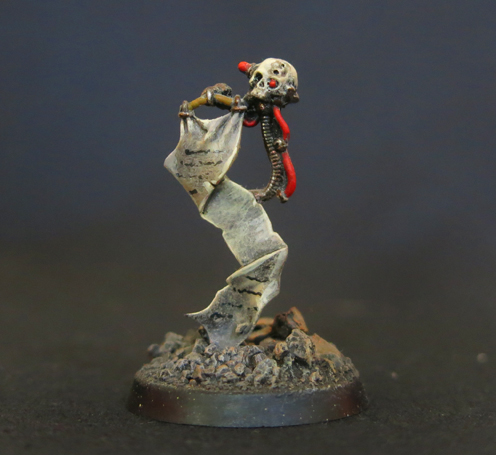 You really can’t have too many cherubs, servo-skulls and other skull-faced cyber-creatures in 40k so I’ll try to build some more in the near(-ish) future – watch this space!

It sees my lack of fidelity to a single god is a crime from which I must now atone. Having failed to serve Nurgle faithfully he has struck me down with a particularly virulent sickness of the cold/flu/lie around feeling naff variety. Sadly this has made painting and modelling somewhat nonexistent.

Never mind, the show must go on! Whilst visiting my parents over Christmas I found a few old models tucked away that I don’t think I’ve shown before and I thought might be of interest. Before we take a look at them however let me add a quick caveat. These aren’t the best models I’ve made but maybe there are some ideas in here that could be salvaged for future schemes, or which might inspire one of you at some point? Who knows? Either way perhaps if the ideas are shared something might come of them in the future – and if they aren’t at least it fills in the time until I’m recovered!

First off here’s a Space Marine I put together when playing around with ideas for a new chapter. 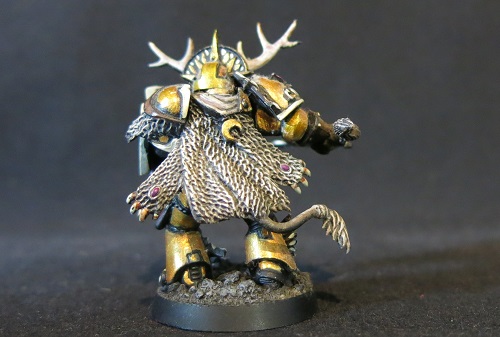 Overall I’m still rather pleased with him, especially as he’s quite old now. I don’t find gold an easy colour to work with (so quite why I chose it who can say?) and with a critical eye the antlers look a little bit big. He also lacks a backpack (a cardinal sin!) but I couldn’t work out how to attach it without fouling the cloak (which I reckon is probably the best bit of the model). Mostly though he seems a little small. I’m not a true-scaler (total respect to the guys who do that but I’ve never had that much commitment to Space Marines) but I have at times wondered about resurrecting this guy’s chapter (perhaps without quite so much obvious Blood Angels iconography), writing some background for them, and putting together a few ‘actual size’ Space Marines based off this idea. Of course, if I ever did try anything like this, I’d need to create a few chapter thralls to accompany them – which brings us to this second model. 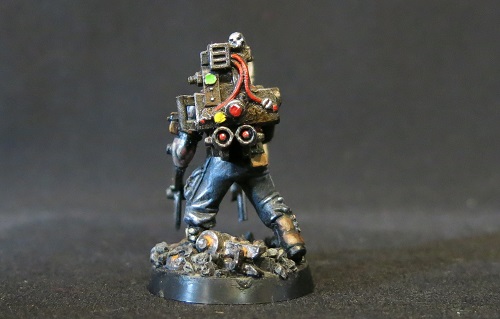 I’m not sure that he holds up as well as the Space Marine does, although there are still elements about him I like. The Bretonnian hooded peasant heads always add an element of rustic grime to Imperial serfs and the banner has held up well. Sadly for him however he was built in the dark ages before the release of the Skitarii when pretty much the only human sized bionics came from ancient (even then) Necron warriors. At the time I also thought I was really pushing the boat out using an Ork axe to make a backpack. Again though I feel there are good ideas here, it’s just that my ability to execute them hadn’t really developed yet. In my defence I was also working with a considerably reduced pallet of bits compared to what’s available now. Certainly were I to attempt this now I think it would be a fairly straightforward model to create, so perhaps there will be a life after death for him after all.

Anyway, hopefully you enjoyed this little look into the archives. All being well, or more specifically me being well, there should be some traitor guard headed this way soon. In the meantime comments are always welcome.