A Right Pile Of Potential

Earlier today I was looking through some of the blogs that I follow, sipping at my coffee and looking blearily out at the world around me much in the manner of a hibernating mammal forced out of its den. Some people start the day with the news but I like to have at least a pint of the black stuff (coffee for those times when Guinness isn’t socially appropriate) before I dare to expose myself to that much rage and misery, so I turn my attention instead to what, if anything, my fellow hobbyists have managed to produce overnight. In this case it was this post from Scent of a Gamer which caught my attention and got me thinking about something which I’ve considered writing about for some time – “The Pile of Shame vs the Pile of Potential”. I started to write a comment in reply and it grew and grew into something so sprawling and lengthy that I decided to post it here instead.

Firstly allow me to recommend, if you haven’t already, that you take a look at that post on Scent of a Gamer and indeed the blog in general – it’s well worth reading at the best of times and this post is very much a reply to it. We’re talking, to quote davekay himself, about “something every wargamer has: the pile of shame. Those unpainted miniatures bought on impulse or with intent years ago, but never touched”. 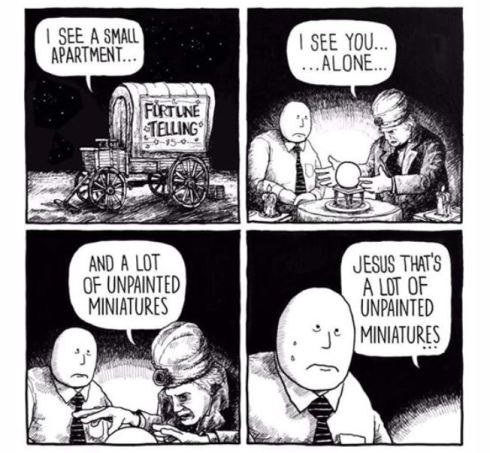 He also links to a video by Goobertown hobbies which isn’t a channel I’ve watched before, in which the presenter digs through a (vast) collection of unpainted miniatures looking for something which takes his fancy to paint – a process which I’m sure will be familiar to many of us. I’ll confess that I didn’t watch all of the video, there’s only so long you can look at a man showing off how many miniatures he’s bought over the years whilst listening to elevator muzak, but I enjoyed what I saw and I’ll take a nose at the rest of his channel when time allows.

I’ll admit too that I had a moment of being “triggered” (as da yoof would have it) into a brief rage when he produced a copy of the Looncurse box out of his stash – a box I myself craved as the start of my long-planned Sylvaneth army, with a whole heap of lovely Night Goblins thrown in for good measure. Looncurse famously sold out in next to no time and I missed out, so it was damn annoying to see someone else proudly admitting to having snagged a copy and not even touched it. On the other hand, I realised with a growing sense of discomfort, I picked up various other kits at around the same time which I’ve yet to do anything with so could I honestly say I wouldn’t have neglected my own copy in just the same way?

This isn’t the first time I’ve had the pile of shame on my mind lately. In fact, a recent inventory of my unpainted collecting revealed a worrying fact – there’s a hell of a lot of it. Years of bargain hunting and snapping up good deals have taken their toll and the “to paint” pile has grown into a mountain large enough to influence the local climate. By my rough count, assuming that I keep painting at my current rate (something I wouldn’t bet on by any means) it’d still take me several years to clear the backlog. Add to that the forthcoming releases for Necromunda and Warcry, the new Space Marines (which would go very nicely with my existing collection), the new Necrons (and you know I’ve always thought a Necron army would be cool…), the mate who’s slowly but surely convincing me to try out Bolt Action, and whatever else emerges over the coming months and years and it starts to feel as though the lead mountain and the grey tide are very much here to stay. 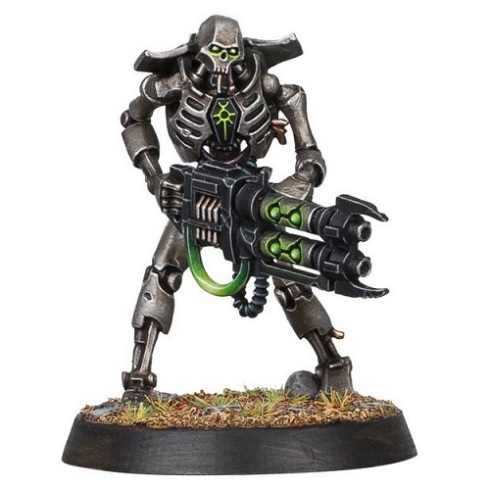 I don’t like the term “pile of shame” very much. Shame is a terrible emotion, and rarely one that inspires us to action. Excitement and enthusiasm is what gets us to pick up the brushes, whilst shame and embarrassment put us off, killing the joy that our hobbies are intended to engender and starving us off the passion that would otherwise help to overcome the unpainted masses.

At the end of the day miniatures are there to be enjoyed. A particularly good game can stay in the memory for years, even decades. There are plenty of ways of making that happen of course, and for me some of the most memorable contained no painted miniatures at all (indeed in a few cases no models were involved, just blank bases with post-it note labels to tell us what was what and a whole load of imagination). However it’s a fairly safe generalisation to make that well painted miniatures on thematic terrain will stick with us longer than unpainted models on a bare kitchen table. Add to that the fact that “check out this model I painted” is a far more engaging conversation starter than “check out this stuff I just bought and will now shove under the bed and never touch or look at again for as long as I live” and we find ourselves drawn to an inevitable conclusion; our hobby ought to have as its crux the collecting and painting of miniatures. A large number of us however would be hard-pressed to deny that our hobby is collecting unpainted models, with assembling, painting and gaming a sideline at best.

Why won’t you paint me? I’m so beautiful…

On the other hand I really don’t like the term “pile of potential” either. The implication is very much that ending up with lots and lots of unpainted models is something to be celebrated, that buying things and then never painting them is inherently a good thing to do. This is quite a comforting idea, after all I have lots of unpainted models already, and there are new things that I’d like to own, and I’d far rather be telling myself that adding to this great mountain of plastic and lead and sitting on it like Smaug is something to be proud of. However I can’t shake the feeling that actually it’s just profligate, that all I’m doing is showing off how much money I would have had in the bank if I hadn’t squandered it instead on miniatures that I’m not painting.

I know that I’m not just speaking for myself here, I’m also undoubtedly addressing something that a lot of my readers will be very familiar with from their own collections, and I’m not trying to make anyone feel bad. After all we’re not really doing much harm, we’re not selling drugs, stabbing grannies or mismanaging the national response to a pandemic, we’re just hoarding bits of plastic. On the other hand I’ve never looked at a miniature and thought “I’d love to store that somewhere and be vaguely embarrassed that it’s cluttering up my house”. Quite the opposite in fact, I want to paint them, perhaps even play with them.

So how to go about it? Well there are a few tricks that have helped me over the years. Firstly, although I’m an occasional gamer at best, planning a game in advance is a great motivator to get something finished. I’ve boosted Necromunda gangs, Warcry warbands and the contents of Blackstone Fortress over the finish line using exactly this method.

Then there’s the old “model a month” trick. Some readers will already be familiar with this, as I’ve described it often enough in the past, but for anyone who’s not encountered it the premise is simple; paint at least one miniature for a project every month (for a year, or until it’s done – it’s up to you really). Now one model isn’t very much, especially when you’re dealing with a horde army like the Skaven (as I was). However Newton’s First Law of Motion can be applied here; Objects in motion tend to remain in motion, objects at rest remain at rest. If you’re painting one clanrat it’s easy enough to paint a second or perhaps even a third, and then your enthusiasm for Skaven is rekindled, you remember what it was about the project that made you want to paint hundreds of the little bastards in the first place, you get some more work done on the warp-lightning cannon whilst you’re waiting for the shade to dry and the whole project keeps shambling forward. Leave them sitting, allow them to gather dust, push them to the side of the desk and finally pack them away and months, then years will go past without so much as a kiss of a brush upon a ratty whisker. By applying this method I went from this (at the beginning of January 2017)… 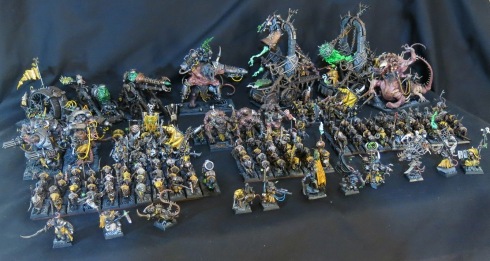 Another trick I’ve been applying recently is simply to keep track of exactly what I’ve added to the collection. I keep a note of what I’ve bought each month and I check it before I buy anything else. For one thing this is just sensible fiscal prudence, but more than that it helps to remind me of all the things I was really excited about before I saw the thing I’m currently really excited about. More than that I also keep a note of all the models I’ve painted this month as well, and I aim (although of course I don’t always succeed) to make the latter number bigger than the former. It’s early days yet, I’ve only been doing this for a few months, but so far it’s helped me a great deal in keeping on top of the “pile of unrealised projects” and even helped me chip away at it a little, so I may come back to it and talk about it more in the future if it proves to be useful in the long term.

Finally, the most valuable tip I ever received was “paint what you’re passionate about”. If you’re excited about painting something then get on and paint it. If you want to paint something you’ll find the time to paint it, and if you don’t want to paint it you’ll find an excuse. Enthusiasm for a project will do far more to get you painting than all the tips, tricks and tutorials in the world and when that enthusiasm inevitably drains away to be replaced by something else you’ll have done a lot more than if you didn’t act on it.

Do you have a pile of shameful potential, and if so how do you tackle it? As usual if you have words of wisdom to share I want to hear all about them and the comments box is open to all comers.