The first Ork (and indeed the first Games Workshop miniature) I ever painted was a Meganob. At the time I knew next to nothing about the setting and picked the model based purely on its wonderfully belligerent aesthetics. Here was an Orc/k, a creature I’d grown up with through Lord of the Rings, stamping around in a suit of armour it appeared to have made by ripping up a tank – probably with his bare hands. The codex that I bought to accompany him describes how, so great and unwieldy is his bulk, a Meganob hit by a shell is likely to be found on his back, unharmed but struggling to right himself, often with the help of his straining comrades – something I’ve long wondered about converting.

However, in spite of my love for the model, it was also a little on the small side (given what it was intended to represent), heavy, rather expensive and prone to break (his jaw has to be glued back on every few weeks). Thus I refused to buy another until there was a decent boxset of plastic miniatures available. Even then I’ll confess it took me a while to get around to it but here we are at last with the first of a new mob.

And here he is with the first of his kind – demonstrating that GW’s model making and my painting have both come on a long way!

When I first started my Ork collection (seven years ago now? Longer?!) I set myself the challenge of never using the same head more than once on any of the infantry models. It’s a subtle little trick but it really adds to the sense of (small ‘c’) chaos and lack of uniformity in an Ork army, and helps to maintain that general aesthetic of unruliness in the face of unifying elements like a common colour scheme. It’s also very practical to achieve, there are just so many Ork heads available between the 40k and AoS ranges, without even starting on all the third-party companies out there.

Until now I’ve managed to stick to it. This gasmask from Spellcrow though – just too cool not to use twice!

Continuing our look through the dioramas on display at Warhammer World today we explore the section given over to the alien races inhabiting the grim darkness of the far future. First off we have this lava board, showing the planet of Valedor – or Düriel to the Eldar – being swarmed by the Tryanid hive fleets.

At one point Valedor was a tropical paradise but, as is the case with most places in 40k that seem like they might be really nice, that wasn’t to last. First the Imperium turned it into an industrial hellhole, then the Tyranids arrived and began stripping it of all organic matter. By the time the Swordwind of the Eldar return to what had once been one of their Maiden Worlds the whole place was rather worse for wear. Eventually the Eldar activate a device known as the Fireheart, splitting the planet’s crust into the volcanic turmoil we see here. 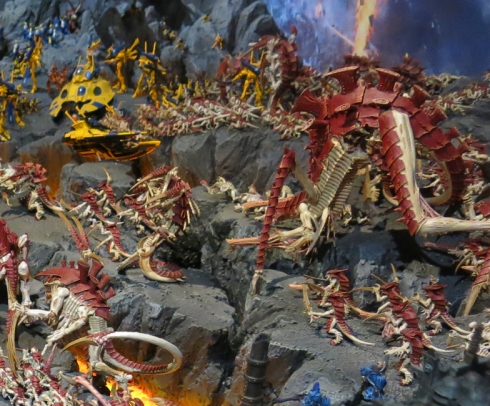 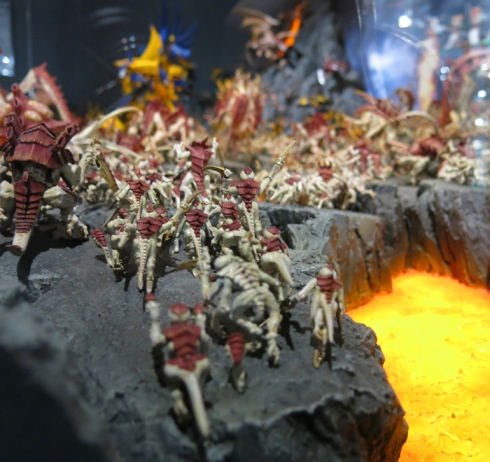 Both factions are really giving it their all here; the Tyranids have deployed their bio-titans (above) whilst the Eldar respond with their Phantom Titans. 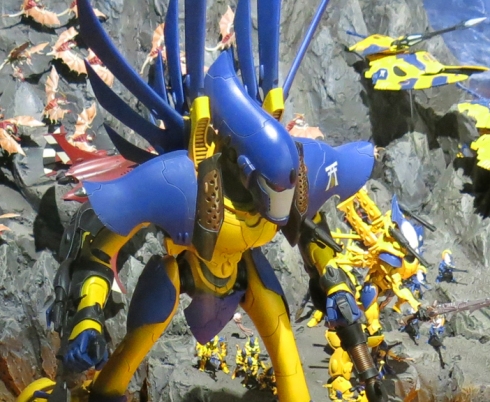 Another display I’d been looking forward to was this one; Ork Town – originally built by Forge World for their book Raid on Kastorel-Novem. 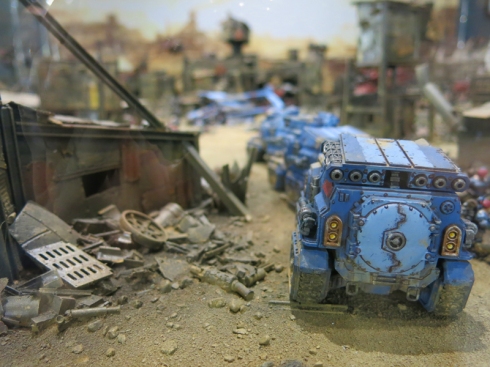 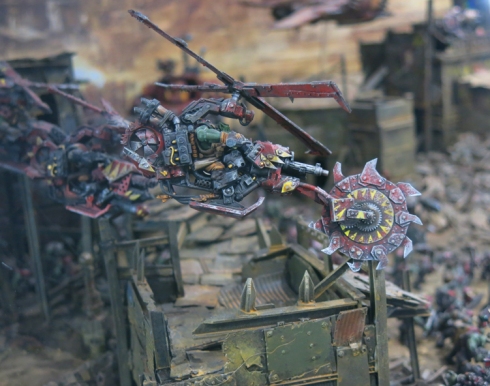 A squad of Tempestus Scions have been shot down in Ork territory and now their allies rush to evacuate them. Apparently an ex-army store manager spent a day training the team in how to descend on ropes from an aircraft in order to capture the scene perfectly. Frankly I’m sure they could have worked it out from Youtube videos but who can blame the chancers for convincing their boss they needed a day out? 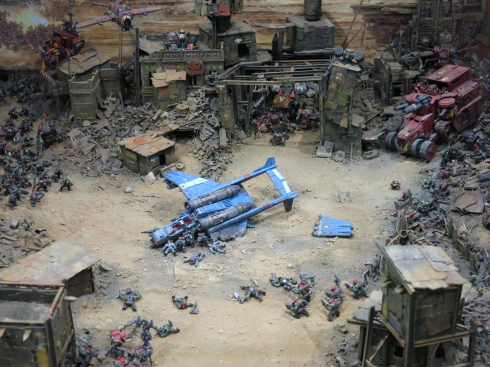 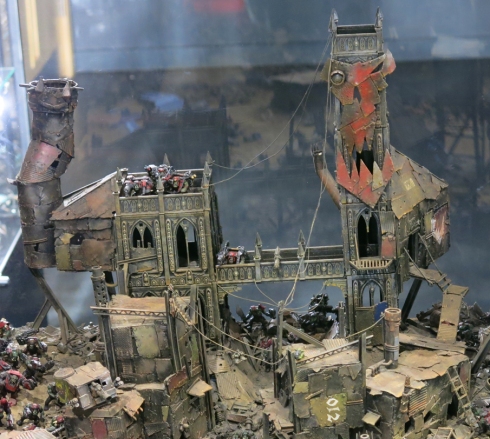 Lastly for today we have the Tau facing off against their enemies in the Mechanicum. Both sides are rather fond of technology although the Tau’s habit of innovating, plus their insistence on being filthy xenos, prevents them from being friends. Plus the Mechanicum almost obliterated the Tau when the latter species was still in the stone-age, something that is bound to sour any relationship.

A rather large Tau flyer. Probably named after a fish. 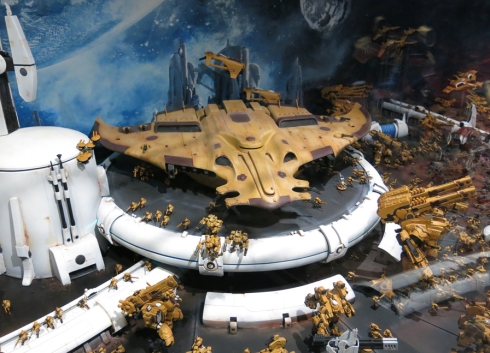 One of the Tau flying-mech-suits (which, if it’s not already clear, I’m not too familiar with) annoying a titan.

Something I found particularly clever about these dioramas is the way in which the eye is drawn to certain angles, which themselves provide cinematic scenes. Take this Sydonian Dragoon for instance, which strides through the periphery of an explosion with the effortless cool of an action movie hero. 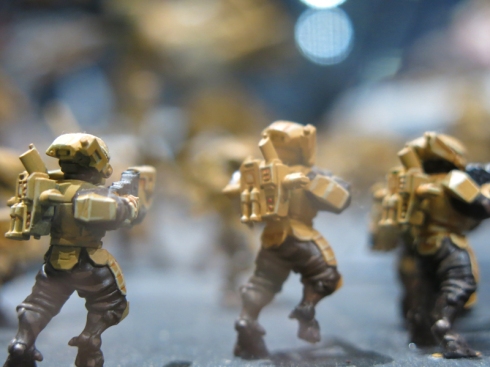 Remember those Imperial Guardsmen standing grimly in their cold trenches I showed you yesterday? This is the Tau equivalent, and it’s just a tiny bit more glamorous!

This encounter perfectly encapsulates the dynamic (pun intended) between the energetic Tau and the trudging, hidebound Imperials.

I feel there’s a joke to be made here, either about getting legless or going topless… 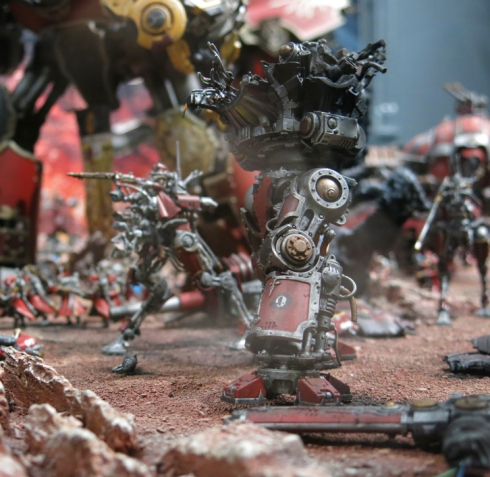 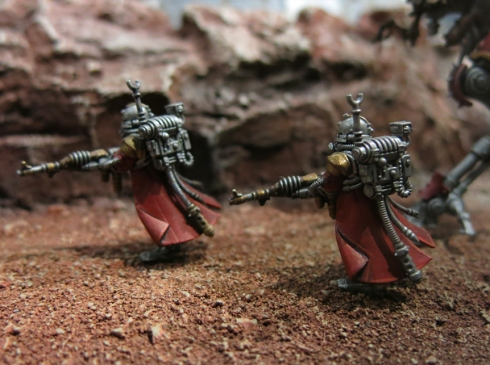 The Mechanicum politely explain to the Tau that what they have are not guns, this is a gun… 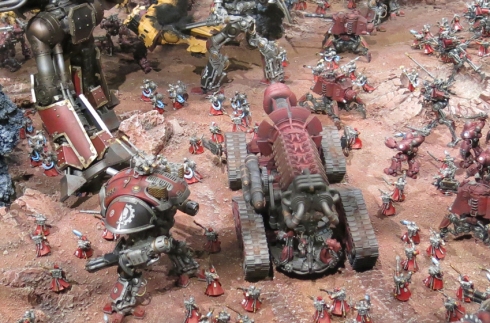 Now some of you might be thinking “Hey guy, where’s Chaos in all this? I thought they were the big bad in the 41st Millennium? Don’t they get a diorama?” Oh they do my freind, they certainly do – but for that you’re going to have to wait until tomorrow…

This Blog Belongs To Da Orks

So the Orks are on the warpath, not merely in Games Workshop stores around the world but also all over my painting desk. As I mentioned last week I’ve been trying to restore my old Ork army, touching up and improving paintjobs, fixing broken models, making improvements and so on. Over this last week or so work on my Laughing Faces tribe has continued to accelerate, fuelled by excitement about forthcoming Ork releases. 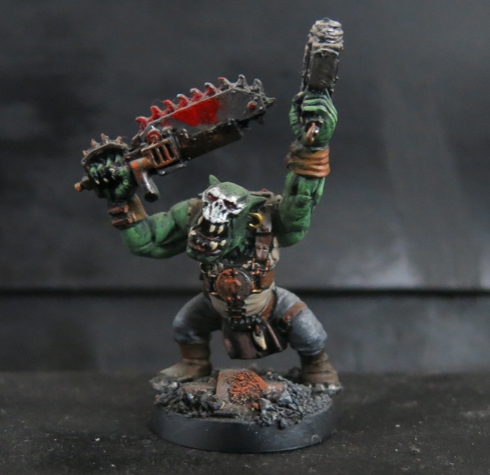 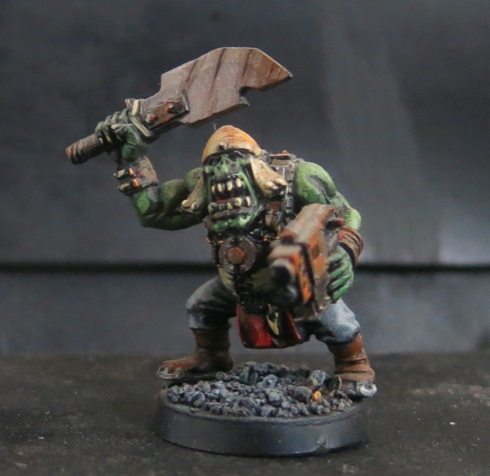 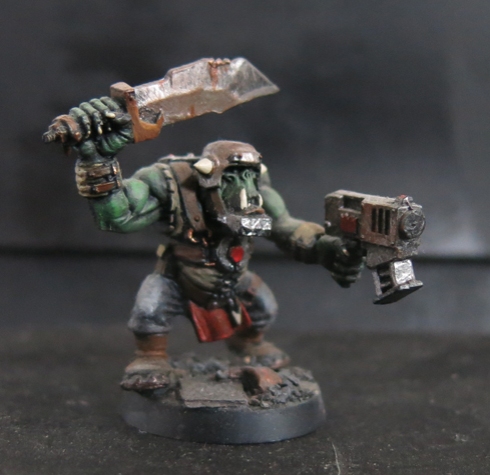 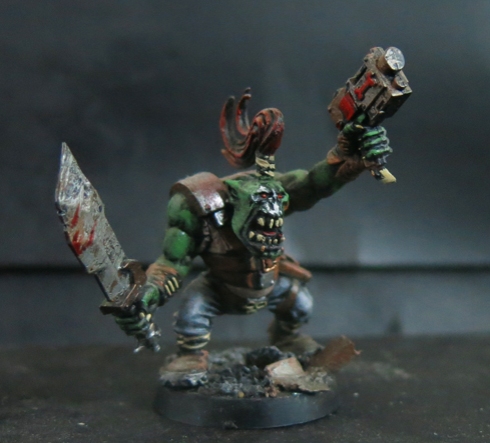 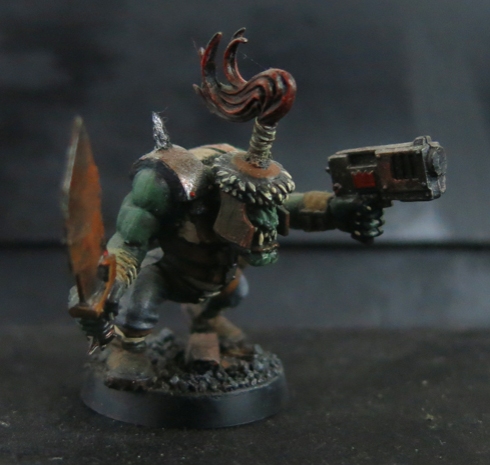 Here’s the mob I’ve updated so far. All together now boyz; WAAAAAARGH!!!

Flash Gitz
This weekend we also got a proper look at a new Ork kit, the (very, very long awaited) Flash Gitz. Flash Gitz are everything an Ork should be; loud, crude, ridiculously over-armed and utterly lacking in any approximation of common sense. Even at first glance this kit has that by the bucket load. Some people have already bemoaned the fact that this isn’t a dual kit (that is to say, one that produces two different units by exchanging different components on the same base model). I’d say this is even better. With all the spare gubbins in this box you could spread good humoured (small c) chaos through a whole army. For an Ork fan (or even, in the case of some of the components, an Orc fan) looking for the sort of boisterous, over-enthusiastic good humour that makes the greenskins great this kit looks like being a real treasure-trove.
Anyone can kitbash, it’s no longer the case that converting unique miniatures is the sole preserve of sculpting geniuses with a natural affinity for greenstuff (they’ve moved on to even wilder, weirder and more inspiring projects as a quick glance around the internet will affirm). Option laden plastic kits like this have democratised the hobby to a truly wonderful extent. No matter your skill level the models you want in your collection are increasingly within your reach. Thus whether you want Flash Gitz in your collection or not there’s something for every Ork fan here. Oh and the targeting squig is just amazing, my favourite element of the old metal/finecast model reborn in plastic. And there’s a mechanical arm holding a cutlass? Need I say more?
What are your thoughts? Are you painting yourself red (so you can work on your army faster) or is this release too weedy for you? Get your comments in the box below.