Glory to Khorne – the ogryn with the banner is ready for battle! 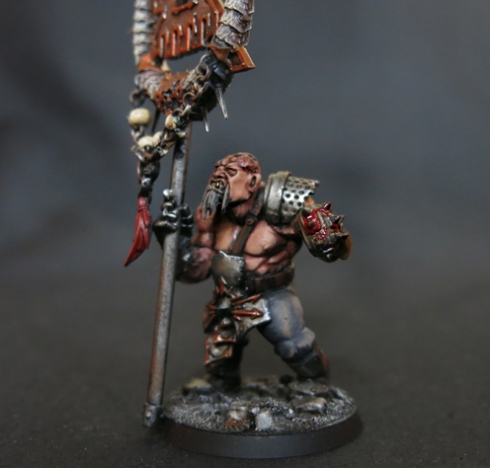 When the Age of Sigmar First Edition boxset was released I loved the look of the Bloodsecrator; a hulking warrior with a huge sigil with which to draw the Blood God’s gaze. At the time many people were still operating in an old Warhammer mindset and thought it would make an excellent battle-standard bearer for a Khorne themed Warriors of Chaos army – and indeed the whole Khornate side of the box could have translated onto square bases quite easily. In many ways the model proved adept at multi-tasking, as well joining armies in both the Old World and the Age of Sigmar it also made a natural step into the 41st Millennium, albeit with some suitable sci-fi tweaking here and there. As an avowed heretic and solider of the Long War I naturally wanted to put him to work in the latter setting. The trouble is, the banner is just too damn big for a human to carry – even a space marine, indeed even a terminator, is going to struggle to lug that great lump around. The original Bloodsecrator suffers not just from having a silly name but from being a model of two mismatched parts, the sum of which just doesn’t work cohesively. How is any warrior supposed to reap skulls whilst also struggling to hump this great, awkwardly shaped banner around the battlefield? The Imperium would undoubtedly employ a servitor for exactly this job but the followers of Khorne are far too practical for that, anything that hampers the spilling of blood or fails to get on with the job of slaughtering of one’s enemies has no place in their austere lives.

For a while I considered mounting the icon on a helbrute but in the end, partly because I’d already seen so many others do a better job of that than me, I decided to branch out and try giving it to an ogryn instead.

Seeing him next to my original ogryn berserker serves as a reminder of how much my painting style has evolved and improved over the last few years. Perhaps it’s time to give the first one a repaint too – after all I can’t have the poor old chap being outshone by his younger rival. Plus he’d make a powerful-looking repurposed mining ogryn for a chaos worshipping Necromunda gang…