Time to return to the very dankest depths of the Underhive today as we go in search of those most downtrodden of all Imperial residents – the foul and degenerate and/or unjustly maligned muties. As with the previous sets these were all based on the goblins from Games Workshop’s Lord of the Rings range, with the addition of various odds and ends from the bits box and a little bit of greenstuff. I didn’t go into any of these with a set plan, I just dug around in the leftover bits I had available and saw what I could come up with. Before we begin here’s a reminder, for anyone unfamiliar with the stock LotR goblins kit, what it was that I was working with. 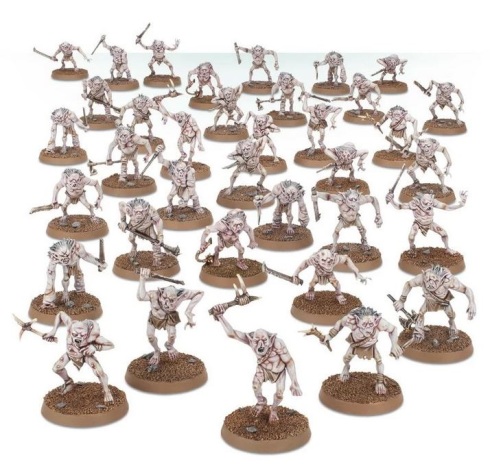 And here’s the latest additions. 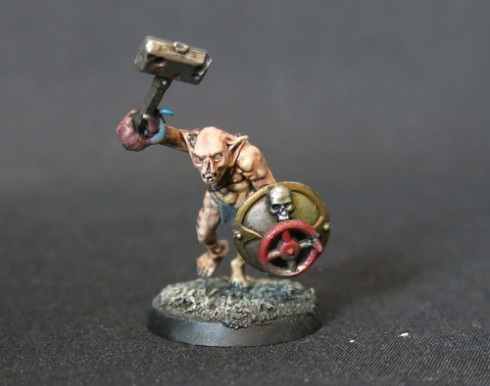 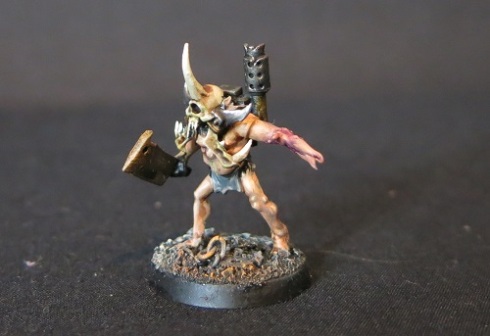 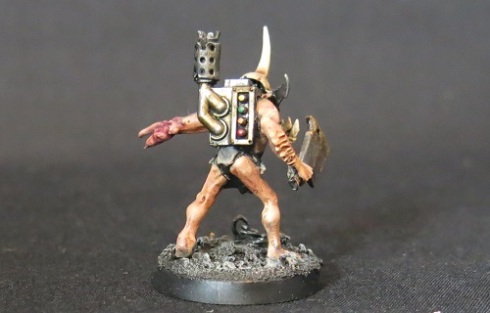 And here’s the three new recruits together.

With these three complete the mutie tribe is finally starting to look the way I want it to, a disparate clan of mismatched little monsters, individually weak but swarming from the shadows to prey upon the unwary (as usual just click on the picture to see a bigger version).

Needless to say this won’t be the last time we see these, I’ve still got a few more Goblin Town residents waiting for me to decide what to turn them into – and then there are a few more beasties that might well tie into this project nicely. Watch this space!

It wouldn’t be the dark corners of the 41st Millennium without a few muties scurrying around, suffering deprivation, being oppressed, demanding rights and turning dark thoughts to the darker powers that lurk beyond the veil… Some of you may recall that back in April I finally got around to painting up some of my long-planned tribe of mutants, models which I converted over several years based on the Lord of the Rings Goblin models. Here’s a reminder of how they look.

Now at last we have three more, ready to join the tribe. 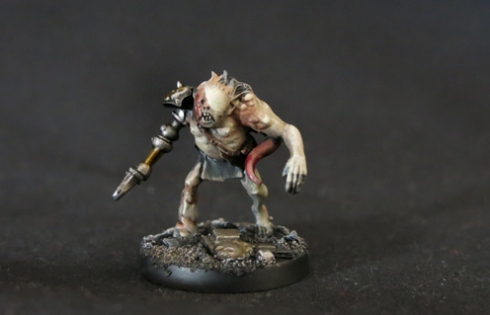 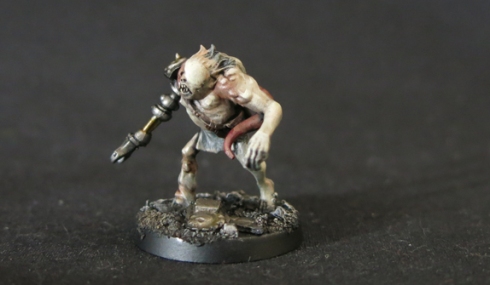 This one is actually the very first one I made – alongside the chap in the death mask from the previous set – but in the mixed up world of miniatures I only got around to painting him now. He has however had a few tweaks since he was first built, mostly to take advantage of new components as they came along – with the poxwalker tentacle being the most obvious addition. 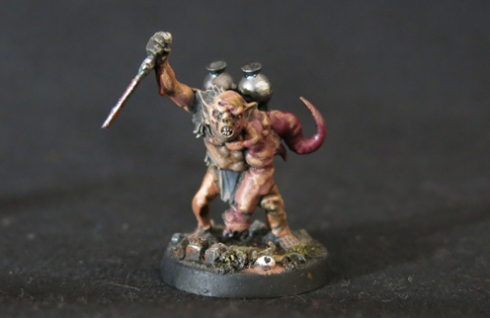 This one is one of my favourites from the whole group, a very simple conversion but there’s something chilling about him that makes me think of the worst excesses of research conducted unmonitored in crumbling asylums.

A face to give you nightmares if ever there was one!

Here’s a cheeky groupshot of the three newcomers.

And here’s the whole tribe gathered together, ready to spring out upon some unsuspecting ganger or inquisitor.

That’s not all however. Whilst I was about it I also found myself thinking about the other scavenging creatures which might be found lurking in the gloom of the Underhive. Giant rats appear to be the most prevalent form of life on Necromunda (even more common than muties!), and are probably pretty common everywhere else in the Imperium as well, so adding one to my collection of verminous critters seemed like a wise move.

I was also looking through my Chaos Space Marines collection and my eye fell on this old familiar that I painted a couple of years ago. With retrospect I don’t think I did a great job on it so, on the grounds that there’s no time like the present, I popped it back onto the painting desk and gave it a quick freshen up. 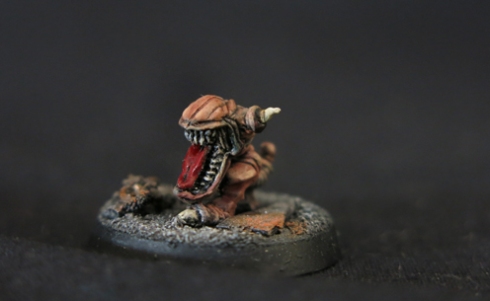 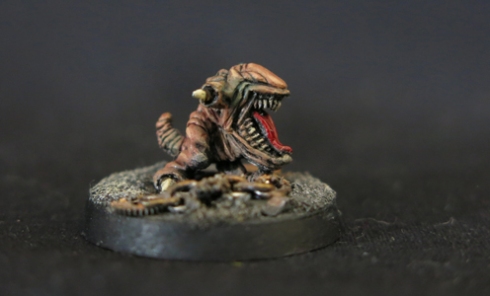 And there we have it, a few more verminous scavengers ready to sneak and plot in the deepest shadows beneath the hives. Speaking of which, the end of the month is approaching and I really need to crack on with some Skaven!

There’s a mutant for every occasion. Need a horde of luckless bullet catchers driven ahead of your advancing chaos legion? Call in the mutants. What about some low-level troublemakers for your Inquisitor to deal with? How about civilians/wildlife/scenery/lurkers-in-the-dark to trouble your Necromunda gangs? If you want to live in the seedy underbelly of 40k then mutants are indispensable. Even more so than everyone else in the Imperium they were born to lose. The 41st Millennium’s ultimate underclass they play the part of the victimised serf with a natural grudge just as well as they do the spiteful villain. Plus, the range of modelling and creative opportunities they represent are just too much fun to pass up! 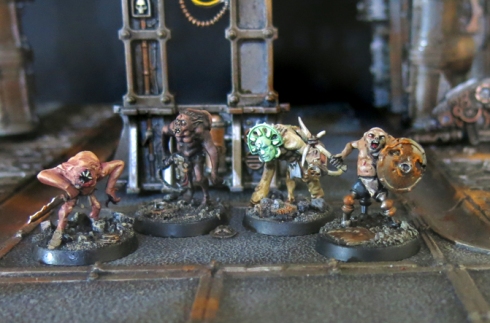 This is a project I’ve been working on for a ludicrously long time, some of these models have been sitting around half-painted for at least five or six years, so I reckoned it was about time I actually bashed on and got something finished. All of the current batch are based on the Lord of the Rings goblins, which make for excellent mutants in and of themselves. Indeed some, like this chap, I’ve painted up entirely “as is”, without needing to do any converting at all.

Others, like this one, are a bit more radical. Although the goblin models themselves aren’t multipart kits they really forgive cutting them and sticking on bits from other kits, and on such lumpen, ugly-looking characters even the crudest greenstuff can cover a multitude of sins. 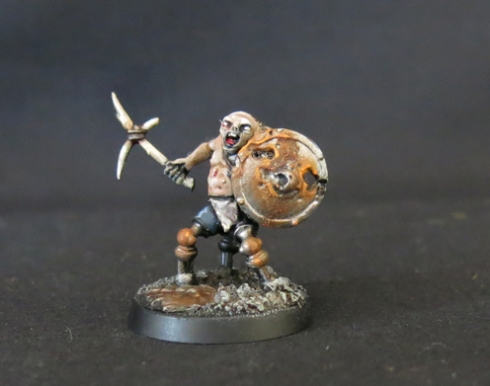 This one was the first to be finished, several years ago now, but the slow progress of the project as a whole meant I decided to go back and give him a bit of a repaint by the time the rest of the clan were nearing completion.

There’s something about this one that even gives me the creeps! 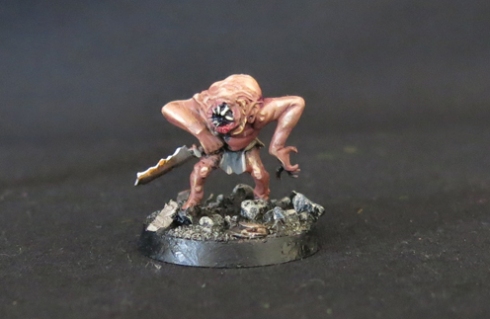 This chap is one of my favourites, a task-master who really does have eyes in the back of his head! 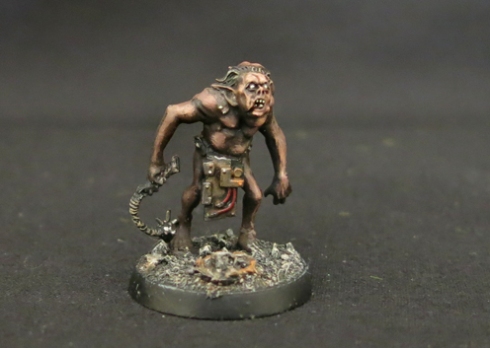 As intimated by the “Part 1” in the title I’ve got quite a few more of these still to finish so I’m aiming to bash on with them alongside other projects. Despite the fact that in some ways I feel that I should be concentrating on one thing at a time and getting a few things finished these have been waiting for attention for so long it’s getting embarrassing so I’m keen to get them done once and for all. Hopefully it won’t be another five years before we see “Part 2”!