Tag Archives: Lost and the Damned

I promised you the final two members of my rogue psyker coven and here they are. First up we have this sinister individual. 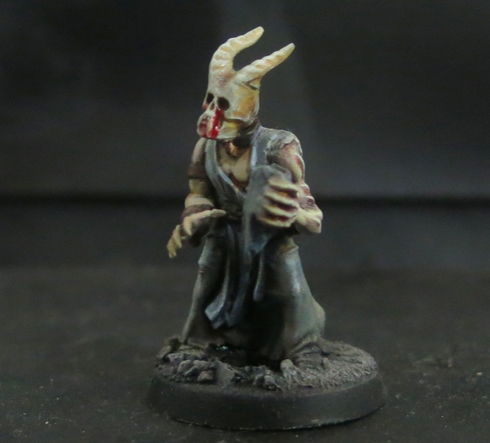 And here we have the squad’s leader, or at least the first amongst equals, the most blessed who shows his face openly so that all see the mark of the gods upon him. 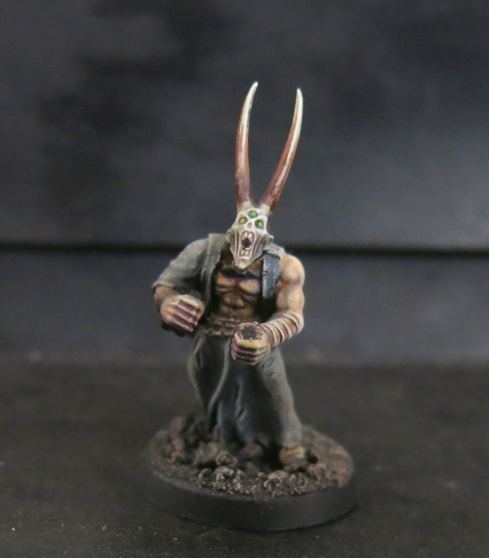 And here’s the whole coven gathered together and ready to perform some strange and unnatural rites!

Our Doubts Are Traitors

Somehow, and I’m not quite sure how this has happened, I appear to have concentrated and painted another full squad of traitor guard without getting distracted. It may be because the lost and the damned are so riveting to convert and straightforward to paint – or it may simply be the will of the dark gods themselves. Either way I now have a second ten man squad wrapped up. Let’s take a look at the final two additions.

First off there’s this thuggish individual. Truthfully I see a lot of flaws in him; I’m in the middle of moving house and decided I wanted to get him (and thus the squad) done before I moved. Perhaps that’s led to me rushing him a little (…excuses, excuses…), perhaps I’ve just started to have artistic-doubts about how he’s turned out. Either way I think I’ll probably go back to him soon and make some adjustments.
However there are some things about him where I’ve pushed myself and feel I’ve really nailed the result (the ragged skin tabard for instance was an experiment in using greenstuff which I didn’t really expect to work but feel has come out nicely).

And in case anyone still thought he was just a loyalist courting a reprimand for failure to take care of his allotted weaponry a view from the back should settle the matter beyond any doubt.

Does he give you the creeps a little? He certainly does me… 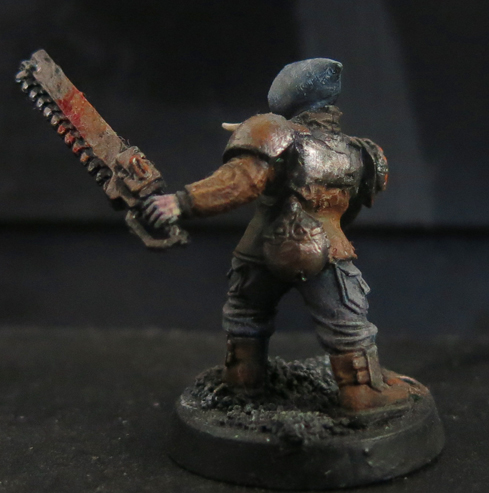 Anyway, this calls for a family photo of the whole squad together (you know how this works – click it to see them properly).

Next week I should be able to sit down and work comfortably so expect even more villainous treachery then. In the meantime if you have any thoughts at all the God-Emperor’s Devoted Inquisitors want to know about it! Submit them for scrutiny in the comments box below.

In Ashes They Shall Reap

Another day, another vicious tech-barbarian joins the ranks. Was it the cajoling of heretic priests that led him from the righteous path, or was it the calling of his own dark nature? What nightmares now drive him on, what whispering voices pursue him in his sleep, what rictus scream twists his features behind that mask?

What about this mutant? Did desperate pacts with the dark gods see him changed, tormented in flesh and recast in spirit to become the creature we see now? Or did he live a life of shackled ignominy beneath the Imperial heel, too lowly even to be harvested for servitor-spares lest he sully the holy-machines to which he was bound, until the coming of Chaos saw him freed? Did he recognise the secret masters of his heart as unnameable things ran wild through the temple avenues beneath which he toiled? Did he kill the guardsman that once wore this uniform, pulling him apart with claw and tooth and rage, garbing himself in discarded flack armour and taking up his fallen grenade launcher that he might serve the Lords of the Abyss? 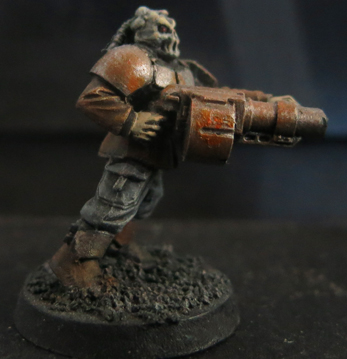 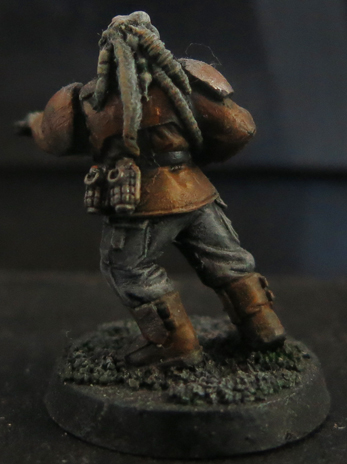 The Evil That Men Do

Right, after that brief dalliance with the uncaring Throne-World let’s get back to more important matters – the rise of a horde of ragged traitors. I know I’ve said it before but I’m really getting a lot out of my current traitor guard project. It’s something I’ve wanted to work on for a long time so it’s exciting to have the chance to finally get to grips with it. What’s more the models themselves respond well to simple conversions with the result that one can quickly create a warband that is both cohesive and chaotic. 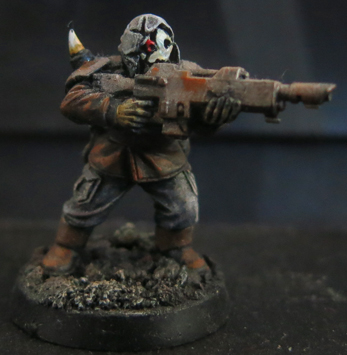 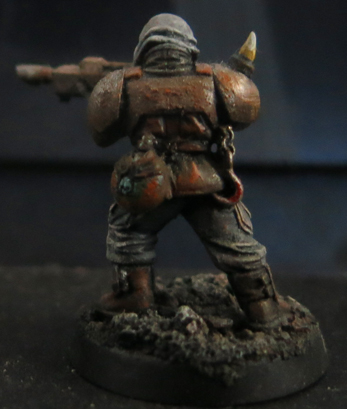 Just in case any of you are thinking ‘this is a con – he showed us that model the other week!’ I can assure you it’s not true, they just happen to look similar (and here’s the proof). Perhaps they’re brothers?

Of course even oath-breaking scum and the dregs of the galaxy know that life is better with a friend, so here’s another one to keep him company.

As usual feedback is welcome!

These men were loyal once. They fought, suffered and died in the Emperor’s name. Yet in the end their faithfulness bought them nothing. Their calls for reinforcements went unheard and they became a battered, broken force. Many were badly injured, all were badly painted. Some were missing arms, weapons, even heads. When high command finally recognised their plight their relief was short-lived. They were packaged up and, to their humiliation, sold on ebay.

Honestly, it’s enough to make anyone turn to chaos…

Continuing my efforts to build up a nice horde of tech-barbarian scum and disenchanted former-Imperials here’s a couple more additions to the new squad. I find the chap above to have a particularly creepy ‘killer clown’ face but the man-in-in-the-iron-mask (below) isn’t going to be winning any glamour contests either.

The heads, incidentally, are from Pig Iron Productions (scary clown man) and Puppets War (equally scary metal mask). Loyal citizens of the Imperium will be sorry to hear there’s still plenty more to come but if the rest of you heretics have anything you’d like to chip in you know your thoughts are always welcome.

Revolution Is My Name

The aim in mind for my traitor guard is to build up a real horde of heretics; a swarm of thugs, chaos fanatics and other degenerate scum. In terms of the vibe I’m looking for think of the Skaven from Warhammer; massed ranks of shabby, poorly armed foot soldiers, accompanied by weird specialists and crazy warmachines.
Obviously the task of actually recruiting all those bodies represents a bit of a logistical headache – the very principle is that there needs to be a lot of them. In order to solve this I’ve had a root around on ebay and managed to pick up a load of Cadians and Catachans on the cheap. These models, unwanted in their previous incarnation, will now be converted into the next wave of the Chaos advance.
Philosophically I think this gives something to the spirit of the models themselves; the character of former Imperial soldiers who have turned to the worship of Chaos being represented by formerly Imperial models.
Anyway, here goes with traitor guard squad number two – Clan Maul. First up we have this chap with a flame-thrower, another survivor of the Special Weapons squad I planned long ago (back when I was basing the collection around the Imperial Guard codex rather than the Lost and the Damned list from Forgeworld). 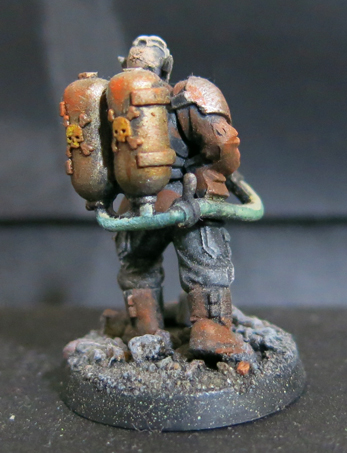 And here’s the first of his new squadmates, another devilish looking traitor. 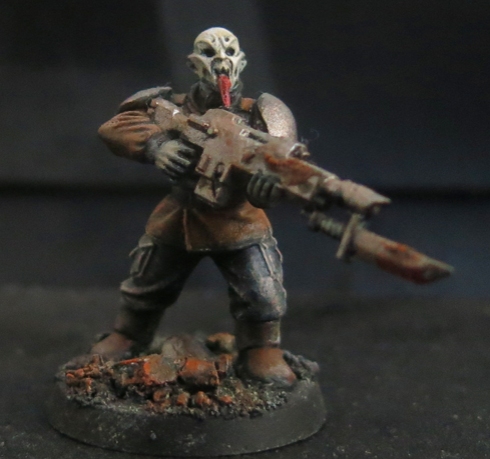 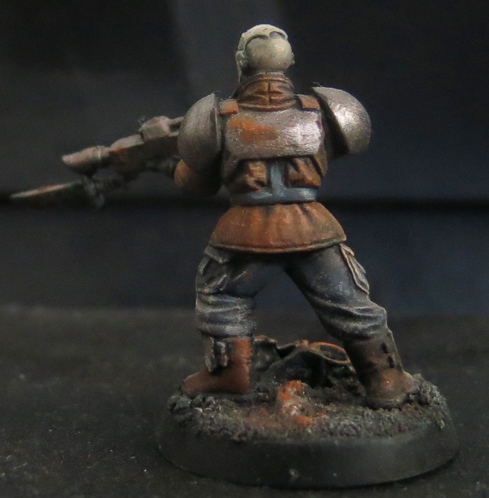 Hope you like them, there’s more to come soon and, as usual, if you have any feedback I’d be happy to hear from you in the comment’s box below.

Dangers of the Faithless

Right, back to traitor guard and, with the addition of these two fearsome looking gentlemen, Clan Claw, the first squad of my rebellious horde, is complete. First off here’s another scary man in a mask. 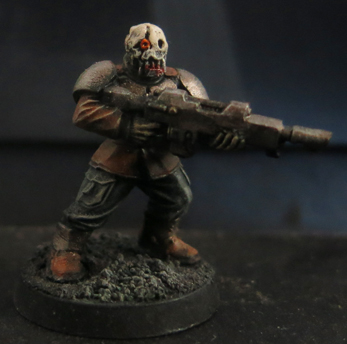 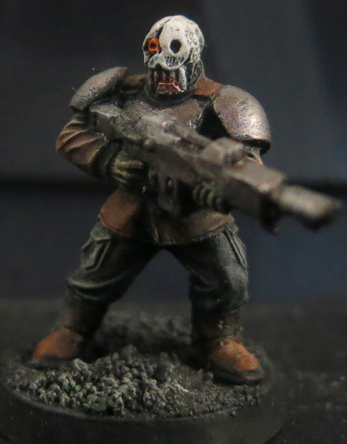 Of course, no squad of deviant traitors would be complete without a twisted champion to lead them. 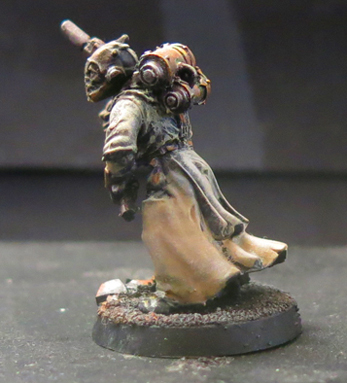 And here’s the whole happy family together. I have to admit I’m really loving my traitor guard, they’re great fun to convert and relatively quick and easy to paint so if you’re thinking of taking the plunge and starting your own evil tech-barbarians I’d highly recommend it.

Hammer of the Gods – Part 2

Just a quick update, as promised, here’s the Bone ‘ead for my renegade Ogren squad. And yes, I know there’s no Bone ‘eads in Imperial Armour 13, I just don’t like leaving my Ogrens without someone in charge! 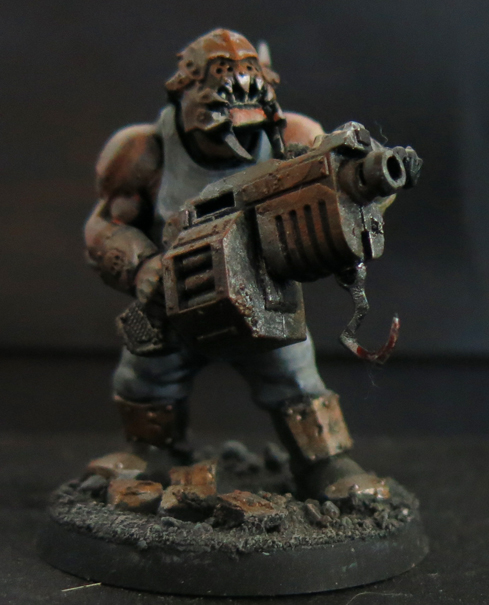 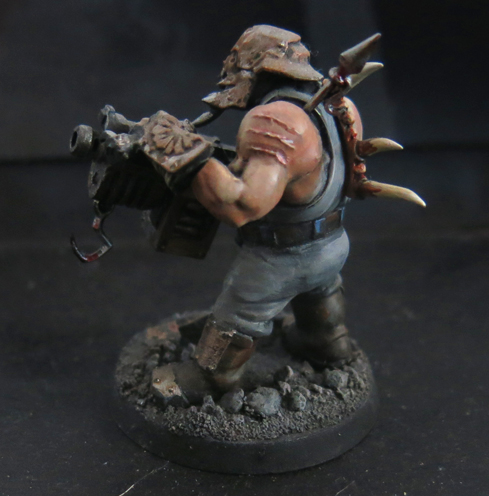 As you can see, he’s considerably bigger than the others. Never mind eh – at least he looks like the boss!

Hammer of the Gods – Part 1

Perhaps this miniature should serve as a reminder that, although I’m a big fan of the ‘paint what you want, work at your own pace’ approach, sometimes it wouldn’t hurt to get my bum in gear a little. I started work on this model a long, long time ago – back when the Beasts of Ruin consisted only of a handful of Terminators and Chaos Marines. I fancied a few Chaos ogrens to lumber alongside and started working on a test model made from a combination of ork nob and ogre parts. Over the years he’s mutated regularly until he ended up in his current incarnation. 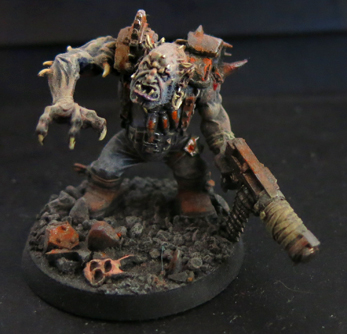 The thing is though, it took me so long to get him painted up that Games Workshop went and released new plastic Ogrens in the meantime (something that in itself seems a long time ago now). I did wonder about packing it in with this model and relegating him to bitzbox purgatory, but a combination of fondness and stubbornness stayed my hand and I resolved to finish him. 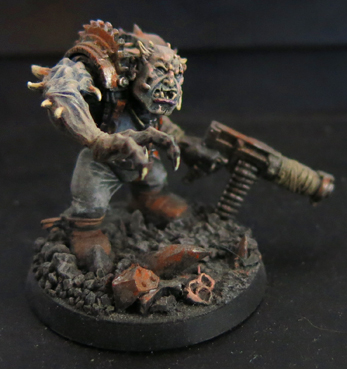 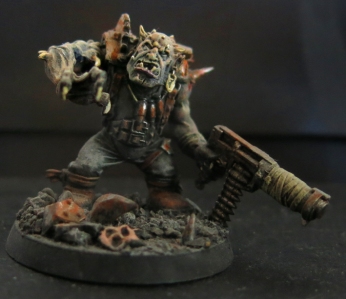 He’s a little small compared to the new plastic Ogrens, and I’m already working on at least a couple of models based on that kit, so I worried that he would look a bit like the underfed brother next to the others. The best solution, I reckoned, would be to make another so they could be short together. Life’s always better with a friend, even if you’re a thuggish mutant enslaved by the ruinous powers! 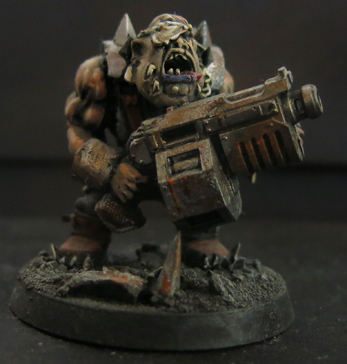 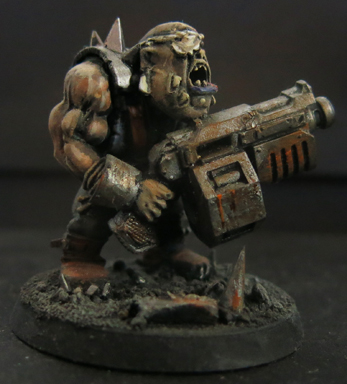 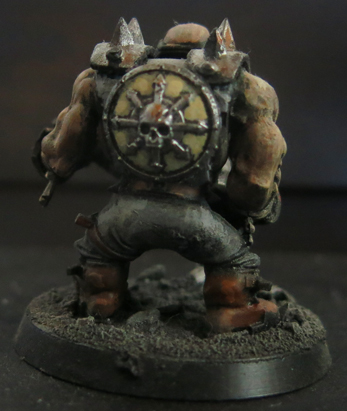 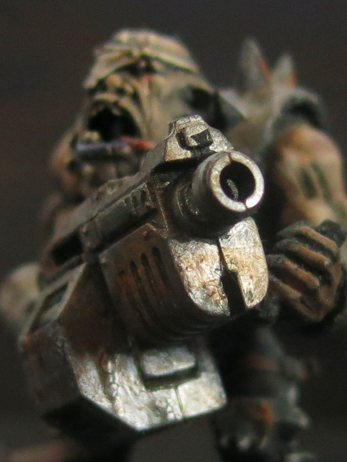 And here’s the two of them together. I’m making a Bone ‘ead to keep an eye on them and make sure they keep going in roughly the right direction, but he’s not quite finished yet. Soon, I promise!

I started work on them long before Forge World released Imperial Armour 13 with its updated Renegades and Heretics army list so I was particularly interested to see how ogrens had been handled in the new book. Where previously we had a whole variety of units (Ogren Berserkers, Plague Ogrens, the Hounds of Xaphan) now we just have Ogren Brutes, which can then be upgraded by adding packmasters with chaos hounds (reckon I’ll do something with that soon) and/or dedicating the squad to one of the gods. This means that as well as ogrens dedicated to Khorne and Nurgle we can also see ogrens dedicated to Tzeentch or Slaanesh both of which strike me as interesting propositions from both a fiction and a modelling perspective. Khorne seems a natural choice for an ogren (Khorne approves of hitting things, ogrens like hitting things, it’s a match made in heaven really) and with their poor hygiene and resilience to disease they fit in nicely with the followers of Nurgle as well. Slaanesh is harder to conjure though – I’m struggling to imagine an ogren enjoying decadent feasts or the height of sexual perversity. Likewise an ogren that plans to master the power of the warp and become a master magi is setting himself up for a disappointment. However I reminded myself that ogrens tend to go where they’re led regardless of their affiliation and could easily find themselves bound to a Slaaneshi or Tzeentchian master (the latter enjoying the protection of some serious muscle whilst he channels the warp – the former… well, perhaps it’s best not to ask).

Anyway, I already have plans for some Khorne and Nurgle ogrens but perhaps a few more dedicated to the other gods wouldn’t go amiss… I’m thinking the Skaven Stormfiends might contain the makings of a Slaaneshi ogren, and perhaps there’s something Tzeetchian in the Morghasts? Any thoughts?