Rarely is the question asked “How many Orks can Wudugast paint in a month?”. In part this is because I usually forget that Orktober is a thing and months, then years go by with my lovely greenskins gathering dust. This year however I’ve actually remembered about this annual celebration of all things Orky and am determined to use the time as a spur towards making inroads to my backlog of greenskins. It’s been a fantastic year for fans of the Orks/Orcs, with new Kruelboyz appearing in Age of Sigmar and a mighty host of warlike ladz stomping around on the 40k side of the fence, and as a result my already significant heap of unpainted Orks (and Orcs) has only grown.

Now as it happens a couple of the Orks I’d like to tackle this month come with little grotty, gobliny gretchin as sidekicks and we wouldn’t want them messin’ about, getting underfoot when we’re supposed to be concentrating on proppa boys now would we? Best to get them out of the way whilst we were still in September so we can spend next month laying about as many Orks as my paintbrush will reach. Readers familiar with the Ork range will recognise these two diminutive little gits and by extension guess which Orks I’m hoping to paint up – the rest of you will just have to wait and see. 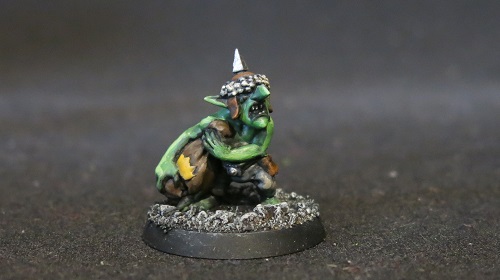 Then we have Makari, arguably the most famous gretchin in the 40st Millennium (with the possible exception only of the Red Gobbo). Makari vanished for a number of years there, having allegedly been sat upon by his boss, but he’s back now with a new miniature and he’s as mean and stabby as ever. For those who’re wondering, the glyphs on his banner read “Boss” “Waaagh” (War) and “Goffs” (one of the Ork tribes). So that’s the Warboss of the Goffs then – I wonder who that could be..? 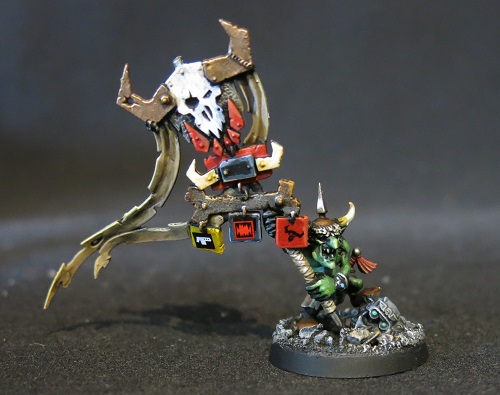 Right, now with those two little gits out of the way let’s get ready for a whole load of Orks! Waaagh!