Say this for the Lumineth Realm-lords, they take croquet really, really seriously! Whilst the other miniatures I’ve tackled recently have been waiting for attention for a while this chap is a newcomer to the painting desk, going from purchased to assembled to completed in a few short steps. The Lumineth Realm-lords range seems to have met with mixed reviews, like marmite some people seem to love them, others to hate them. Unlike marmite I can abide them in my presence – in fact I must admit that although I won’t be rushing out to start another army I actually rather like them. These particular models – the Alarith Stoneguard – have come in for a particular panning from some quarters but I think they’re great, although I’m less than enamoured by the price of them. Anyway, I managed to get my hands on one to test out a colour scheme and I’m happy with the results. I based it on the variant colour scheme for the Great Nation of Ymetrica, showcased in a tutorial on the Warhammer TV Youtube channel, but made a few variations because – despite the fact that I own about a million pots of GW blue paints in various colours  – I still don’t have most of the ones used in the tutorial.

I’ve had a scrounge around online and managed to acquire a few Lumineth, without paying full whack for entire sets of them, so a little warband is probably in my future at some stage.

Until now I’ve never painted a high elf. It’s not something I’m famous for per se, people don’t point me out in the street, nudging their friends and saying “there goes the man who’s never painted a high elf” but it is something I spoken about in the past, usually in connection with my typically dirty, grimy painting style. War is a famously filthy business, with lots of tramping through mud and dust interspersed with occasionally being splattered with blood and other fluids and I tend to reflect that in my miniatures. I enjoy seeing armies that are beautifully painted in parade-ground uniforms but for me it’s not done until it’s dirty. Thus the high elves, which are famed for being clean and bright have often been used as an example of something I don’t or wouldn’t paint.

On the other hand I don’t tend to see not having done something as a mark of pride. You meet people, for example, who will boast about the films or TV shows they haven’t seen, books they haven’t read, and so on, and I must admit I find that rather odd. Trying something and not enjoying it is fair enough, or not getting around to seeing or doing something because there’s only so much time in the day. It’s not doing something and treating this as a great achievement and a mark of specialness that I find odd. I haven’t found it to be a constant daily battle to restrain my unhealthy compulsion to paint high elves and as a result I don’t feel I deserve to be congratulated for it.

Anyway, enough waffle, the point I’m driving at (rather laboriously!) is that I’ve painted one now – here’s a Swordmaster of Hoeth for your enjoyment. 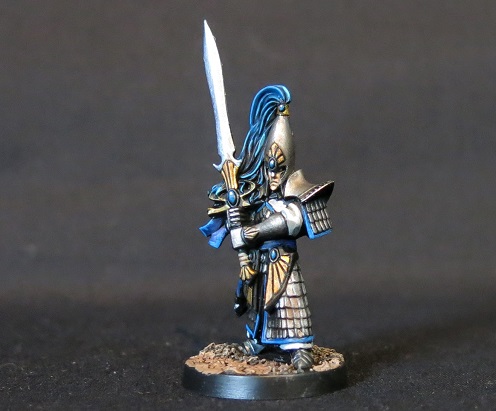 I’m quite pleased with the blue-tinge on the sword (just a straightforward coat of Grey Knights Steel with a highlight) but it really doesn’t show up well in the picture from the front. You can see it a bit better in the shot from behind though.

This isn’t the start of a new project, I just realised it was something I’d often said that I’d never done and decided that now was as good a time as any other to change that. That said I do have a few more, which I got as part of the Island Of Blood boxset that accompanied the release of WHFB 8th Edition (which I bought for all the lovely Skaven of course) so who knows, if people start nudging each other in the street and saying “there goes the man who’s only ever painted one High Elf” I might just be forced to break out some more…

The Times They Are a-Changin’

Of all the chaos gods Tzeentch has always been the one who’s image is hardest to define. Slaanesh is lithe and unnatural, a punk-rock dominatrix who’ll leave soul begging for more. Nurgle is a jolly fat man, slow and generous and ripe with disease. Khorne is a beast-faced bullet, a roaring, stamping wall of bullish muscle waving a chainaxe at the world. All relatively easy to sculpt and paint – whether in violent pastels, putrid greens or bloody reds. Tzeentch is change, mutation and illusion and his colour is the colour of magic. The studio models may be painted in blue and purple shades but that’s only because Games Workshop have yet to find a way to add glittering octarine to their paint range.

In the past official efforts to capture the essence of this ever challenging god have been distinctly hit and miss. Indeed there have been a couple of fan projects recently which have more than equalled the studio’s output. Just take a look at these by Big Boss Redskulls, or these, by Nordic, showcased at the Convertorum. This weekend however the boys at Games Workshop have taken another crack at it, porting their success with boxed games in 40k over to Age of Sigmar and resurrecting Warhammer Quest into the bargain.

A few months ago I commented on this blog “Tzeentch’s followers are now fairly well represented. I might have preferred something a little more ‘Lovecraftian crawling horror’ and less ‘cartoon character’ but that’s a matter of personal taste. Now it would be nice to see some more emphasis on the god’s mortal followers; mad sorcerers, mutants, beastmen and of course the Thousand Sons themselves”. I promise that, at the time, I had no idea that this might be coming – being as I am extremely sceptical of the “rumour’s scene” that surrounds Games Workshop’s output in a haze of wild theories, wishlisting and general tin-foil-hat-ery.

I went on to say “Of all the gods Tzeentch is the chance for them to be the most creative, to come up with something visually arresting and unique”. Did they manage it? A quick look at this release reveals the answer to be a resounding yes.

A leaf through books like Realms of Chaos should be enough to remind anyone that there was a time when Games Workshop was much more adventurous than they’ve allowed themselves to be in recent years. Creatively they’ve become a little timid, preferring to explore already popular concepts rather than gamble with more outlandish ideas. Tzeentch knows however that change is inevitable. The creative team at Games Workshop have the power to be a creative force and it seems the fans are willing to follow them out of the power-armoured security blanket and into stranger realms. The Adeptus Mechanicus, the Wulven, the Genestealer Cults and now the Changer of Ways himself – all recent releases which have demonstrated that, for good or bad, Games Workshop are no long afraid to dig through the good ideas that had previously been thought resigned to the history books.

Take the beastmen for example. Once upon a time concepts like this rendered them as true children of Chaos, the first offspring of the gods, an eclectic mix of creatures that over the years became safer and less complex, until we ended up with the goatmen of today. Personally I love the modern goats – as evidenced by my 40k Bloodgors – but I’d never deny that something is lacking; and that something is Chaos. Thus the Tzaangors are in many ways the most exiting bit of this release for me, representing as they do the return of the god-specific beastmen of old. Those wishing to keep their Thousand Son’s armies in line with the fiction can now add the native beastmen from the Planet of the Sorcerers to their ranks, and mix in some Kairic Acolytes for some really impressive cultists. 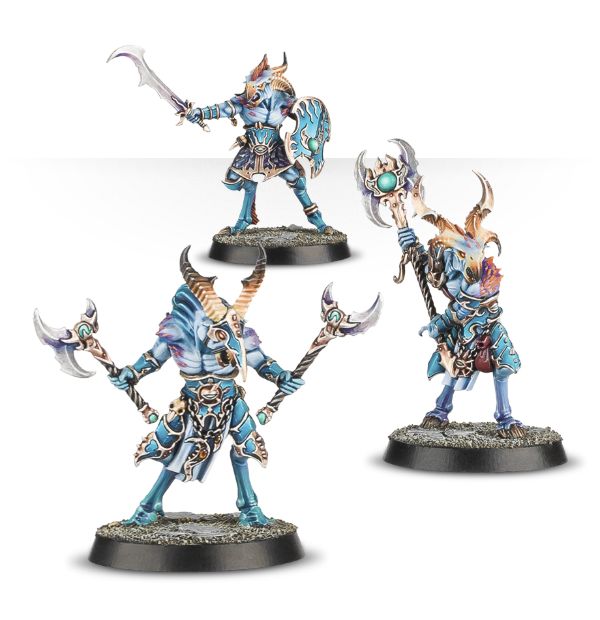 In this release a good creative balance also appears to have been struck – between the shapeless horror that Tzeentch represents and the almost comical or cartoon-like vibe which grants this god’s followers a particular element of unreality. When pulled together correctly, as in this image from the 1980’s, this creates a particularly malevolent horror which must resonate particularly with anyone who’s afraid of clowns.

Sadly the modern horrors have emphasized only the cartoon-like elements, something the Silver Tower model does a little to address. Still with only one sculpt in the box it’s rather too little to make a significant difference. It would serve nicely as another alternative Herald of course – but Tzeentch isn’t really short on those. 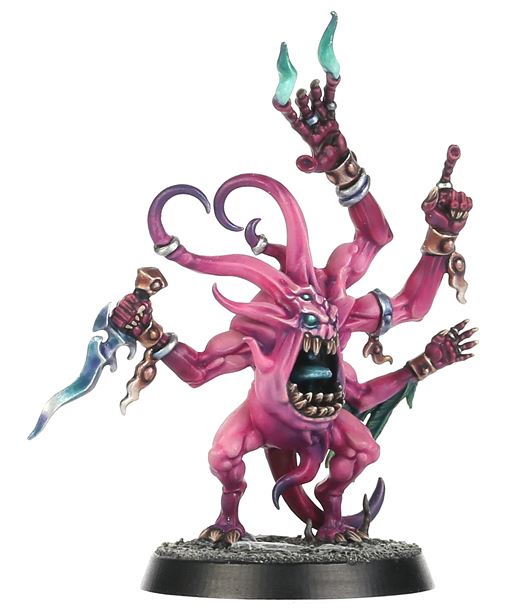 This release isn’t just about Tzeentch however. Games Workshop have also taken the chance to show us something of the direction they’re planning to take the Elves in. I’ve always fancied creating a collection based around a Wild Hunt, with the more feral elements of the Dark and Wood Elf ranges combined into a single ferocious force, riding out in the heart of winter to fall like a blizzard upon the weak civilised races. In my madder moments this turns into a force of Exodite Eldar instead. This release contains two wonderfully elemental elves – a mage and an assassin – both powerfully reminiscent of the much-missed Rackham. If these really are a sign of things to come then I look forward to my self control crumbling altogether as I launch myself head-first into another project.

If there’s a mistake with this release however it’s the lack of variety in the sculpts. Having pulled out a combination of creativity (the spider goblins are just the sort of mad genius that always brings a smile to my face) and high quality sculpting (the Skaven Deathrunners are particularly nice) they rather dropped the ball by repeating the same models, something which the already eye-watering price tag makes unacceptable. Still, so long as they keep pouring this level of creativity into the followers of Chaos then I’m inclined to be reasonably forgiving… so long as I can find a few bargains on ebay of course…