You crept into my bones that night in La Fenice, crept in and changed me forever. All these millennia you have slept whilst I have paced, restless and hungry – first in flesh and then in iron. Others wept and raged as their broken bodies were carried from the battlefields and beaten into unfeeling ironframes. I felt nothing. Since the day I fell free of your possession, since the tide of your control rolled back and left me, a puppet without a master, alone on the cold shore of freedom I have felt nothing! No acts of debauchery, no mutilation of flesh, not the braying of the great horns of battle or the slaughter of brothers and slaves alike has stirred in me the ecstasy you brought before you abandoned me at Terra’s walls. When the First Primarch fell and we fled from the golden walls of the False One’s palace you discarded me and left a hollow in my heart, a cold stone that has never healed or warmed since. What did it matter if I walked the stars as a man, or an ironform, or if I no longer walked at all; when all passion was denied me?

Only now do you creep back in, now that Terra is once more in our sight. What is ten thousand years, after all, to one such as you? Have you even felt the ages of my suffering? You exulted in our master’s glory whilst I was cast aside, spent and forgotten, one of Fulgrim’s chosen yet treated no better than a flesh thrall!

How I hate you! How I love you! Claim my soul! Warp my flesh! Let the horns of war scream out once more!

Well here we have it, my Dreadtober contribution finished at last (although we’re now almost a week into Cheatvember!) Lately I’ve been finding my enthusiasm for painting at a bit of a low, and I know this held me back considerably on this project, as well as draining my interest in all my other schemes as well. Particularly since visiting Warhammer World my imagination has been bursting with new ideas and crazy conversions but the desire to actually apply a paintbrush to any of them has been distinctly lacking. What’s more as the number of unpainted models continued to mount up I felt increasingly guilty about building more without painted the ones I’d already made. In some ways I hoped that Dreadtober would give me a push to actually get on with things, after all there was a deadline to be met and a lot of people who’d notice if I failed. As it turned out it did help but not until the very last moment.

The issue, I came to realise, was not dissimilar to that which felled the Emperor’s Children themselves – and so perhaps it’s fitting that it took a Slaaneshi dreadnaught to make me aware of it. By constantly trying to improve my skills, by striving to make every model better than the last, I’d drained a lot of the pleasure out of painting. Not every model needs to be a golden demon winner – indeed that’s not something I’d consciously aspire to. Art should be organic, both in its creation and its outcomes. In striving for perfection I’d made a rod for my own back. Instead I should have accepted that nothing I could create would ever be truly perfect and just had fun with it. Photography gives us crisp realism, paintings give us brushstrokes. The flaws in live music give it a quality, some might say a soul, that overproduced recordings cannot match. In an age of Hollywood blockbusters theatre has not died. Art needs to live. By setting goals which were unachievable I left myself unable to achieve anything. As a direct result of my determination to produce models which were always better than before I found myself producing things which I was less and less happy with. The more I tried to force myself to improve the more I wanted to take each model and throw it against the wall. Hardly the outcome one wants from a hobby which one intends to be relaxing. Time to change my outlook.

With this in mind I decided to let my hair down a little and just enjoy painting, and what a difference it made. Freed from my self imposed restrictions I took on my Dreadtober challenge with a new gusto. Ultimately we can’t all be Golden Demon winners and shouldn’t aspire to be. We are all craftspeople, all creating little pieces of art in our own style. Too much planning, too much fretting over details, and the process of creating becomes a chore.

For me painting miniatures should be more like sketching, taking an idea and giving it shape without worrying too much over the minutia. I’m not espousing laziness or sloppiness but I am saying that, for me, creativity is more important than perfection – which is why when I go to the Sea of Souls Tzeentch will claim me before Slaanesh does. Ironically the end result of this revelation is a model I’m particularly proud of, indeed – in my opinion – it’s one of the best things I’ve created in a while.

Anyway, enough waffle – you came here for pictures and you shall have them! 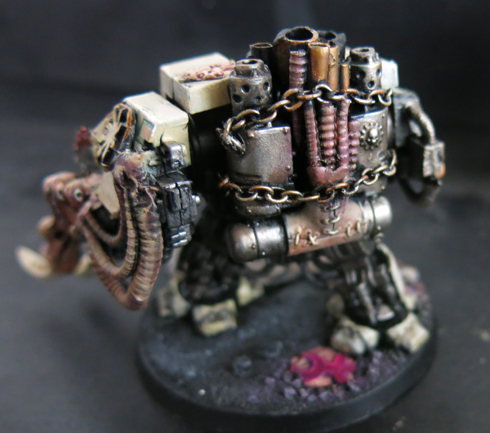 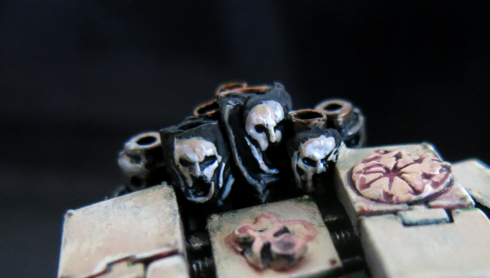 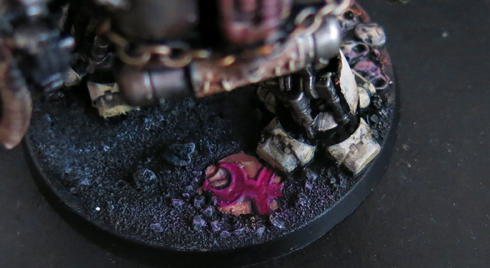 The knee-guard is finally re-attached.

All the faces that didn’t work out as I wanted them to for the Warp Amp found a home on the base. 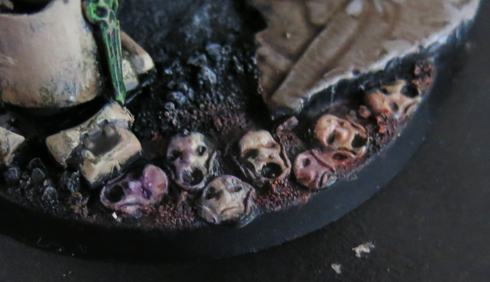 Finally here’s a group shot of all my current Slaaneshi models.

Once again I’d like to offer a huge “thank you” to Joe at Broken Paintbrush for making Dreadtober 2016 a success, and of course congratulations to all the other participants – whether they have a finished model to be proud of or just one that’s still half paint/half aspirations. As usual any comments or feedback are appreciated!

Well the end of Dreadtober is just around the corner and, as you can see, I’ve come close but I still haven’t quite made it. However the Dreadtober event will be running for one more week so those of us who’ve failed to achieve our target can enjoy a ‘cheat week’ and still join the ranks of our brothers to receive praise and accolades. Luckily Slaanesh enjoys praise above all else and has no problem with a little light cheating, Plus, at this stage, the longer I spend on him the better he looks – and the followers of Slaanesh know that if there’s one thing better than praise it’s looking good. 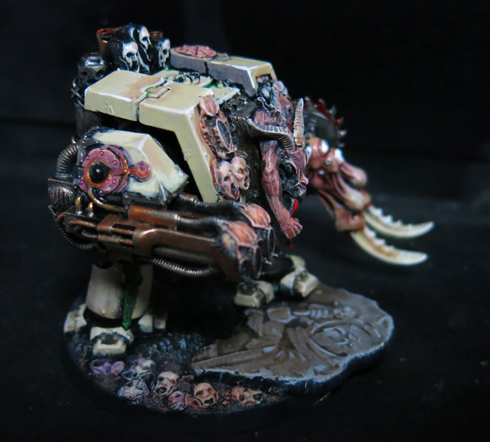 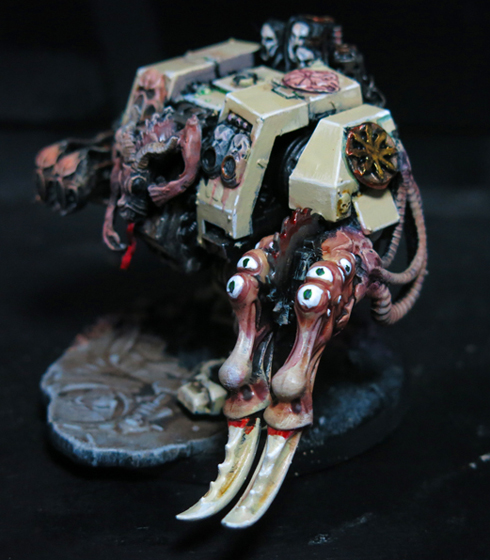 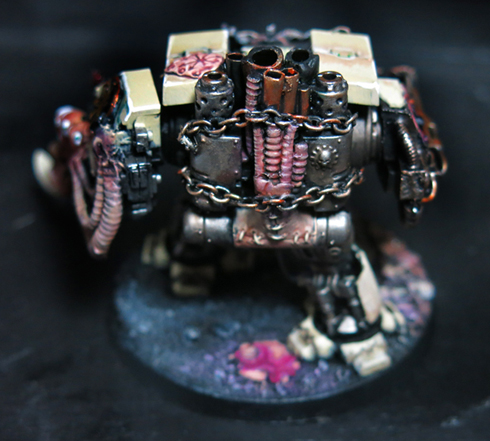 As usual feedback is always appreciated, and don’t forget to head over to the official dreadtober site at Broken Paintbrush where a showcase of everyone’s achievements will be appearing shortly.

Just a quick update on my DreadTober progress. What passes for daylight at this time of year is playing hell with the camera so I’m struggling to get any pictures that bring out the highlights properly (chalk that one up next to all the other excuses on this project!). As you can see there’s still a way to go with him (and now only a few days to go!) but he’s getting there at least. As usual comments and feedback are appreciated – and don’t forget to take a look at the official Dreadtober page to see what all the other participants are getting up to. 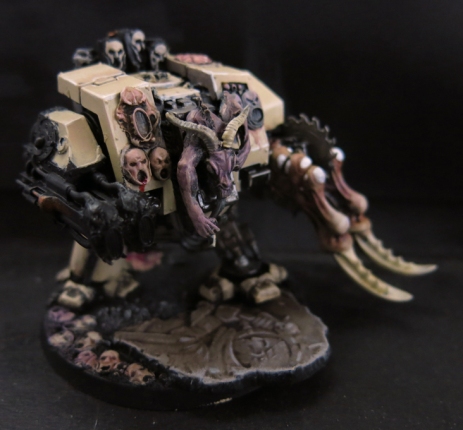 Oh – and pay no mind to that hideous looking green  and brass pipe work on the warp amp, that’ll be getting fixed ASAP!

Nobody said it would be pretty! Not at this stage anyway. The first layers of paint are down. Washes have been sloshed around. Brushstrokes are everywhere. Somewhere Duncan Rhodes is screaming. 10 days to go! 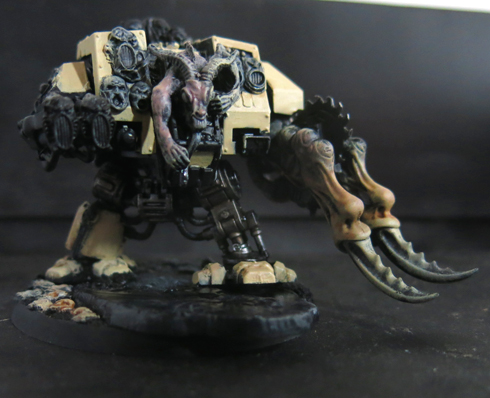 Two weeks into Dreadtober and the conversion of my Slaaneshi sonic dreadnaught is finally complete (barring odds and ends like the shin armour which will be kept separate for painting and added back in later). 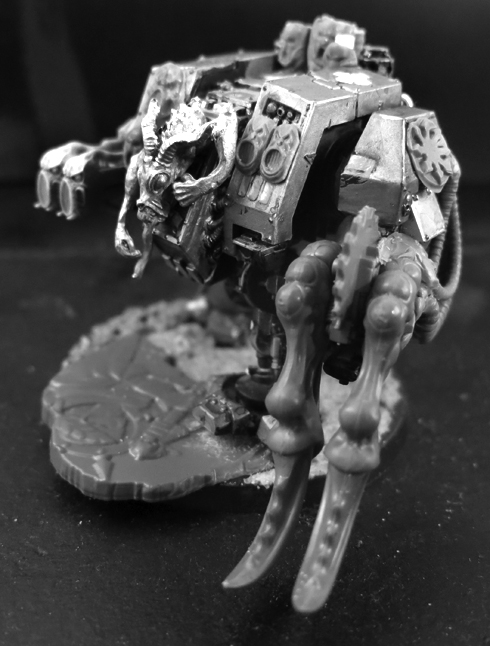 The claw-arm is now looking much better with the inclusion of some cables to anchor it to the rest of the model.

I’ve also finished off the warp-amp with a few chains to hold it in place (providing some visual consistency with the Nurgle helbrute I built last year).

With two weeks to go the first layers of paint will be going on soon but in the meantime your thoughts and feedback are very welcome.

Ah, the first Dreadtober update! I had such plans you know! Such things to show you! Alas my grand vision remains unfulfilled. Between work’s cruel yolk and the loving embrace of Grandpappy Nurgle, wrapping his arms around me, blessing me with his gifts and begging me not to leave him for Slaanesh, my progress has been slower than I might have wished.

Now that’s not to say I’ve got nothing to show you, it’s just that I planned to have the model completely assembled and ready for paint already and it’s simply not got there yet. Still, this is one of the most complex conversions I’ve ever attempted, an amalgam of plastic, plasticard, metal, resin and greenstuff so I shall be kind to myself and remind myself that getting this right is the most important thing, and that’s there’s still a lot of month to go.

Still – enough excuses! I have at least managed to get this monster to a stage where it can be tacked together enough that you can get a feel for how it’s going to look on completion, and get your feedback in. 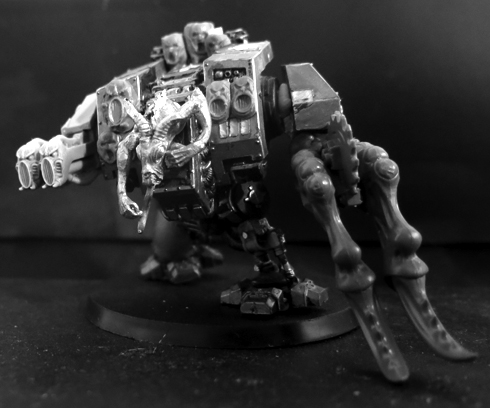 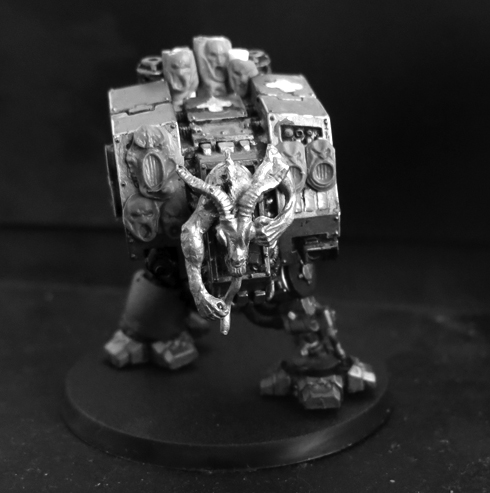 As you can see there’s still a bit of work to do before he’s ready for paint but progress is being made. The claw arm needs a lot of work before it’s ready to be attached properly and will most likely be raised a little, the tack isn’t strong enough to prevent it drooping under its own weight (insert your own Slaaneshi joke here). There’s also a bit more greenstuff work to do, the base needs done and both shin-guards are coming off so it’s easier to freehand/sculpt/whatever I decide to do with them. Here’s a close up of the arm which as I say still needs a lot of greenstuff before it’s ready to roll.

And here’s a look at the howling faces on the warp amp.

There’s also a few ideas which I originally planned for this dread but which are proving unsuitable in practice. Slowly they coalesce at the back of my brain, drawing in scraps of other ideas and generating fresh ones. After all once I’ve made a dreadnaught for Khorne, Nurgle and Slaanesh then poor old Tzeentch is going to be feeling a little left out…