I suspect that this next picture may illicit rather different reactions from viewers, depending on their age or immersion in Citadel’s history. Whilst oldsters may feel a warm glow of fond recollection newcomers will be more than entitled to raise an eyebrow. It’s a chaos renegade of Tzeentch, dating from the Realm of Chaos era (better known as the ’80s) but beyond that I’m still a little sketchy on its provenance. I remember seeing it many, many moons ago in White Dwarf but which issue now escapes me and in spite of digging back through old issues, and being sidelined by many an interesting article, I’m no clearer. Anyone with a better memory who wants to illuminate me please feel free. Thanks to a combination of my own (slightly fuzzy) memories, and the wisdom of Azazel and the crowd on Twitter, I know it’s a conversion, based on a chaos champion of the same era with pink horror arms. Beyond that however my knowledge is sketchy and I’m not certain who deserves credit for creating it.

Anyway, here it is as it appeared in White Dwarf all those years ago, alongside some equally cool looking models.

And here’s a better image shamelessly borrowed from the blog Realm of Chaos 80’s (which if, for some reason, isn’t on your reading list really ought to be). 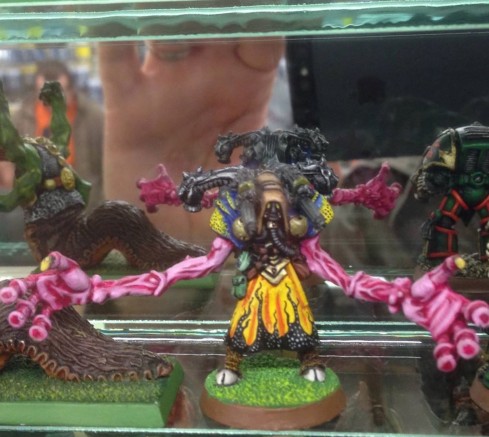 It’s certainly a unique miniature, so odd and wrong it shouldn’t work, yet somehow perfectly balanced and beautifully executed (at least to my eye). Regardless of its origins I’ve always had a real soft-spot for it and as I’ve been looking over my Tzeentchian gang again lately (which to my slight horror haven’t really been touched since last July) I realised that this would work perfectly as a champion. Time to take a stab at creating my own.

Consider the cables on his back as WIP for now, they’re going to need some improvements once the greenstuff is properly cured. 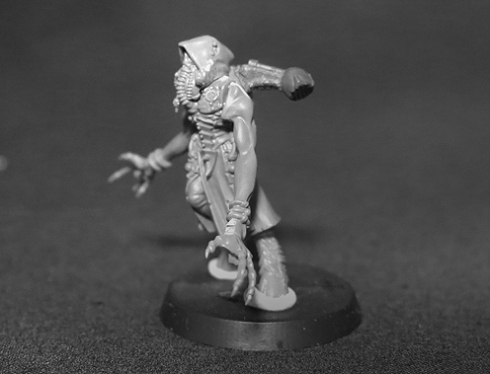 My aim was to create a model in the spirit of the original, duplicating as many parts as possible, but built from modern bits (finding Realm of Chaos era models now would be a quest in and of itself and then chopping them would feel like sacrilege to me).

Here he is hanging out with a modern Tzaangor.

And introducing himself to gang he’ll someday lead.

As usual if you’ve got any feedback, or if you know any more about the mysterious origins of the original, the floor is yours.

In the Mortal Realms and 41st Millennium alike the power of Tzeentch is waxing. Being, as I am, a degenerate worshipper of the Dark Gods, I’m easily distracted from my expressed goals (the Chapel and my shambling undead horde) and have rushed out to beseech the Changer from the comfort of the nearest unnatural flux-cairn. In return the Great Conspirator inspired me to manufacture another cultist through which to do his nefarious bidding. 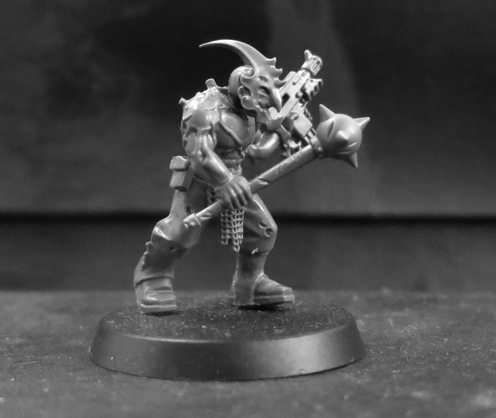 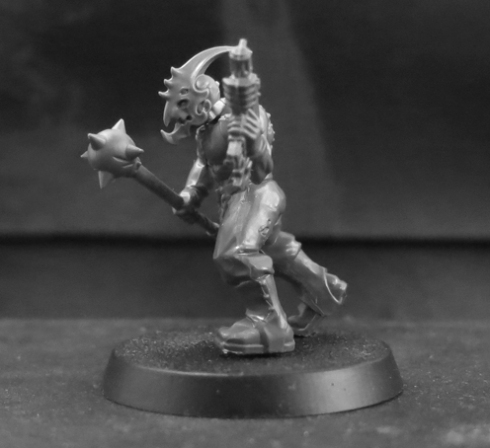 This kit bash is pretty old. It pre-dates the Kadetheron 13th (my traitor guard) by a considerable time, it may even pre-date the Beasts of Ruin altogether. Like the ogrens I showed recently it’s been through various incarnations and like them I wanted to use the opportunity of working on my traitor guard to finally get it finished. 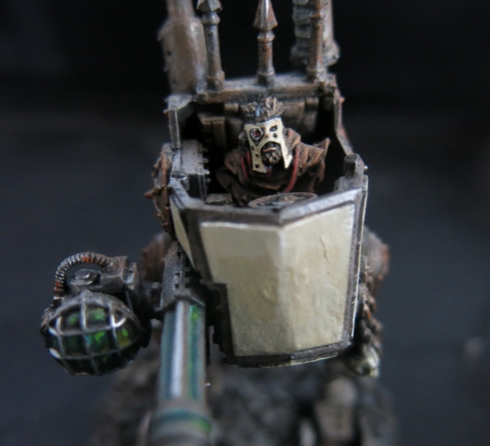 I’ve always thought sentinels were really nice miniatures, full of sci-fi character. Of course they don’t actually do anything that a genehanced scout or servitor-piloted drone couldn’t do better but every Imperial commander knows that sentinels have been part of their arsenal for ten thousand years and nothing is going to make them change now. And of course every follower of the ruinous powers knows that if the servants of the Corpse God have something they should steal it and stick spikes on it. 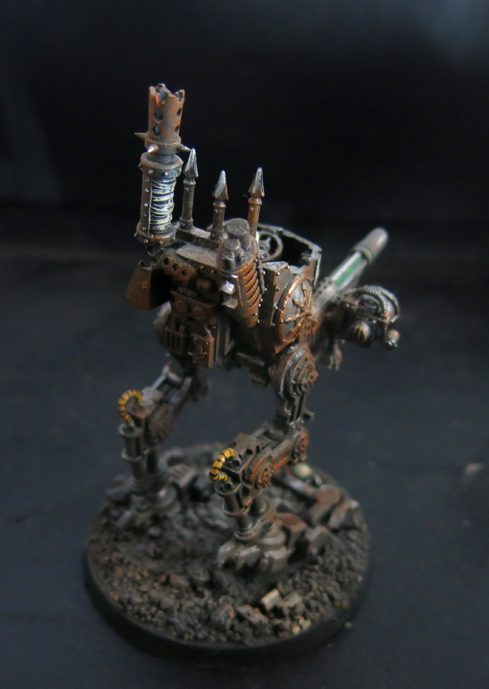 As promised in my last post, here’s my second Dark Apostle. He joins Aghkam Poxspeaker but serves as the more generalist voice of Chaos Undivided alongside his Nurgle worshipping brother.

Like a lot of the models that accompanied release of the last Chaos codex this one really impressed me at the time, which makes it slightly boggling that it’s taken me this long to get it painted. Then again I could say the same thing about several other models from that release (Warpsmith, Maulerfeind, etc). In the end I think I have three legitimate excuses; 1)he’s highly detailed, 2)I wanted to do a good job of him and 3)he proved to be a serious pain in the arse to put together. Anyway, he’s done at last!

Finally here’s a picture of him doing what he does best, preaching to the Converted. Oh yeah, I went there!

Fall to the Thrall

The second post I ever made on this blog, way back in November 2013, concerned the two squads of cultists I was working on at the time. It’s slightly worrying to me then that it’s only now that I’ve finally got both squads finished. Never mind, at least I did it, and met my personal goal of making each unique from the others as well. They’re split over two squads; one armed for close combat – the Cult of Nug, and on for ranged combat – the Cult of Yeb. Here’s Yeb himself. 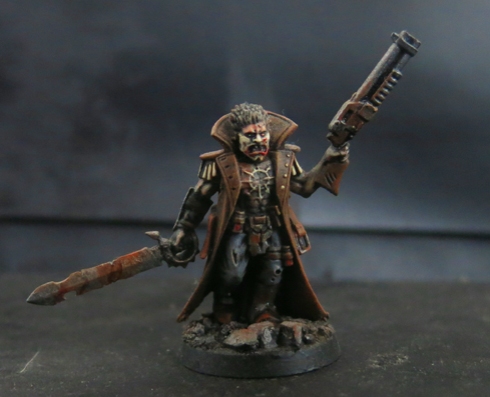 It’s been suggested to me that, with his Commissar’s coat that might be just what he is; a Commissar turned traitor. At first I thought this was a great idea but the more I considered it the less I was convinced. A Commissar must be utterly ruthless and unquestioning, a man without doubt or fear who’s resolve has only been strengthened by a lengthy training program and, undoubtedly, invasive indoctrination and brain-washing regimes. Such a man would not – indeed could not – simply turn to Chaos on a whim. Furthermore, if he did fall, the result would be a far more callous and terrible warrior than the mere leader of some rag-tag cultists.
Much more likely then that Yeb found his coat on the body of a dead Commissar, perhaps one who had stood, still firing heroically, as Kell and his terminators closed in. However this little train of thought did get me thinking about how interesting it would be to make a fully developed traitor Commissar, perhaps for the nascent traitor-guard army I keep considering. It would be interesting to look at how such a man could fall, and what would be created if he did. Watch this space!
Anyway, here’s the rest of the squad. 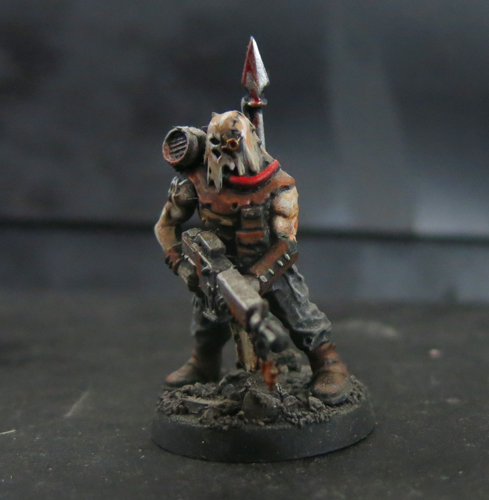 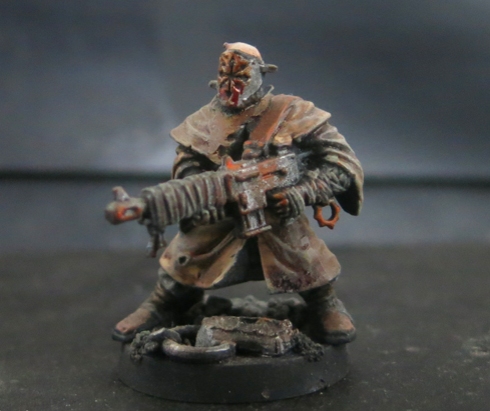 As I painted this next guy I started to realise that, with his deeply pitted eye-sockets, he was almost certainly blind. To me this puts a disturbing, and definitely Chaotic, twist on the model. I wonder what infraction led Imperial authorities to order this man’s eyes put out – or if he was born blind and shunned by the suspicious people with which he shared his hive? Either way the Dark Gods must have heard his whispered entreaties an granted him some alternative (I’m thinking infra-red – imagine him spotting approaching enemies by their body heat and gunning them down as they attempt to approach his holdout under cover of night or a dust storm. Ironically his sighted companions would be left firing blindly in the same direction – this is the sort of paradox that Tzeentch finds especially pleasing). Perhaps the process of transformation was so painful that he’s gagged himself to prevent him from, in desperation, asking the Gods for anything else.

And here’s a group-shot. Continuing the theme the next post should be the Dark Apostle that led them all down the twisted path into Chaos in the first place.

Practice What You Preach 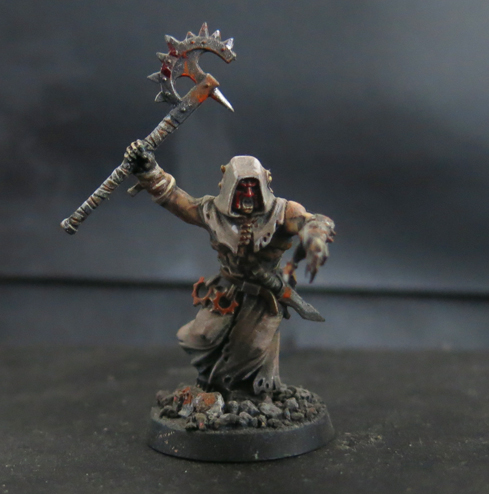 I’ve finished off some more cultists, bringing my close-combat armed squad up to fighting strength. 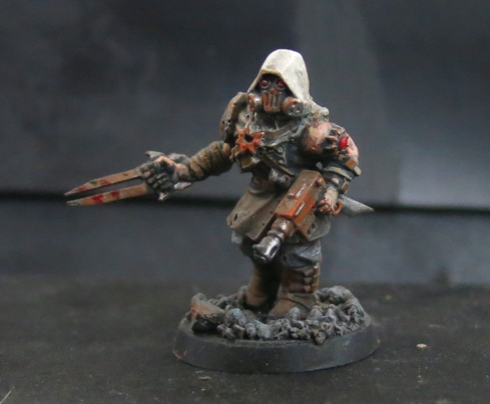 These two came out of the box matching, the one on the left has been substantially converted.

The Cult of Nug in full; overthrowing the Imperium one hab-block at a time!