The Lodge of the Flayed King – Part 2

I’ve been trying to work out a colour scheme for my Corpse Grinder Cultists and at last I think I’ve got something I’m happy with. Here’s initiate He Who Cuts modelling his new work wear. Before we look at the final piece here he is prior to being liberally splattered with gore. As you can see the paint job isn’t perfect but I didn’t see the point in breaking my neck over it if I was just going to cover it up with Blood For The Blood God technical paint!

And here he is suitably blood splattered after a hard day of unrelenting violence. 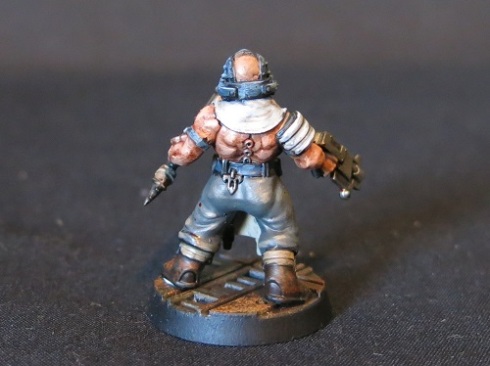 Overall I’m pleased with the way this colour scheme works on the initiates but I’m curious about how it’ll look on the more heavily armoured butchers, cutters and skinners so I’ll test it out on one of them next before rolling it out to the rest of the gang.

The Lodge of the Flayed King – Part 1

Very much in the spirit of the Goliath WIPsI posted last week here’s a look at some more unpainted Necromundan plastic, this time in the form of my favourite underhive cannibals the Corpse Grinder Cultists.

First up I turned my attention to the cult’s initiates (that’s Juves in any other gang). I’ve already built a couple of these, pretty much exactly by the book, so now I wanted to go off-piste a little and see what I could come up with. Particularly I wanted to explore some of the weapon options available to the gang which aren’t available on the “stock” models – that is to say weapons which are described in the rules but aren’t available as part of the standard plastic kit. Unlike the majority of the gang, which can only be equipped with close-combat weapons the initiates have not fallen so far into Khorne’s favour that they’re reduced to running screaming across the battlefield with no heed for the niceties of tactics. Indeed these newcomers to the gang, still digesting their first few meals of still-warm person, can chose from a selection of ranged weapons – and even remember that they can be fired from a distance rather than just used to bludgeon the nearest foe. As well as the likes of stub guns and autopistols a particularly attractive sounding option is the harpoon launcher. For one thing it makes me think of the Ursus Claws, the massive harpoons used by those ultimate Khornate warriors the World Eaters. For those not in the know the Ursus Claws are basically huge harpoons that were mounted on the titans of the World Eater’s allies – the Legio Audax – and, if even that isn’t big and over-the-top enough for you, on their flagship The Conqueror. If titans impaling other titans and dragging helpless tanks around wasn’t cool enough imagine if you will a massive spaceship harpooning other spaceships so that they can be rammed and boarded by thousands of Khorne berserkers. The World Eaters do nothing by halves (and really ought to have a range of miniatures – just saying, GW, just saying…). Anyway, I reckoned a smaller version might be just the thing for the Corpse Grinders to have in their armoury, partly for the nod to their larger Khornate cousins and partly because I like the idea of the initiates retaining the common sense and forward planning to impale some poor sod and take them home for supper whilst the more corrupted members of the gang are busy hacking people up today with no thought for tomorrow.

Making the harpoon launcher was pretty straightforward, it’s lifted straight from the Orlocks kit, with a trophy skull popped on top to add that Khornate vibe. It fitted pretty well although there was a slight gap left (which would normally be covered by the Orlock shoulderpad) but a suitably spiky jawbone soon covered that up. The other shoulder needs a little greenstuff to tidy it up but otherwise he’s good to go.

The other trick up the sleeve of the initiates, as well as their ability to use ranged weapons, is being a lot sneakier than the rest of the gang. Whilst their lodge brothers let everyone within a hundred miles know that they’re on their way by revving chainblades and running screaming at their nearest victim, the initiates tiptoe through the underhive ready to spring on some hapless meal that just happens to be walking by. In game terms this means they have the Infiltrate skill which allows them to pop up uncomfortably close to the enemy and start making mayhem. The Corpse Grinders have a reputation for being quite a nasty, over-powered gang to face and although I’m quite sure this isn’t something that will last forever as new models are released and new tricks discovered, I’d also like to emphasise that I’m not trying to create a gang with which to smash all comers and win at all costs; that isn’t something that appeals to me at all and it certainly doesn’t fit with the spirit of Necromunda. Mainly I’m interesting in modelling opportunities but I also like the idea of interesting tactical tricks for as and when I do get the occasional game in, and having a juvenile delinquent with a rocksaw pop up practically on the toes of the enemy gang sounded like a chance for the kind of mayhem that Khorne would undoubtedly approve of. Again he’s mostly based around the standard initiate model, this time with the arms and weapon from the new Goliath prospects. 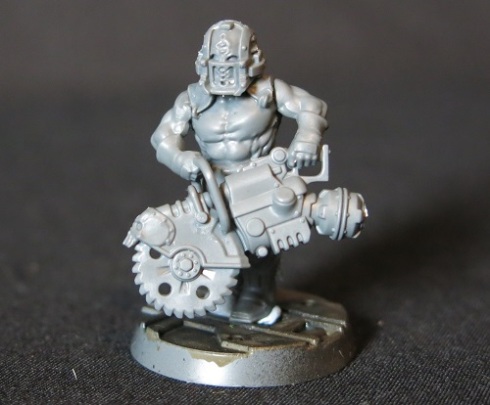 Lastly the gang needed a leader and as ever I wanted someone who looked uniquely mine (so heavily kitbashed and converted from the studio version) and suitably imposing, someone who could look across the table at any of my other converted leader models and have them know that they meant business. Much as I love the studio versions of the Corpse Grinder Cult there’s nothing to really make the leader stand out from his barbaric followers. I began by building the model as per the studio instructions but added on every extra spiky, skull-covered extra I could find, rather than diluting the effect by spreading them around the whole gang. Then it was just a case of finding a suitable head and this mask, borrowed from the trophy rack of an AoS Orc (sorry – Orruk!) fit the bill nicely. 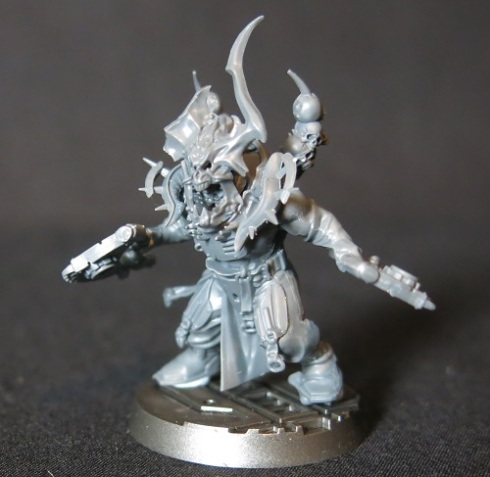 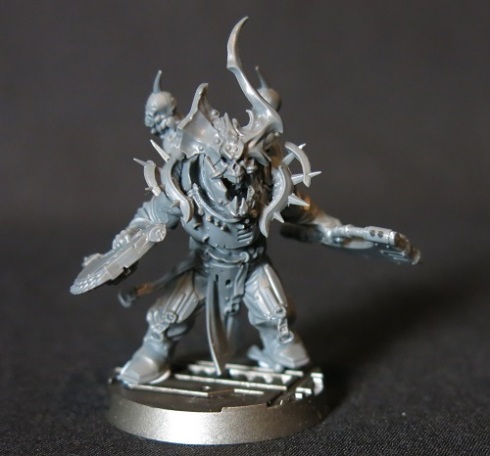 With these three done, plus the other cultists I’d put together previously, I’m well on the way to getting a starting gang built. Now I just need to pick a colour scheme – something that shows the blood will do nicely!