I’ve had a pack of angry, Khorne-worshipping berserkers sitting on my desk for a while now, just waiting for a little love and a coat of paint to come their way. Frankly I’m getting a little sick of the sight of them, so I’ve decided to get them all painted up if it kills me (which – if the rest are as much of a slog as this one was – they just might). 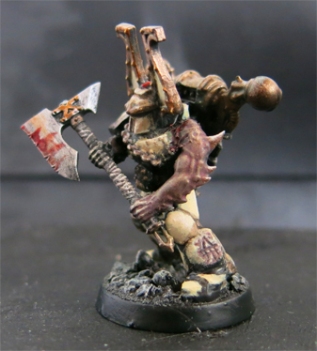 Comments for the comments box, slaughter-mates? (And feedback for his throne of course…)

Khorne With The Wind

So the Age of Sigmar rumbles on and, following on from the release of the God-Kings golden warriors – which proved a little bland to my taste after a while, we now see the opposition; the legions of the Blood God. Because I thought this merited talking about a little I decided to chap on and get a model painted so I’d have something of my own to show off as well.

Of course as my own worship of the Dark Gods is rooted firmly in the 41st Millennium this berserker wears power armour instead of leather and iron plate.

I turned his bolt pistol into a net launcher as I reckon this would be a pretty handy weapon for a berserker to have. Khorne, after all, isn’t the type to deliberately handicap his warriors with too many rules. Perfection and precision is more Slaanesh’s department, Khorne – as we are reminded ad nauseam – cares only that the blood flows. Thus although snaring your opponent in a net is not the most honourable way to go about things if it helps you lay bigger and more impressive skulls at the foot of his throne then so be it. He also has a fairly low opinion of enemies who run away so the ability to snare some panicking troops and drag them into reach is likely to be interpreted approvingly. It also adds a little gladiatorial element which plays to one of Khorne’s key themes nicely.

Yesterday we also saw the arrival of the Exalted Deathbringer and what a beast of a model it is. This is one of those models I loved from the moment I saw it and will undoubtedly pick up at some point (remind me of that in three years when it’s never put in an appearance here!).

Many commenters have said he’d make a fine Abaddon proxy but I have to say I don’t see it myself. The topknot and the talon are the only aspects which distinctly convey the character of the master of the Black Legion and whilst the former certainly works the latter is a little small to be the legendary Talon of Horus. That’s not to do it down – it certainly looks brutal enough as weapons go, but unless Horus tickled Sanguinius to death this isn’t what he used. Now that axe is another matter. If I was planning to use this model ‘as is’ in Warhammer or Age of Sigmar I’d be spitting bile right now. I know many miniatures companies – GW being one of several culprits – get a bit carried away when it comes to the weapons they arm their models with but this one is particularly silly. How’s he meant to lift that bad boy without putting his back out? And even a warrior of Khorne should consider that he’s hung his skulls in a particularly inconvenient place.

What if, however, we imagine the model as a basis for a Kharn conversion instead? Suddenly he makes more sense. The lower body is already distinctly similar to that of the Betrayer, the symbols of Khorne are already in place and the armour – or lack of it – is far more closely reminiscent of a berserker’s power armour than terminator armour. Best of all, that axe finally looks right. It may be ridiculously outsized for any normal human, or even a Space Marine, but it looks about right for a Primarch (for those not in the know Kharn’s axe Gorechild once belonged to his gene-father Angron). And let’s be honest here, Kharn would be mad enough to lug his father’s axe around even if it was that preposterously large (and tough enough to keep on reaping skulls with it).

On a more general note the toplessness of some of the new models is starting to make my life in the 41st Millennium tricky. Nurgle’s followers can bloat and burst through their armour and hardcases like Kharn can rock up to void-combat shirtless but if I want to take advantage of the Blood Reavers then soon half my army will be doing it, which may somewhat dilute the effect. Of course this may just be a sign of a Space Marine-centric world view – after all no-one’s ever bothered that the Catachans forgot to get dressed.

Anyway, as usual I’d be glad to hear your comments, both on my own Berserker and the new Deathbringer. Do you hate him? Have any crazy conversion ideas of your own? Planning to use him in old-school Warhammer – and if so as what? Speak your mind in the comments box below.

Since I wrote this post I’ve been working away on two more Khorne Berserkers to join The Bloodbeasts.

I gave this first Berserker a traditional pose, launching himself forwards into battle. The bare arms, which I used for both miniatures, helped to emphasis both a gladiatorial heritage and the ferocious nature of this warrior. He relies on his strength and rage rather than any clever flourishes. The spiked club really drives this home, he won’t be parrying like a fencer or floating like a butterfly but once that weapon has smacked into your skull a couple of times that won’t really matter.

For the second I wanted a more restrained stance. Khorne’s followers are brought down as much by ego as by bloodlust or savagery, belief in their own prowess in battle blinding them to their decent into fanatical rage. I admit I tend to struggle with the image of Khorne’s followers as “always angry, all the time”. I can imagine their fury overwhelming them in the heat of battle, and suffering from a twitchy addiction to killing at other times, but even they remain, at core, men not daemons. As men they need to eat and sleep (albeit dreaming bloody dreams), as well as preparing to do more violence in Khorne’s name. The Red Butchers are described as being immobilised within their terminator armour between battles (and chained up for good measure) but reason dictates that if all Khorne’s warriors required the same measures to control them his cult would have flared briefly, then burned itself out in a flurry of violence. Without some recourse to rational thought and some degree of forward planning the World Eaters and their various offshoots and imitators would have gone extinct millennia ago, hacking themselves apart for want of adversaries or simply dying of exhaustion, used up husks abandoned by the Blood God.

With this in mind I wanted to capture a more controlled Berserker, still clearly a ruthless killer but unlikely to fall upon his own weapon in sacrifice or turn upon his squad-mates anytime soon.

I used a Beastmen axe and arms which fit perfectly on the Berserker torso and helped to give him a pose of martial arrogance – as though he has just felled an enemy champion and is now callously selecting the next who is worthy of facing him. 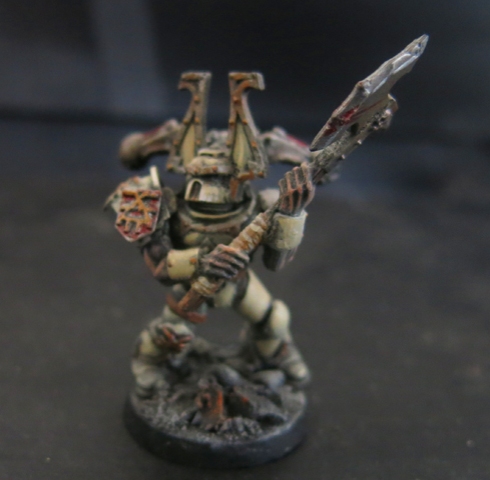 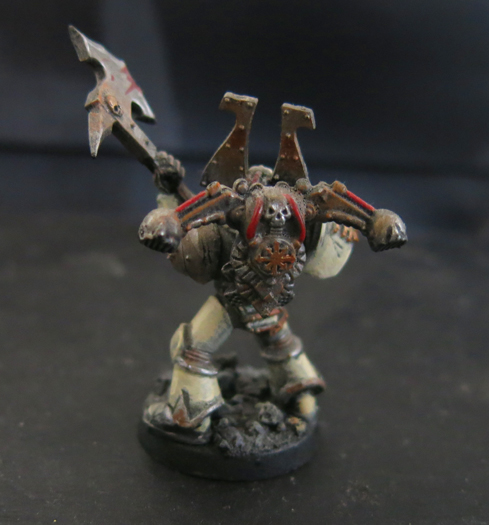 As well making these characters I also wanted to write a little more about the concept behind the Hawkmoths. I’ve deliberately wanted to keep my ideas about my Space Marines Chapter’s early history ambiguous, and just a little sinister, as that element of secrecy and uncertainty adds a great deal to the narrative of the official cannon. I want to know if the Minotaur’s are really descended from the World Eaters, or to find out more about the Charadons, or discover Cypher’s true goal – but I like not knowing better. The best example must be the two missing primarchs – there is no explanation that I can think of (within the context of the fiction itself) that could explain what they did that was bad enough to explain such total censure. That is their abiding quality, the thing that keeps people talking about them, guessing and theorising after all these years. What I’m driving at, somewhat pretentiously, is that I don’t know, and I don’t want to know, the origins of my Hawkmoths. The secret must be something powerful and terrible enough to make them believe that they were betrayed by the Imperium, that turning to the worship of Chaos would actually be better than continuing to live the lie of servitude to the Emperor. It’s not simply self-interest that drives the Beasts of Ruin but real bitterness, they don’t want to pillage loyalist planets just to accrue power or slaves, or even the attention of the Gods, but for revenge.

With that in mind I wrote a short piece on the influence of Khorne amongst the newly rebelled Beasts of Ruin.

The space marines of the Hawkmoths chapter were known for their berserk battle-rages and killing furies that often left allies and civilians dead and meant that few Imperial Commanders trusted them or called for their assistance unless it became absolutely necessary. One persistent rumour suggests that they were created through a blasphemous chimerical fusion of gene-seed from the Blood Angels and World Eaters, attempting to control the Black Rage of the former by exorcising it through the persistent fury of the latter. Whatever the truth to this it is certainly the case that many of the Hawkmoth’s tactical doctrines rely on an overwhelming assault on enemy positions regardless of losses and rumours from the front lines speak of inhuman butchery and wanton destruction. It is little wonder then that those berserkers who joined the Beasts of Ruin chose Khorne as a focus of their worship. For some this has led to a terrible degeneration, a red-madness that seethes within them and forces their handlers to keep them chained and sedated between battles. For others the transition has been less marked. Their battle doctrines barely changed when they replaced servitude to the Imperium with the patronage of the Blood God but in them the poison of chaos goes far deeper than it does in their squadmates and there are few who would not choose to face the fiery gaze of those frothing madmen rather than the icy, calculating eyes of their brothers.