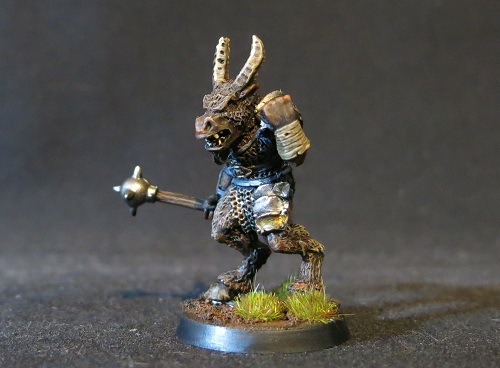 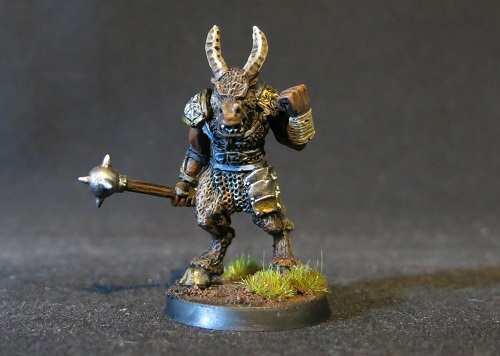 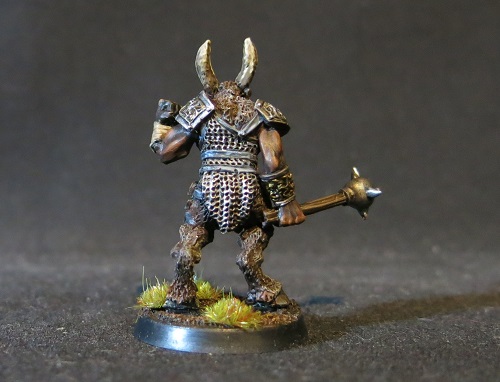 To me it looks like he’s shouting “You kids, get off my lawn!”. Or in his case probably “You elves, get out of my woods!”.

You don’t often see female greenskins so when I found this goblin witch from Knightmare Miniatures lurking in the unpainted pile I knew I had to include in my Fembruary painting marathon. 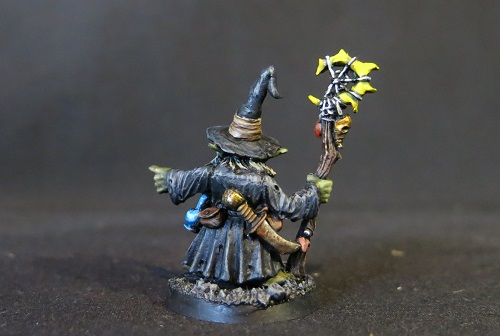 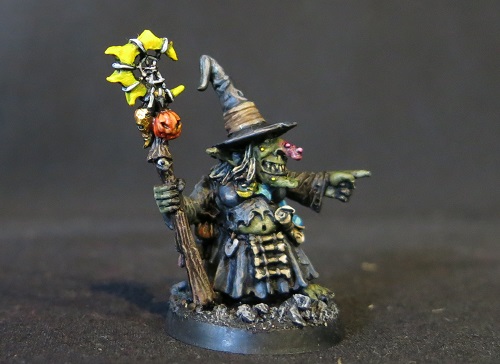 The range of female miniatures available to me for this challenge has impressed me a great deal over the last few weeks. When I first participated in Fembruary back in 2018 I really didn’t have very many and it’s pleasing to see how much that’s changed in recent years. Partly of course that’s my doing – by a natural process of accumulation I now own more models than I did three years ago so I had more to pick from. However I’m also seeing an increase in the number of female miniatures on the market, and in an increasing diversity of roles. Where once I would have struggled to find much beyond sorceresses and the chainmail-bikini brigade now there are even goblin women. Long may it continue!

Just a quick one today but this reptilian beastman (as opposed to a lizardman) has been sitting on my desk waiting to be finished for what seems like absolutely ages. A couple of days ago I realised that despite work on him stalling completely he really only needed another twenty minutes or so to be completed – and thus inspired I knuckled down. 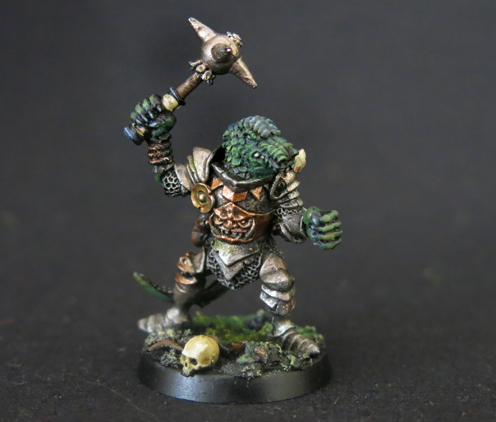 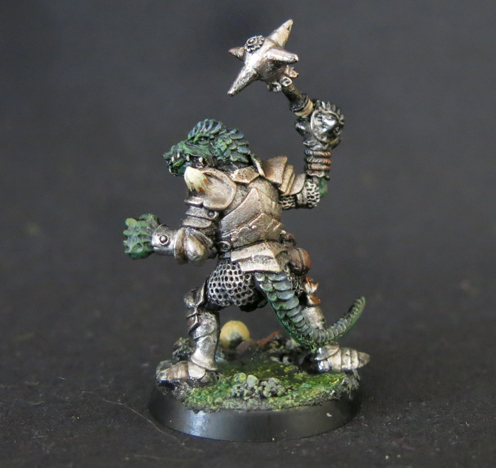 Amongst the various projects I have planned – but which are as yet untouched – I’d like to paint up an old school chaos warband based around the Knightmare Miniatures range, and so this cantankerous looking crocodile will hopefully be joined in due course by a savage brotherhood. Probably not for a while though as I’m trying to tame my spirit animal, the hobby butterfly, and focus on a few key projects for the time being.

The True King Of Beasts

Behold the noble unicorn! Wild and untameable, glorious to look upon, ferocious in battle and irresistible to the opposite sex – no wonder we Scots hold it in such high regard! All too often however they’re portrayed as fey, shy and ever so slightly sparkly creatures, gentle, elegant and fairly harmless, with an intimate knowledge of rainbows and not a hint of the savage sexuality that has been inspiring artists from Albrecht Dürer to the Gardens of Hecate (and before you click on either link it’s safe to assume they’re probably not safe for work).

This model however is less a unicorn and more a beastman, also notoriously wild and sexual creatures. Somehow, however, he comes across as just on the right side of noble, albeit still with a healthy dose of independence and feral ferocity. 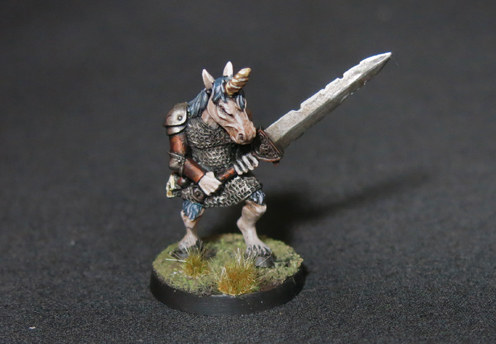 The model originates from the Pantheon of Chaos range by Knightmare Miniatures, which makes him a natural pair up for this clothes-phobic barbarian.

Deep within the forest two beastmen, one foul, one noble, battle for territory.

What Is Best In Life?

With so many projects on the go I’m trying to keep my focus and avoid veering off into any more new territory, at least until I’ve cleared my desk a little. However I couldn’t resist painting up at least one of the models from the Greenskin Wars kickstarter, the barbarian hero. Something about him reminds me of Hirad Coldheart from the Chronicles of the Raven (well worth a read if you’re in need of some old-school cheese) more than Conan.Then again, when it comes to recognisable blog titles Hirad just isn’t as wonderfully quotable. 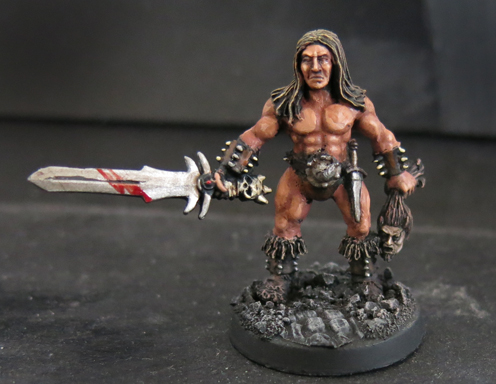 I went for a dark, tanned skin tone – I figured a man who lives almost exclusively outdoors and fears nothing except wearing a shirt wouldn’t be particularly pasty or pale. 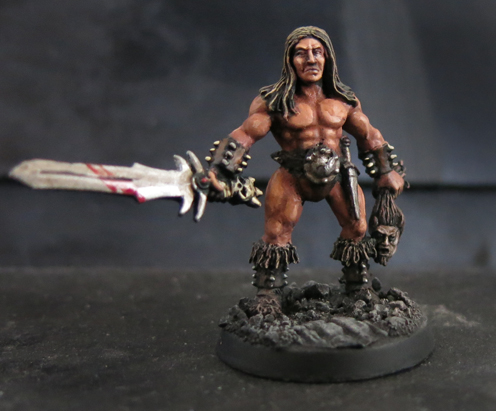 Fan’s of old-school greenskins take note; Greenskin Wars is currently having another kickstarter. There’s still a few days to go before it runs out and in the meantime there’s the chance to pick up several of the models from the last round alongside new stuff like the hobgoblins and bugbears. Speaking from my own experience the service I’ve received has been excellent and the quality of the models is outstanding so if you were on the fence about this one I really do recommend it.

Just before I took off on my holidays I received a parcel. Normally I don’t do ‘unboxings’ and I try to avoid banging on about projects I know I won’t be able to start for a few months. This time however I’m going to break with that because time spent showcasing Greenskin Wars is, in my opinion, time well spent.

For those of you unfamiliar with Greenskin Wars the range incorporates the old Crooked Claw models (good news for those like me who skipped blithely through life, unaware that Crooked Claw even existed until suddenly it didn’t) alongside a range of new models courtesy of “Goblin Master” Kev Adams* and spearheaded by Diego Serrate.

*Apparently he thinks being called “Goblin Master” is a bit silly, but everyone does it anyway, Well if it bothers him he shouldn’t make such amazing looking goblins should he?

Late last summer a kickstarter campaign was used to fund the range, sculpt the new models and so forth, although those who missed it should keep an eye on the Knightmare Miniatures store, soon to be home to the range, as well as various Chaotic creatures from the astonishing Pantheon of Chaos range and various Rogue Trader-esque Space Raiders. Those of you who’re on facepuke (and sadly, nowadays, who isn’t?) would also be well advised to join the Greenskin Wars group to keep up with the latest developments. 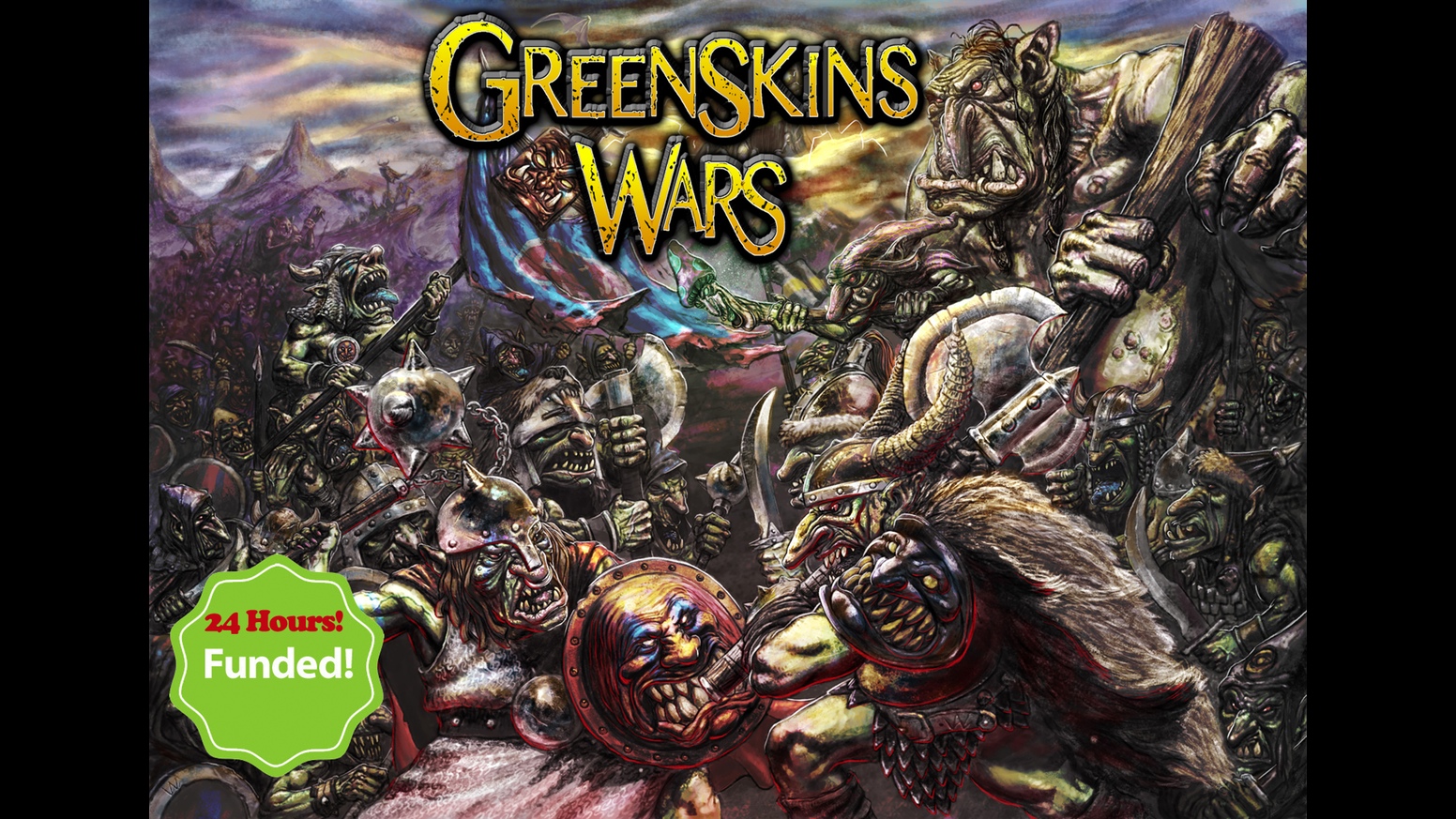 I’ll confess, I’ve always loved the greenskins. They’re not, as such, an evil race like Chaos, the Undead or the Skaven – although undoubtedly it must feel like that when they’re burning down your village. Rather they’re mischievous, always up for some rough-housing or spectacularly destructive practical humour, squabbling amongst themselves, needing to be kicked into line and living by the maxim “to have a good time, all the time” even if that ends up being horribly violent for everyone else. As Warhammer races go they’ve undoubtedly evolved the furthest from fantasy’s roots. Tolkien would recognise the elves of Ulthuan but Sauron would have been lucky to get out of Mordor if his armies had been made up of the squabbling goblins we know and love today. (Digging back a little further of course a norseman wouldn’t have recognised either of them, but that’s a blog for another day). Likewise 40k may have pretensions of grandeur, as a great, decaying dystopia, but the Orks still go roaring through the middle of it on their motorbikes, scattering the serious-faced eldar and space marines, and making fart jokes in front of all the grandiose fall-of-empire sobriety.

What’s more we let them get away with. No matter one’s attachment to the funereal grim darkness of the far future or the grubby madness of the Old World everyone cracks a smile at the arrival of a thuggish ork or a scheming goblin. Perhaps it’s because they’re all, at heart, naughty schoolboys, and most of us discovered them when we too were naughty schoolboys. In the greenskins we recognise ourselves as we would like to be; carefree and burning with the joy of life, not burdened by duty and responsibility like a Space Marine, not bravely facing the yawning grave like the Eldar, but racing through life laughing, never worrying about hardship or want and when we go, going out with a bang that leaves our mates’ ears ringing for a week.

Until recently however I have pretended to myself that I am above such things as fantasy greenskins. My love of Orks in 40k means I’ve tended to focus all my greenskin tendencies in that direction. The orcs and goblins of the fantasy realms would only serve to dilute my creative energy, divide my ideas and distract me from those projects I should be focussing on. How foolish of me – didn’t I see that goblins thrive on distraction and that nothing possesses more energy and (generally destructive) creativity?

It was inevitable, then, that the odd model would start to sneak in. This one was on sale, this one was a good deal, someone was practically giving this one away, and thus they gathered on the edge of my painting desk, pushing and shoving and flicking snot at the stern Chaos space marines who continued to get all the attention. Somehow, whilst I continued to deny to myself that I was even buying them, a sizeable army accumulated. Greenskin Wars has been the final straw, pushing me over the edge and forcing me to finally face the goblin horde, to stand tall and proudly say “I love goblins and I’m not afraid to admit it!” Now I just need to paint them all…

In the meantime though let’s take a look at what actually arrived in that box of exciting metal figures!

First of all we have this raucous band of feral goblins. 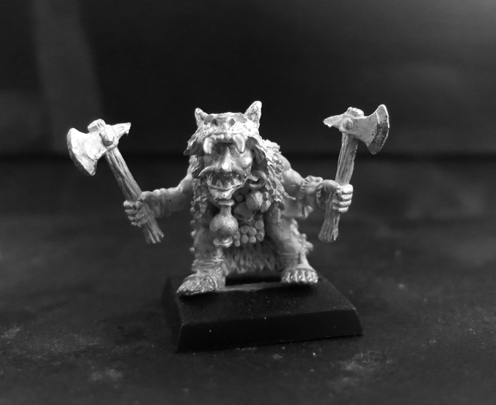 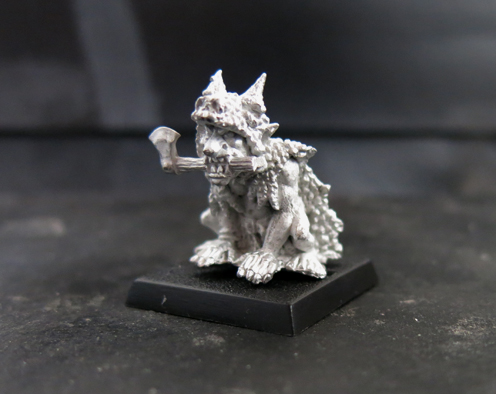 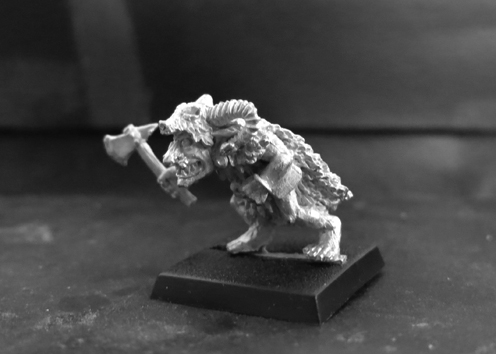 Whilst his impish-looking mate isn’t much better, he’s wearing a bat! 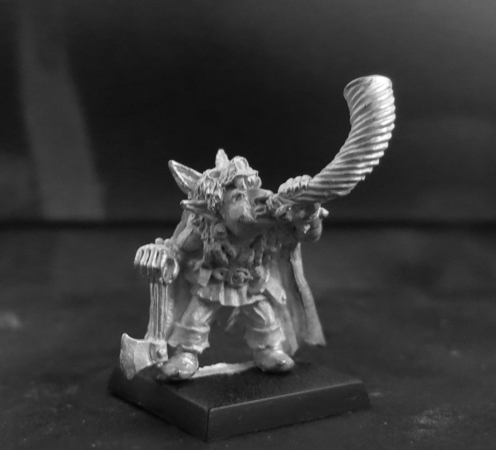 As goblins go some of them are quite large, although that’s understandable given the level of detail that’s been packed onto them. I also tend to assume that goblins, and orcs, are all different sizes anyway so it doesn’t particularly matter. Here’s the chief of the feral goblins posing with a GW night goblin and a WIP 40k ork by way of a size comparison.

As well as the band of feral goblins I also got myself this catapult, originally sculpted for the Crooked Claw range. I’ve not assembled it yet so you’ll have to make do with this picture of the crew, plus a stock image of the catapult itself. 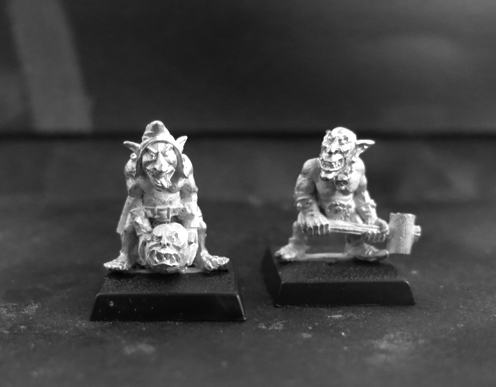 As usual with kickstarters there were a few ‘bonus’ models to sweeten the deal for supporters, including this (decided non-greenskin) clothes-phobic Conan look-alike.

On a more goblin-esque note we have this hobgoblin, who’ll probably be serving as taskmaster to the catapult crew. 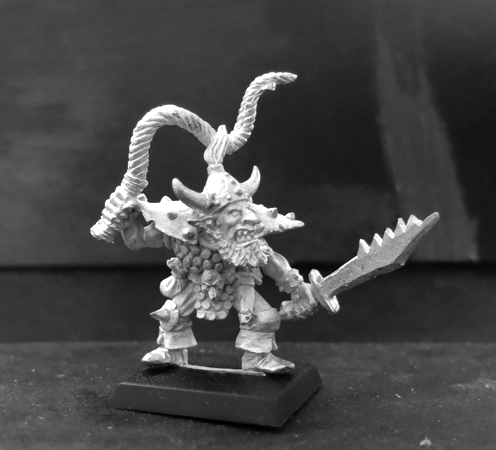 Again he’s a rather big lad, although as the taskmasters are usually orcs that’s actually quite fitting. The hobgoblin was included in the original kickstarter campaign as a stretch goal which, if achieved (and clearly it was!) would unlock a whole new hobgoblin faction and previews shown over on the facebook group show this to be well underway. 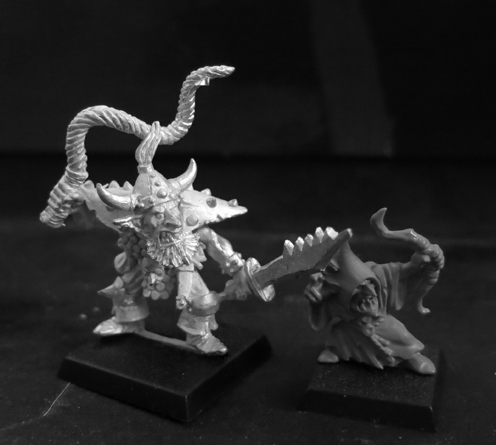 However my favourite thing has to be these mushrooms. I’ve always liked the mushroom gardening aesthetic of the goblins, particularly the night goblins, and these giant ‘shrooms bring that to the collection with aplomb.

That’s not all though, we also have these smaller mushrooms, perfect for planting amongst the ranks of the goblins.

Now I know I said I wouldn’t be doing anything with these for a couple of months, and I won’t – but I couldn’t resist digging around in the bits box and assembling a couple of additional goblins to join the forthcoming mob. 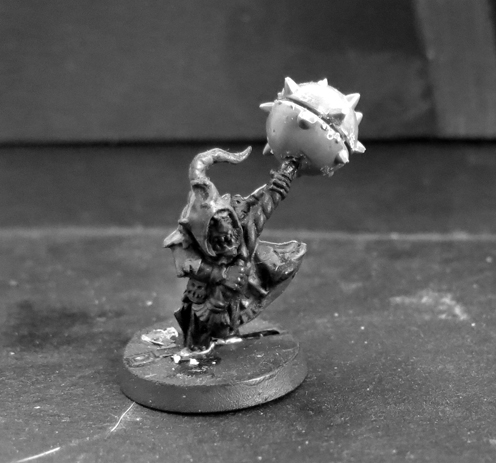 Now I just need to get some of my other projects finished and I’ll be ready to tackle this rascally green mob. That’s if they don’t steal the brushes and fart in the paint in the meantime…