I’ve always felt that the dreadscythe harridans were a little bit naff. The concept of savage ghosts with jagged claws is suitably terrifying in and of itself but Games Workshop, in their wisdom, clearly felt it wasn’t enough. Instead they kept adding things, striving for something unique that they could put their stamp on, and ended up over-egging the pudding. It was bad enough that they gave them a contrived back-story about them all having been doctors (and seriously GW, haven’t you done the evil doctors thing to death by now) but then they decided that they would all be female as well. Of course conveying femininity isn’t easy when all you have to work with is an animated sheet with enormous claws, but rather than rise to the challenge they decided to make do with putting flowers in their hair. Here’s one of the studio models so that anyone who isn’t familiar with them can see what I’m on about.

I had intended to let the murderous-stabby-lady-doctor-flower-power-ghosts pass me by, but I got the chance to buy a single one rather than a full box and talked myself into it on the grounds that she would bring variety to my Nighthaunt warband. What better time to get her painted than Fembruary? 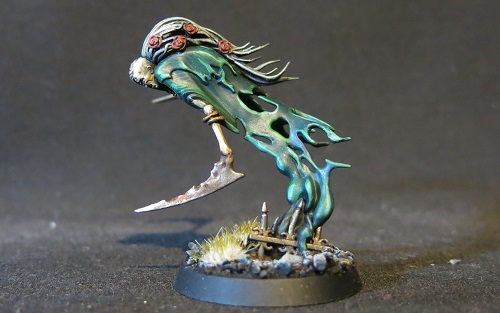 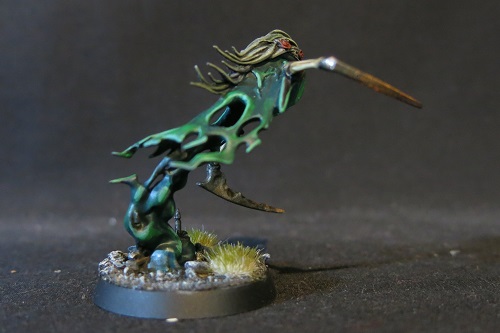 I replaced the skull of the original model with the head from the zombie kit (also from GW) which I think makes her look a bit more scary, and – to my eye at least – makes the flowers look less out of place.

Like Loading...
This entry was posted on Friday, February 18th, 2022 at 6:42 am and tagged with Age of Sigmar, Dreadscythe Harridan, Ghost, Nighthaunt, Undead, Warhammer and posted in Nighthaunt. You can follow any responses to this entry through the RSS 2.0 feed.
« Ride The Lightning – Part 3
Khagra’s Ravagers »