Did you think you’d seen the last of my Stormcast Eternals? Well you thought wrong dincha?! Mind you I can’t blame, I didn’t think I’d ever paint one Stormcast Eternal, let alone two. And yet, I find myself very taken with the latest wave of Stormcast miniatures that were released over the summer. Not all of them of course but there’s some that really stand out, not least of which are the Annihilators.

When I was a youngster I thought Terminators were the coolest Space Marines (actually, who am I kidding, I still think that). Yet whilst Games Workshop struggles to find a way to scale up Terminators into the Primaris era they’ve had no trouble recreating the concept for their fantasy Space Marines and given us the formidable and heavily armoured Annihilators. And you know what? They look bloody cool. 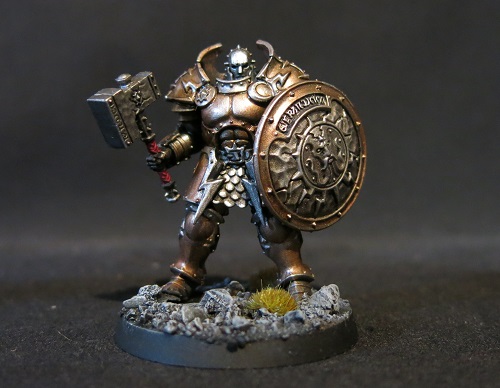 I’ve got absolutely loads of half-finished miniatures on the desk at the moment (even more than usual if I’m honest) and so I’m trying to have a bit of a clear out. Hopefully this will mean lots of posts over the next few weeks as I try to focus on just getting things finished rather than allowing myself to be tempted to start new things. Of course it’s also going to mean things are even more scattershot than they normally are but by now I’m sure you expect nothing less.

On a final note I’ve just realised this is my 800th post, and this blog just passed its 8th birthday a couple of weeks ago. Who would have imagined back in 2013 that it would still be going strong today? Not me if I’m honest; I was keen to give blogging a fair try but outside of this site I’ve never been someone who was entirely comfortable sharing my thoughts on the internet and I didn’t really expect this to be any different. To my surprise the blog has grown into a big part of my hobby and a constant source of motivation and inspiration.

If that’s not enough milestones for one post this model marks my 1000th miniature completed since I started keeping a tally in January 2017. I suppose I could look back through old posts to find out how many I’ve painted since I started blogging but I reckon that time might be better spent working on the next thousand, many of which seem to jostling for space on the desk already…

Like Loading...
This entry was posted on Tuesday, November 23rd, 2021 at 9:48 am and tagged with Age of Sigmar, Annihilators, AoS, Stormcast Eternals and posted in Stormcast Eternals. You can follow any responses to this entry through the RSS 2.0 feed.
« Life On Mars – Part 3
Mo’vember Slayers »