The Kruelboy Orcs are, based on their name at least, both cruel and poor at spelling. Perhaps in an effort to combat this failure of the education system they appear to have embraced a kind of “bring your child to work day” – as we shall see below.

First of all however we have the leader of my nascent Kruelboy clan, a wily Killaboss. Lacking the raw brawn of most Orc leaders these lanky individuals make up for it with ruthless cunning, dirty tricks and a hell of a lot of spikes.

One of my favourite details on these models is the way that they have more armour on their backs than on their fronts on account of the fact that they are far more concerned about being stabbed by their own followers than they are by the enemy! 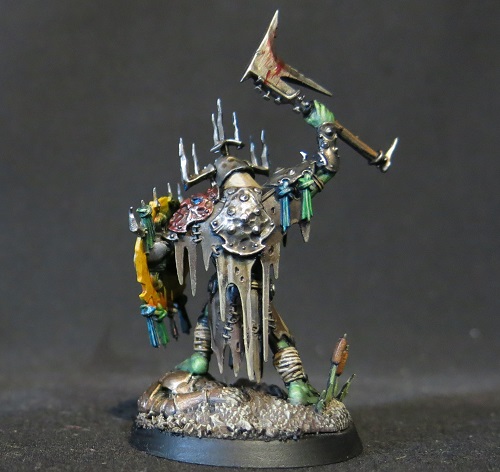 With foes in front and foes behind who can blame an Orc warlord for recruiting a “trustworthy” little squire in the form of a Stab-Grot.

Seen side by side of course it’s hard to shake the image of a father taking his diminutive offspring to the office.

Gathered together with their Gutrippa underlings and Hobgrot allies, this little warband already looks set to trouble Sigmar’s realm.

I managed to snag the Orc half of the Dominion boxset so don’t think you’ve seen the last of these nasty gits, there are plenty more boys lurking around the painting desk waiting for their moment…

Like Loading...
This entry was posted on Monday, September 13th, 2021 at 6:22 am and tagged with Age of Sigmar, AoS, Killaboss, Kruelboyz, Orcs, Orruks, Warhammer and posted in Orcs. You can follow any responses to this entry through the RSS 2.0 feed.
« Hobnobs – Part 1
In The Green Wood – Part 2 »