It’s the end of March and, although I don’t have any new models to show you, I decided that a post was in order to give a nod to a couple of excellent blogs and the hobby challenges they’ve been running over the past month.

First of all there’s the Neglected But Not Forgotten challenge courtesy of Ann’s Immaterium. Despite the fact that I didn’t expect to get very much done at all this month I actually managed four models for this, all of which have been lingering on or under the painting desk for far longer than they ought to. A big “thank you” is owed to Ann for giving me the push to get on and paint these.

Now usually what we see on this blog is just miniatures and I try to keep myself out of the picture, as far as I can. However this was also the month of the T-shirt challenge being run by the Imperial Rebel Orc – or IRO as he’s widely known. IRO is fast becoming a household name (in his own house at least), an enthusiastic hobby powerhouse, friend of this blog (and this blogger) and all round top bloke. He’s also barking mad and so for his T-shirt challenge he wants to see his fellow hobbyists posting pictures of their torsos (preferably whilst clad in their favourite T-shirts). Anyway, so long as this doesn’t escalate into an underpants challenge next month I’m game so, having clarified that this isn’t a wet T-shirt contest (and then dried out both myself and my T-shirts) here’s a few pictures of my chest for IRO’s enjoyment – and hopefully yours as well.

I don’t actually own as many decent T-shirts as I thought I did, I seem to have worn a few of the to rags and not replaced them, but here’s a handful of the more entertaining ones.

This one was a gift from my fiancée. It’s a bit faded now, probably as a result of me wearing it whilst working in the hot sun, but it’s still clear enough and it makes me chuckle every time I see it.

And because this is a miniature’s blog and not, as anyone stumbling on it for the first time my assume, a fashion blog here’s a couple of T-shirts with a Warhammer theme. 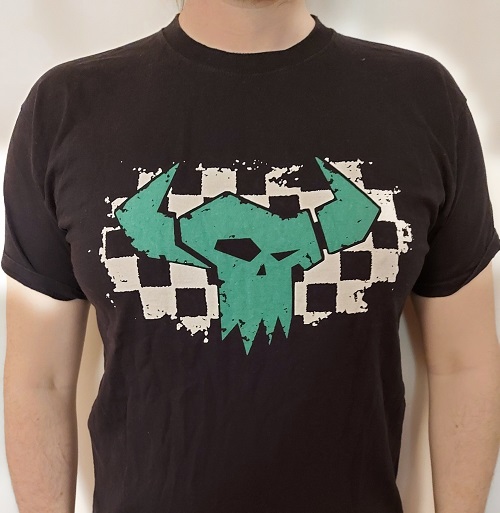 Anyway, that’s my brief foray into one type of modelling completed – from now on I’ll be sticking firmly to the other type! I’m not sure what I’ll tackle next in terms of painting miniatures but I do have a couple of diminutive Blood Bowl players who are within stretching distance of the finish line so it might well be them.

Like Loading...
This entry was posted on Wednesday, March 31st, 2021 at 7:18 am and tagged with T-shirts, Warhammer, Warhammer 40k and posted in Editorial. You can follow any responses to this entry through the RSS 2.0 feed.
« Data-Scrivener
Scum’s Thoughts – Part 5 »