A bit of a rescue job this one and there were times when I wasn’t sure if it was ever going to work out, but I got there in the end (and just in time to be another contribution to Fembruary as well!). Something I’ve been enjoying about the “House of…” series of books for Necromunda has been the introduction of new hangers on for each of the gangs, each of which adds to the unique flavour associated with each House. House Escher for instance produce all the chems relied upon by other Houses and the drugs (legal and otherwise) consumed by residents of Hive City. Do your Goliaths need steroids to help those muscles grow and combat stimulants to turn them into berserkers at the touch of a needle? Do your Van Saar need radiation therapies to stop their own weapons from poisoning them? Does your Enforcer captain need a pick-me-up before he hits the streets for another long beat, and something to help him sleep when he returns to his bunk after the horrors he’s seen? Then you need to buy them from House Escher!

Of course as well as the senior Chymists who run the labs of Hive City there are plenty of underlings, not yet inducted in the deeper mysteries of the Chymist Cults or ready to become Matrons of their own labs, who end up going downhive to pick up some practical experience by running with the gangs. These Apprentice Clan Chymists lend their skill at mixing chems to the girls in the gang, whilst getting to explore new areas of the underhive, discover exotic fungi from which new concoctions can be brewed, and try out experimental “cures” on gangmates too desperate or too badly injured to resist. 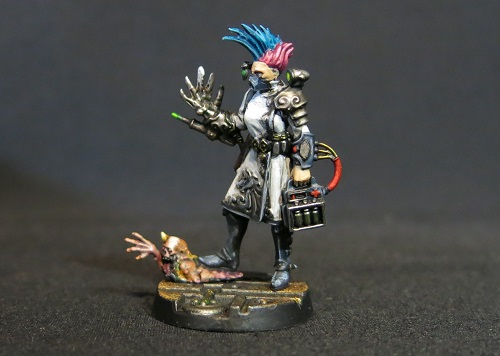 I based my conversion on Sanistasia Minst from the Kill Team Rogue Trader box, with a head swapped in from an Escher ganger. I started to paint poor old Sanistasia some time ago, made a bit of an arse of it, tried to fix her, failed, shoved her in a box in disgust and then retrieved her and tried to fix her several more times before we got to this stage. As a result she’s acquired quite a catalogue of flaws which I had to attempt – not always successfully – to work around, cover over and generally deal with. Thus the end result is not quite as good as I’d have liked, but she’s good enough and she’s finished so I’m happy enough to call her a win.

Like Loading...
This entry was posted on Saturday, February 27th, 2021 at 7:12 am and tagged with Clan Chemist, Clan Chymist, Escher, Necromunda, Warhammer 40k and posted in Necromunda. You can follow any responses to this entry through the RSS 2.0 feed.
« A Princess Of Mars
Zarshia Bittersoul »