Do you ever find a miniature where as soon as you see it you just have to paint it? It just speaks to you and all your careful planning and budgeting goes out the window in a heartbeat. In a fever of enthusiasm you rush to acquire it, you get it assembled and base-coated and then… everything stalls. Instead of a beautifully painted finished piece it glares at you with undisguised criticism whilst you avoid its gaze and try to paint other things with affected nonchalance. This is the story of the Sloppity Bilepiper.

Is there a dafter name in the entirety of the Games Workshop range, or indeed one more fun to say, than the Sloppity Bilepiper? I loved it as soon as I saw it, recalling as it does the old carnivals of Nurgle of yesteryear, and snapped it up as soon as I could. In my review of the Nurgle Daemons released back in January of 2018 I noted;

“Nurgle loves a party. He’s the god of life and death and though the latter aspect has often been the focus when it comes to the models, with sloughing flesh, weeping sores and spilled guts everywhere, with the Bilepiper we get to see the other side of things. Here is a model which encapsulates the core message of Nurgle’s worshippers – today we celebrate for tomorrow it will be too late. They party like there’s no tomorrow and one glance at the diseases they play host to suggests there probably isn’t. “

Sadly, despite starting out with great intentions and making good progress on the model as soon as I’d purchased it I stalled when it was almost finished and never managed to push it over the final hurdle. I think I’ve planned to paint it for every neglected model challenge I’ve entered in the past three years or so, yet always the challenge has ended and the Bilepiper has remained unchanged. This year it’s been particularly neglected, with Covid-19 wrapping it’s loving arms around the globe I’ve found myself disinclined to tackle any of Nurgle’s servants. I can’t quite put my finger on why, perhaps it’s superstition or just pandemic fatigue, but I find myself feeling as though the plague god is getting more than enough attention at the moment without my involvement.

Both the Bilepiper and I have tolerated a lack of progress long enough however so back onto the painting desk he goes for a few more rounds against the brush. Here he is, finished at last and proving that these things are never so difficult if you just get on with them. 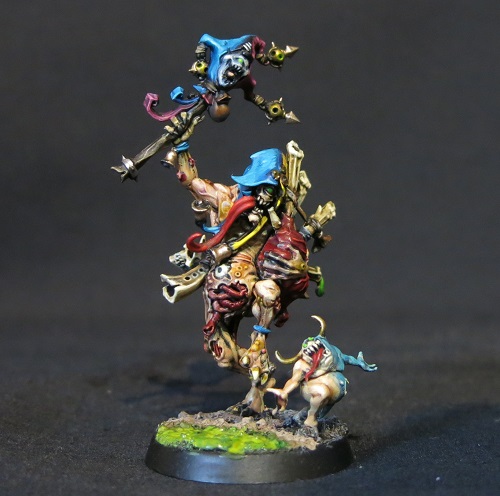 I really wanted to play up the appearance of a clownish, playful jester, so gave him bright and motley clothes. By way of contrast I made the flesh fairly realistic and human looking, rather than leaning on the mucky green that GW prefers for their Nurgle models. I still have quite a backlog of Nurgle miniatures, both daemons and mortal – including a number of unfinished Death Guard, so as soon as I overcome my Covid induced squeamishness I’ll crack on with them.

Like Loading...
This entry was posted on Friday, November 13th, 2020 at 6:50 am and tagged with Age of Sigmar, Daemons of Chaos, Death Guard, Nurgle, Sloppity Bilepiper, Warhammer, Warhammer 40k and posted in Chaos Daemons, Maggotkin of Nurgle, Nurgle. You can follow any responses to this entry through the RSS 2.0 feed.
« The First Slayer
Alarith Stoneguard »

23 responses to “The Toxic Waltz”