Tomb It May Concern – Part 2

A few weeks ago I showed some pictures of the Necrons that I’d been working on and talked a bit about some of the colour schemes I’ve been thinking of using for my collection of maniacal mechanical aliens. To be honest I’m no closer to reaching a conclusion but that’s ok, I have no deadlines for this project, plenty else to keep me entertained and most of the models I plan to include have yet to reach me, being part of my as yet unmade “made to order” Indomitus set. That said I’ve not been entirely idle and as a result I’ve accumulated enough finished material to make another update worthwhile.

First of all we have the “black and white” colour scheme that I showed previously. Amongst the suggestions and feedback I received Alex from Leadballoony suggested toning down the vivid green on the model’s gun, pointing out that it was rather overwhelming – especially on such a monochrome model. I was inclined to agree, so here’s the updated version, hopefully a little less garish. 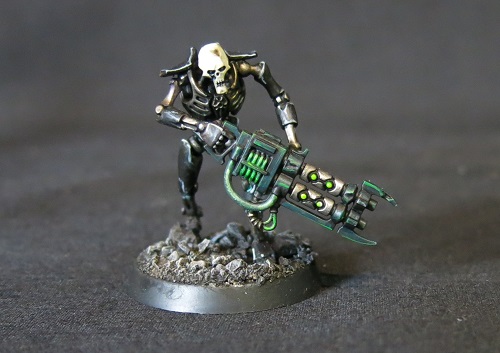 And by way of comparison, here’s how he used to look. It’s not a huge change but hopefully it’s sufficient.

I’ve always liked the idea of Necrons as space-zombies, tarnished, rusted and on the verge of mechanical failure, rather than the sleek legions of automatons they might once have been before millions of years in their crypts took their toll. This is an aesthetic which this current wave of releases looks to be embracing more than any have previously. The first model I painted attempted to capture this and although I remain pleased with the results I struggled to make it look good on multiple models.

Looking at artwork for inspiration however I kept coming back to the idea that the other schemes I’ve tried have been too clean, and failed to adequately capture the sense of mechanical decay I was looking for. For many years this has been my go-to image when thinking about Necrons and I didn’t want to stray too far from it now I’ve finally started to paint some of my own (all the art shown here is copyright of Games Workshop by the way, and was looted from a mysterious tomb without permission). 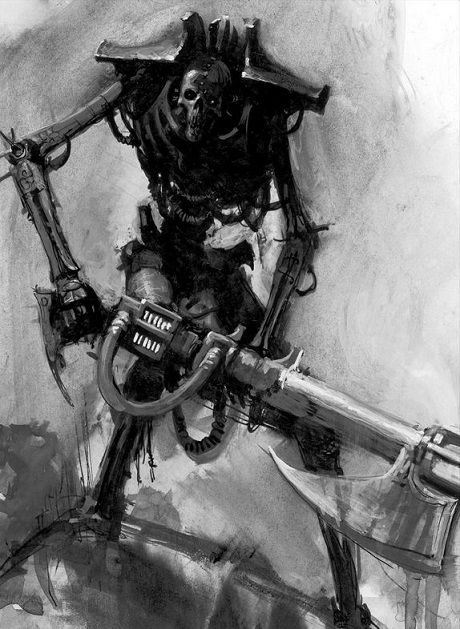 Likewise this image taken from the cover of the new codex again emphasises this aspect – these may be technological gods, elevated by science to levels far beyond the wildest dreams of the other races of the galaxy, but they stand at the point of collapse.

Their systems are failing, their minds corroded into madness and the grand achievements of rationality and engineering upon which they built their empire can only struggle against the superstition and insanity which holds the galaxy in its sway. 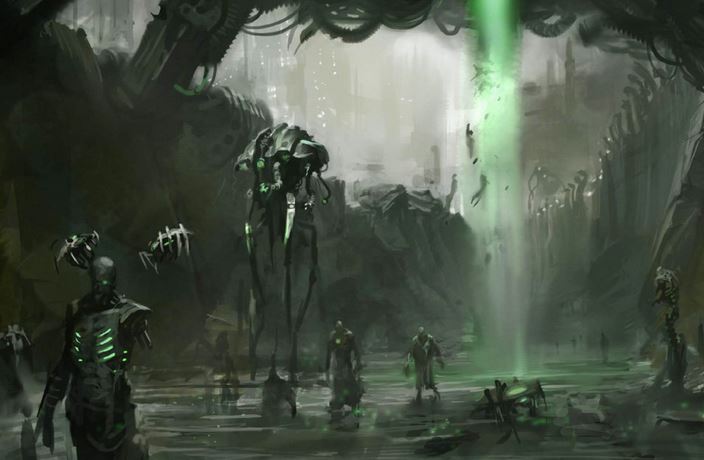 Back when I first started on this project I’d tried out an alternative colour scheme that, like the very first one, tried to explore this side of the robots. In the end I decided not to pursue it but the model was still sitting there, part painted, and I decided it was worth following the experiment to its conclusion after all.

I incorporated some elements of the “black and white” model but otherwise went for a very traditional metallic Necron, albeit one caked in muck, grime and corrosion. Honestly I really like it, and it certainly fits the bill of being nice and straightforward to paint. Is this the scheme I’m going to settle on? I think it’s too early to tell, I’ve come close to declaring for one scheme or another several times but as I say, at the moment there’s no rush. Here’s the full line up of current contenders.

As part of exploring this subject I decided to try painting a Deathmark. These were for a long time my favourite Necron models, only pushed off the top spot by the range of amazing miniatures which have appeared recently. As specialist assassins their colour scheme needn’t match exactly with the rest of the army anyway so I felt free to mess around a bit and explore a few ideas.

If I decide to go with either of the schemes I’ve focused on above for the rest of the army – which is by far the most likely outcome at the moment – this model will fit in just fine. 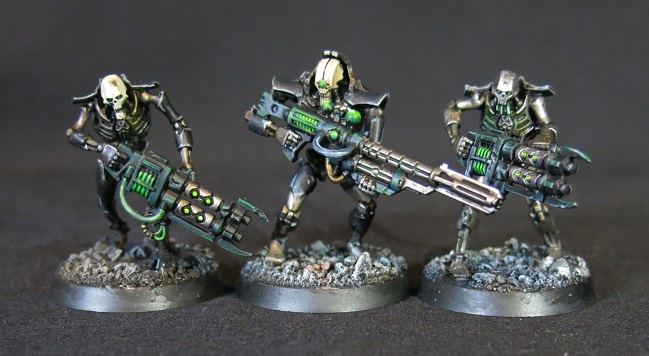 Anyway, that’s where I’m up to with the Necrons – I’m still having fun exploring these models and playing with ideas and I hope none of you are screaming at your computer screens for me to just pick a scheme and get on with it. Check back in a month or so and I’ll have decided to paint them all pink or something…

Like Loading...
This entry was posted on Monday, November 9th, 2020 at 7:04 am and posted in Uncategorized. You can follow any responses to this entry through the RSS 2.0 feed.
« Iron Golem – Part 5
Appetite for Destruction – Part 4 »