What with it being Orktober I had a grand plan to spend the month painting loads of greenskins. I’ve got all kinds of things I’d like to add to my 40k Ork army, and a few more brutes for my Ironjaws Warcry warband (and speaking of Warcry I reckon that as I have the other three Destruction factions represented by warbands now it’d be fun to put together some Savage Orcs as well). Most pressingly I’ve been claiming that I’ll work on my Orc Blood Bowl team “soon” for far longer than the word “soon” is generally taken to represent (except, possibly, by geologists). After all it was one of my key goals for 2019 so, as we hurtle towards the end of a turbulent 2020, I’m starting work on them right on time!

However… That was before I came up with my scheme to play some undead vs undead Warcry around Halloween. With ghosts and ghouls to be concentrating on over the next week or so the poor old greenskins have been popped once again onto the backburner – although I promise I’ll get to work on them properly in November.

By way of showing willing however, and putting my brushes where my mouth is when it comes to Orctober, I have made a start by painting up two of the boys. Here’s a thrower… 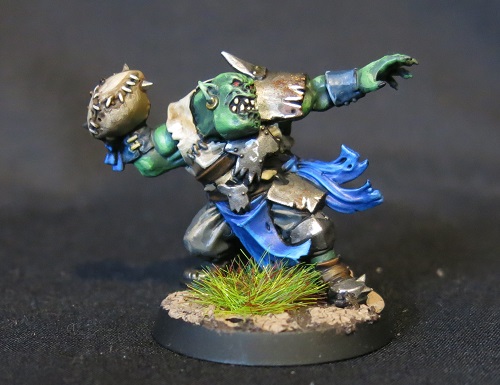 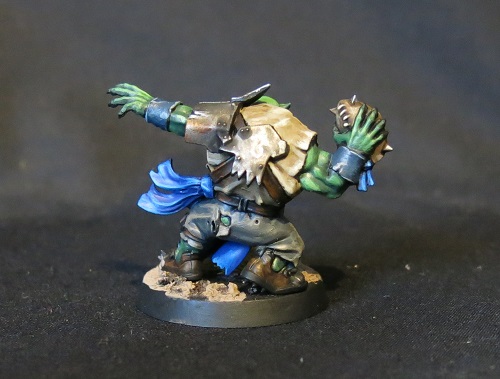 … and here’s a black orc blocker (that being a heavily armoured thug who enjoys hitting people and has only a rudimentary grasp of sport – a normal orc in other words!). I reckon that for orcs the easier a number is to count to the better it is (a finger you’re using to count on being a finger that would be better used clenched into a fist and smashed into some git’s teeth after all) so the flashy, show-off thrower is number three, the highest number he could claim without getting a kicking from the black orcs, who’ve used their brute strength to claim the “best” two numbers available. 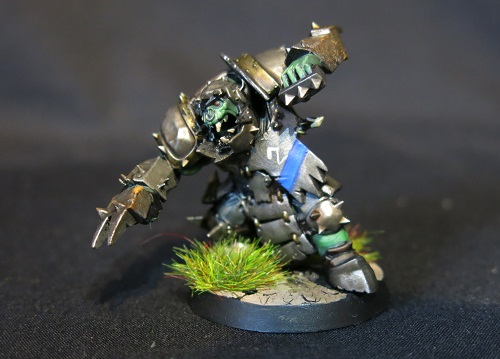 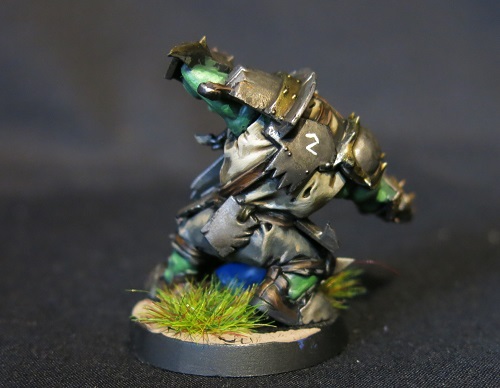 After building up a large 40k greenskin army over the last decade I’m hopeful that the rest of the team should be fairly straightforward for me to paint, plus as one of the races in the (soon to be replaced) starter set alongside humans I presume they are relatively forgiving for a newcomer to the sport to play as well. Expect to see more of these as soon as the dead guys are dealt with, and nag me to get on with it if you don’t.

Like Loading...
This entry was posted on Friday, October 16th, 2020 at 7:32 am and tagged with Blood Bowl, Orcs, Warhammer and posted in Blood Bowl, Orcs. You can follow any responses to this entry through the RSS 2.0 feed.
« You Gits!
Gridiron and Glory »