The eternal mystery of just who ate all the pies (the burgers and the fries) has been solved – it was these fat bastards. They also ate the pie salesman, his pie stall and the car he drove up in. Yes, it’s true – filled with enthusiasm for my ogre project I cracked on and painted up the leadbelcher, the one who brings a cannon to the knife-fights of Warcry. 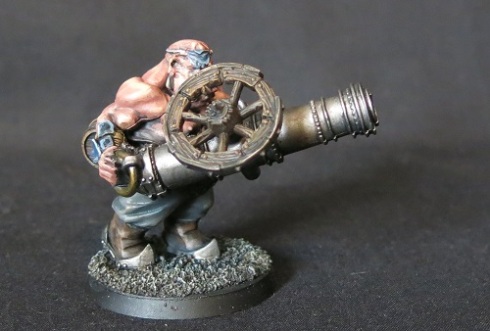 I made one slight tweak to the stock model, adding a cannon wheel to the gun to make it look even more like he’s just picked the thing up (to the horror of the poor humans or dwarves who’d been crewing it and thought they were safely behind the lines). From some angles it covers up his pretty face but that’s a sacrifice I can make!

Of course the ogre army has never been just about the fat boys, someone needs to do all the work that the ogres are too big or lazy to bother with, not to mention providing a handy meal if times get tough. This role goes to the gnoblars, little greenskins related to goblins who live symbiotically with the ogres, doing the menial tasks so that the big guys can concentrate on eating and fighting, whilst being protected from danger by their bulky, aggressive masters (at least until said masters fancy a snack). Thus the final touch the warband required was a pair of the little dudes. 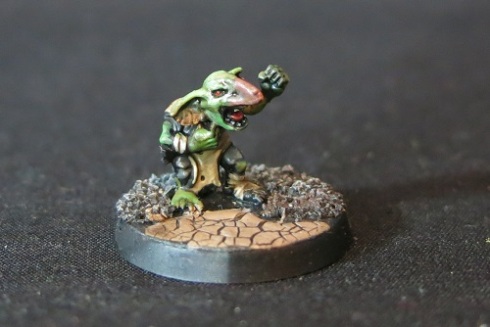 With these three additions the warband is complete – and turned around from start to finish in a week no less!

Here’s the whole crew, ready to get out there and pick a fight. I like to think that the gnoblar on the left is spoiling for a fight, backed up by his big pals, whilst the one on the right with his drooping ears and worried expression has a rather more pessimistic opinion of their chances!

I’ve enjoyed working on these a lot so I may well come back to them at some point, I have a few other ogres kicking around that I could use to make a full squad or two and I reckon it’d be quite fun to add a few Ironguts and see what they bring to the gang. Right now though I think I’ll turn my attention elsewhere and see what else is lurking on or around the painting desk and takes my fancy.

Like Loading...
This entry was posted on Friday, September 11th, 2020 at 6:25 am and tagged with Age of Sigmar, Gnoblars, Leadbelcher, Ogors, Ogres, Warcry, Warhammer and posted in Ogres. You can follow any responses to this entry through the RSS 2.0 feed.
« Appetite for Destruction – Part 2
Cursed In Eternity – Part 6 »

27 responses to “Appetite for Destruction – Part 3”