Ok beautiful readers, it’s time for me to be completely honestly with; I’m not going to finish the Chaos Knight in July. I know it’s still early to be giving up, we’ve all heard (and probably participated in) heroic, last minute painting whirlwinds that get some model over the finish line to completion in the small hours of the morning ahead of the big game or the painting contest to be held the next day. Why don’t I just man up, gird my loins and crack on you ask? The fact is the July has proven to be even busier for work than I expected and, with three flat-out months under my belt now, I’m knackered (this is also why I’ve not been reading and commenting on other people’s blogs much either). There are only so many hours in the day and in the end the conclusion has to be that there’s more Knight left than month. Fear not, I’ll finish him in August instead – when things should be a bit quieter and more manageable anyway. Luckily Azazel, who’s Jewel of July challenge has been the spur to my tackling the project again, has also extended said challenge through to the end of August as he too grapples with that many armed monstrosity known as real life.

In the meantime however I have managed to make some progress over the last couple of weeks, so this post won’t just be moaning and excuses from me! The main torso, one arm and the infamous “difficult” shoulderpad that started my struggles with this model in the first place have all been completed, leaving just the head, the other arm and shoulderpad and the various accoutrements to complete. Put like that it doesn’t sound like very much does it…

Anyway, let’s take a look at him. Due to the sheer size of this bad-boy I’ve used bigger images than normal, clicking on them will allow you to bask in their glory at full size. 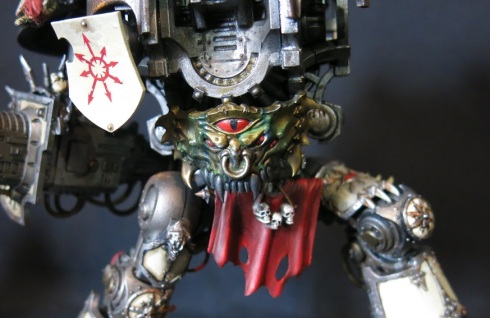 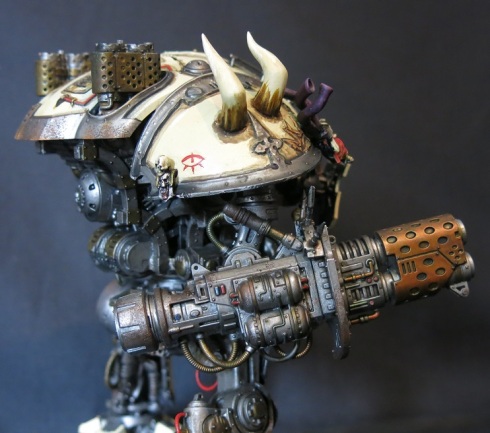 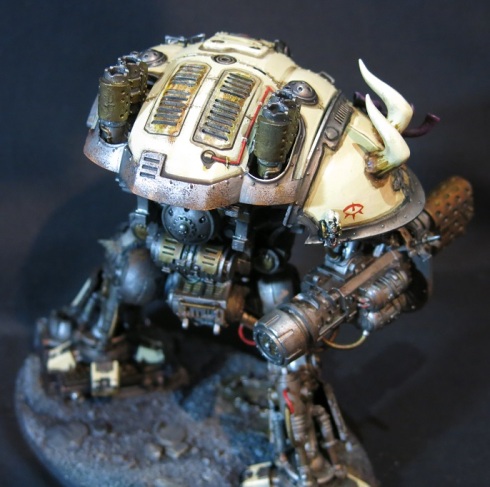 Despite the set-backs that have slowed progress on this project to a crawl at times I’m still feeling very enthusiastic about it, especially now it’s reached this stage and started to look like a true Knight of Chaos, rather than just a pair of legs. There are still a number of challenges ahead (and those are just the ones I know about) but hopefully by the end of August (and maybe even sooner) the beast shall walk!

Like Loading...
This entry was posted on Monday, July 27th, 2020 at 6:34 am and tagged with Chaos, Chaos Knight, Chaos Space Marines, Warhammer 40k and posted in Chaos Knight. You can follow any responses to this entry through the RSS 2.0 feed.
« Freikstorn Strix – WIP
Doom Rocket! »