Time to add a champion to the Cawdor gang, and what better way to arm him than with a heavy flamer – perfect for toasting any and all heretics he encounters? This fanatical pyromaniac goes by the name of Berthroc the Unworthy and stands ready to bring the Emperor’s mercy to Ironhouse and all who dare to dwell there. Some men just want to watch the hive burn and all that… 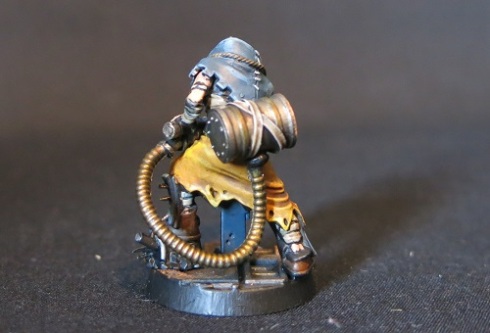 Of course just because he’s an arsonist extremist hell-bent on destruction doesn’t mean he shouldn’t have a pet, and what better companion than a Necromundan giant rat (which in this case goes by the name “Biteum”)? 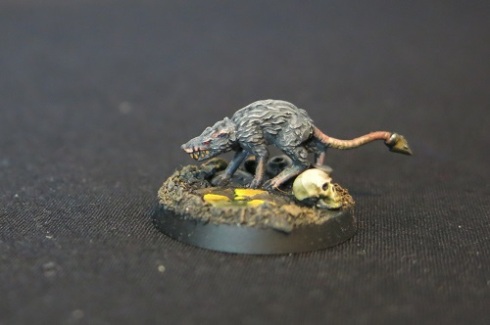 Finally this champion of the God-Emperor needed a bit of background to tie him into the evolving story of the Oathbones.

The first of Marrowkin’s Apostles to declare for the saint, Berthroc the Unworthy was once a champion of the Pithole Preachers. Swayed by the saint’s fiery sermons Berthroc demanded that the Preachers join his crusade and, when his gang leader refused, Berthroc responded by casting him headfirst into Pithole’s infamous pit. At this the rest of the Preachers turned on one another in a vicious schism, until finally Berthroc left taking his few surviving followers with him. His departure, and the fighting that preceded it, has left the Preachers sorely depleted. With the Pithole Goliaths already slaughtered at Korg’s feast the turf is seen by many as ripe for the taking although local hivers fear for just who might attempt to claim it – a concern which is in no way alleviated by the ominous chanting heard echoing up from the pit itself.

Meanwhile Berthroc seeks atonement for his failure to bring the Preachers wholly into the ranks of the crusade. In an act of penance he has donned an iron mask that prevents him from receiving food, water or even air, something he shall continue to wear until he receives a sign from the God Emperor Himself at he has been forgiven. To date no such sign has been received yet nor has Berthroc succumbed to starvation or asphyxiation despite the passage of many cycles. Whilst some have declared this to be a miracle others whisper that it is the result of a fraud, or perhaps even something darker. None dare to do so within Berthroc’s hearing however for his willingness to put friend and foe alike to the torch remains undiminished.

With him done the gang is starting to take shape, although I’ve got plenty more still to work on – so watch out for more gangers (and more rats) in the next week or so.

Like Loading...
This entry was posted on Thursday, June 18th, 2020 at 6:15 am and tagged with Cawdor, Necromunda, Rats, Warhammer 40k and posted in Necromunda. You can follow any responses to this entry through the RSS 2.0 feed.
« The Bloodied Knight
A Right Pile Of Potential »