The Chances Of Anything Coming From Mars… – Part 1

Before the outbreak of Coronavirus threw the world into turmoil Games Workshop announced that March would see the release of a range of new models for the Adeptus Mechanicus, those cybernetically enhanced sons and daughters of Mars (and other, inferior, forge worlds of course!). The spread of the virus has, naturally, knocked that release schedule back a bit but even before that happened I was suffering from mixed feelings about it. On the one hand I have a long standing love of the Adeptus Mechanicus, dating back to long before there was a range of models available for them, and more crazy-looking troops in service of the tech-priests can only be a good thing. On the other I’ve still never painted a single model from the range and it’s getting embarrassing!

Long ago I started to work on a test model for my first squad of Skitarii rangers, but about half-way through the painting process I stalled and somehow I never quite got back to it. I don’t quite understand what the issue is, I love the models, I love the background, I love the idea of painting them, but somehow the action of actually picking it up and moving the brush never seemed to happen. With the release of new models imminent I decided that this had gone on long enough, sat down and forced myself to finish it.

Now let me say first of all that I still love these miniatures, they’re amongst the best things that GW has produced and if I ever build an army in service to the Imperium (rather than one looking to smash it down) then these are the guys for me. However, god damn this was fiddly to paint! Working on him seemed to take me hours and the whole exercise became bogged down by frustration and irritation, not something conducive to getting the rest of the collection painted up. On the other hand I was feeling really pleased with the end result and enthusiastic about finishing some more – even if I wasn’t particularly eager about the actual painting stage itself.  I did have a second ranger assembled and undercoated however so I set myself the challenge of getting him painted as well – and not taking weeks and weeks to do it. In the end I cracked through him in perhaps an hour and a half or so, quickly enough that my enthusiasm didn’t abandon me along the way. 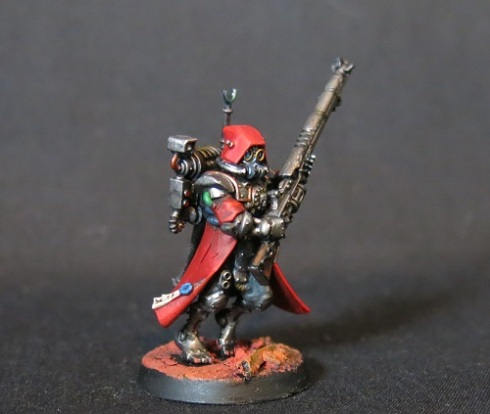 Side by side I think they look pretty good, certainly it’s not obvious which one was on the painting desk for several years and which one I rattled through in an afternoon. 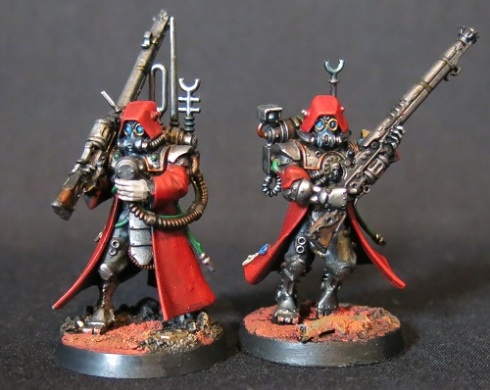 Oh and it goes without saying that these are perfect for the latest challenge being run by Ann’s Immaterium, the “Paint the Crap You Already Own” April Challenge. As a result of my longstanding love of the servants of Mars I bought myself a handful of models as soon as they were released, and continued to bolster their ranks every time I saw a good bargain in the years since. By now I’ve ended up with quite a backlog and between Ann’s challenge and GW pausing all new releases during the current pandemic the decision has been made for me – I need to paint the crap I already own rather than day-dreaming about the slew of potential new recruits which will sooner or later become available to the macroclades of the red planet.

Anyway, getting these done has fired me with enthusiasm and lifted aside a psychological block that’s been hanging over the project for quite some time. I don’t know when I’ll get back to working on this project but at last I can say I’ve painted something and hold my head high amongst the other tech-priests! Should the urge to paint more Skitarii strike me sooner rather than later I’ve even assembled a few more, ready for the brush as soon as a suitable opportunity arises.

I’m not sure exactly when I’ll tackle them, I’ve got a few other big projects I’m wanting to crack on with (my Necromunda Cawdor gang, more Blackstone Fortress, the rest of the Warcry terrain and chaotic beasts) but right now I’m just enjoying picking up loose odds and ends and getting them finished. Next up is likely to be some more Necromunda WIPs and then something Orc-y (and yes you read that right, Orc-y rather than Ork-y…).

Like Loading...
This entry was posted on Monday, April 20th, 2020 at 6:46 am and tagged with Adeptus Mechanicus, Skitarii, Warhammer 40k and posted in Adeptus Mechanicus. You can follow any responses to this entry through the RSS 2.0 feed.
« The Irondogs – Part 14
The Lodge of the Flayed King – Part 1 »