Just a quick tangent into something silly today. I was looking round for something mechanical to paint, preferably something which ties into one of my current projects, for Azazel’s Mechanovember challenge. Instead of picking something out of the half-finished pile however I spotted this Chaos Android – or if you prefer a proto-Necron – sitting in a box of models given to me by a friend a couple of years ago. He’s survived unpainted perfectly well for decades (the model not the friend) and he might well have continued to do so, but it struck me that he’d be quick and straightforwards and sure enough I bashed through painting him in the course of an evening, using only the odd spare moments whilst I waited for other things to dry (there’s only so much batch-painting of orks a man can stomach after all!). 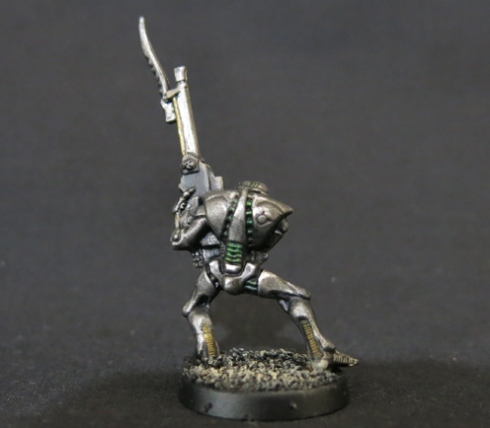 I won’t deny he’s a weird and ugly looking model, and the passage of years has not been kind to him, but there’s a certain nostalgia at play as well – I’m certainly glad he’s not going to have to endure another decade without paint!

Like Loading...
This entry was posted on Friday, November 8th, 2019 at 6:47 am and tagged with Chaos Android, Necron, Warhammer 40k and posted in Necrons. You can follow any responses to this entry through the RSS 2.0 feed.
« Touch Me I’m Sick – Part 1
The Irondogs – Part 13 »