I’ve been bumping my gums about my Necromunda chaos gang for absolutely ages and yet progress, when it has happened at all, has been bumpy to say the least. However with the ladies of House Escher wrapped up (for the moment) I decided it was time to get this bunch of crazy reprobates finished off as well. Once again Azazel’s monthly painting challenges proved their worth here. This month it’s “Squaddie September” with the aim of completing squads of at least three models, something which I used as a spur towards getting the gang finished up.

My affiliation with 41st millennium beastmen is hardly a secret and so I wasn’t going to miss the chance to sneak another one into the gang. As well as arming him with a gun I tried to make him a bit more “40k” by replacing his hooves with mechanical prosthetics, whilst his tentacle arm leaves him little hope of finding acceptance amongst upstanding Necromundan citizens and forces him to throw in his lot with the dark gods. 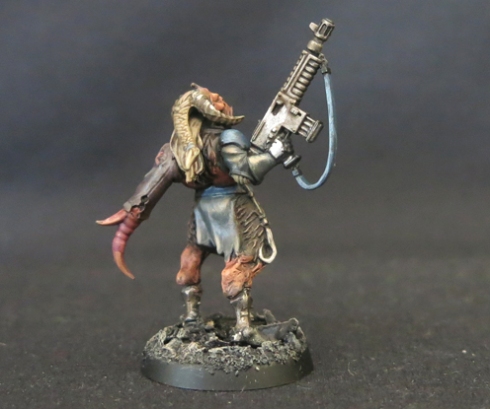 That said he’s not the only beastman in the gang, even the leader is one, so he should be in good company!

Alongside him I also completed this Tzeentchian cultist. I still have a plan to make a fully Tzeentchian gang at some point and although that may be a while off this chap brings us one step closer to seeing it realised.

As with several previous cultists he’s a conversion, continuing my determination to have as few duplicate models in my collection as possible. Here he is alongside the original. As you can see he’s not a radical conversion but the tweaks I made do, I feel, offer him a rather different (and distinctly more Tzeentchian) character.

What’s more the gang is starting to develop a little contingent of models dedicated to the Changer of Ways (although I have no doubt that they are completely ignorant regarding what exactly it is that they are worshipping). I blame the subtle influence of that sneaky fish myself…

Alongside these new recruits I also gave some attention to a couple of older miniatures that I thought deserved a second chance. First of all we have this despicable renegade, rescued from my old traitor guard collection and well overdue for some attention.

Meanwhile this was one of my favourite models from the Dark Vengeance boxset so I knew I had to include him somewhere. However he was also desperately in need of a repaint before he was ready to join his new crew.

I could have stopped there of course but I’ve been hearing the call of the dark gods a lot lately and I’m still working towards getting the contents of the Blackstone Fortress box painted up. Thus I decided to broaden my options for the gang and get some work done on Blackstone Fortress into the bargain by completing another of the traitor guard. Presumably this is a deserter from the Dust Wall who turned his coat when he saw the Genestealer Cultists coming. If they think they’re going to find refuge in Ironhouse they’ll be sorely disappointed! 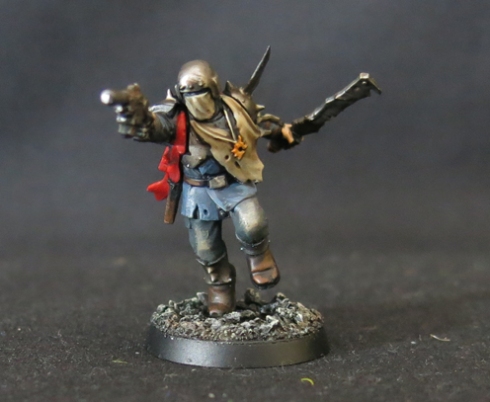 So, where does this leave the cult? Well, right now it looks a bit like this…

Much like the Escher gang I’ve got far more models here than one would really need to play a Chaos gang but it’s been a lot of fun coming up with ideas, building and painting them and that’s really all that I’m looking for.

Command of their activities falls to the bestial Skaverghast, accompanied by his champions and a powerful witch.

Then we have a small contingent of traitor guard, partly borrowed from Blackstone Fortress.

Not to mention the disorderly rabble of the rank and file.

And there we have them, another gang of reprobates ready to join the seedy and anarchic backstreets of the Underhive. Of course, like an army, no gang is ever truly finished. For one thing a lot of the new Blackstone Fortress cultists deserve to find a second home amongst this ragtag crew (when they’re not terrifying explorers and hunting for ancient xenos arechotech that is!)

Like Loading...
This entry was posted on Friday, September 6th, 2019 at 5:00 am and tagged with Blackstone Fortress, Chaos, Necromunda, Traitor Guard, Warhammer 40k and posted in Necromunda. You can follow any responses to this entry through the RSS 2.0 feed.
« Pollution of the Soul
War Eternal – Part 7 »