Don’t worry, I’ve not leaned over the edge and fallen off the world, or anything equally dramatic. It’s simply that this is the time of year when work is at its busiest and I end up spending most of my time outdoors with not a paintbrush or a miniature in sight. Which of course tends to reduce my output of painted models rather dramatically!

Of course I still have all kinds of hobby plans I’m wanting to pursue, but – after a rather productive April – it’s a safe bet that things will probably slow down a little over the next few weeks. Even when I do snatch some hobby time it’s not automatically the case that my creative energies – always a wilful beast at the best of times – will go in the direction I want them too. Thus once again the Eschers were left to languish whilst I found myself distracted by Ortruum 8-8, the bizarre psi-hound dispatched from Lord Helmawr’s secretive psykanarium to seek out those the lord of Necromunda deems undesirable.

It’s a weird beast this one, and not to everyone’s taste, although personally I love the fact that they were willing to create something so strange, ugly and utterly unlike anything else – either in the range or elsewhere. Plus, it was a fine opportunity to paint lots of unhealthy looking skin! 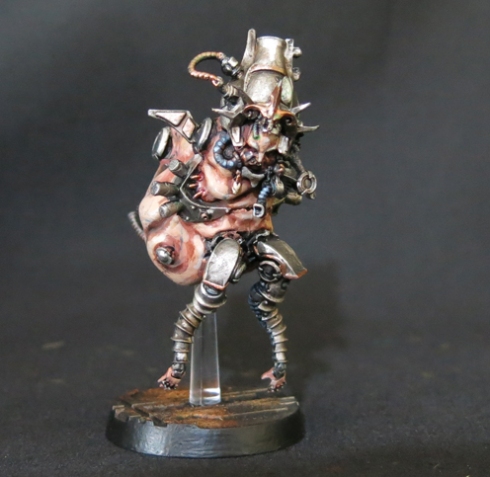 The little hands it uses (presumably) to feed and care for itself – in as much as it can – always struck me as particularly creepy and so, rather than paint them as mechanical (as on the studio model) I decided to go for living flesh instead. To me it emphasises the clinical, industrial cruelty of the 41st Millennium – why manufacture mechanical hands when literally everyone is walking around with two already attached. Plus, in comparison to the bloated bulk of the rest of the model they look oddly small and delicate (although, the more I look at him, the more I realise that as a pudgy, baby-like figure, barely cognisant of the enormous power it wields, which struggles to understand even basic concepts, has something ridiculous on the top of its head and is controlled by shadowy puppet-masters, it’s no surprise it has small hands as well…)

It’s worth noting as well that this is a big creature, it’s swollen, suspensor-borne flesh easily outsizing even the most muscular of Underhive locals. 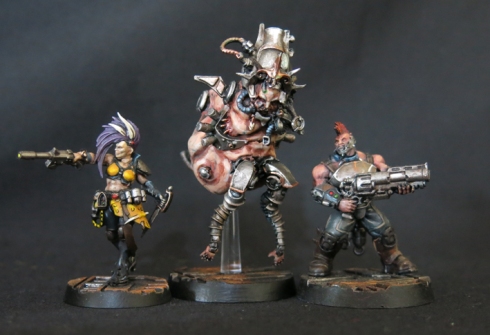 As mentioned above progress is likely to remain somewhat erratic for a while yet but hopefully that just means the creative fires will burn all the hotter when I do find the time to indulge them!

Like Loading...
This entry was posted on Monday, May 13th, 2019 at 6:21 am and tagged with Necromunda, Ortruum 8-8, Warhammer, Warhammer 40k and posted in Necromunda. You can follow any responses to this entry through the RSS 2.0 feed.
« Rat Race – April
Cursed In Eternity – Part 3 »