Ladies and gentlerats, it’s time once again to take a look at the progress of my Skaven collection this month. My plan is to get the army finished off (in as much as these things ever are) by the end of 2019 – barring GW releasing any new Skaven to replace some of the dodgy old sculpts marring the range (which at this stage looks doubtful to say the least). With that in mind it’s time I bashed on, progress has been rather slow over the first three months of the year and I’ve got a lot of ground to cover. Thus this month I turned my attention to the Stormvermin, the second squad of these elite rodents to join the army and frankly not my favourite miniatures to work on. Some people can make them look amazing once finished, and I feel I’ve done a fair job of them so far, but they really are exasperating models to work with – it takes a lot of work just to get them looking passable.

I showed the start of this squad last month and confessed that I was struggling somewhat with them. Originally I planned to painted the whole squad with white fur, distinguishing them from my other Stormvermin squad, which have brown fur, and marking them out as the elite guard of Grey Seer Murkskitter who accompanies the army and tries, often unsuccessfully, to make the clan obey the will of the distant Council of Thirteen, as opposed to their own verminous whims and schemes. I quickly found, however, that although painting the occasional rat with white fur is quite fun, doing a whole unit of them is an exercise in frustration, so I publicly called it off and declared that I would do the rest with brown fur, background be damned, don’t try and stop me! Several readers then made compelling arguments suggesting I shouldn’t be such a baby (albeit in rather friendlier terms), offering up advice and making the generally supportive noises that hobbyists make when one of their number is facing a challenge and not enjoying it. Amongst them Azazel – of Azazel’s Bitz Box – noted that this month he’s running “Armoured April” as a challenge, so whatever colour of fur I fancied painted it was a fine time to man up (rat up?) and get to work on them.

Cutting a long story short then I decided to take a swing at getting one of them done with white fur, then a second and slowly over the month they shuffled in, one pale furred rodent after another. After each I declared “I’ll just pack it in and do the next one with brown fur” and each time I sat down to paint it I talked myself into continuing. I’m not going to pretend it was entirely a joyful experience but there we have it, the halfway point has been passed and the finish line for the squad is now well within sight. 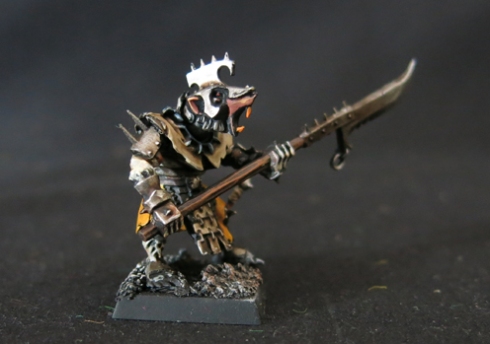 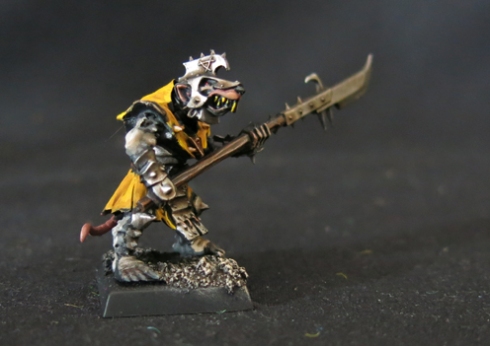 Of course these duplicitous rats need a leader, someone to point them in the right direction – even if that direction is often straight back to Skavenblight with their tails between their legs.

With these eight rats done we have enough for a full squad, and as I’ll probably take a bit of a break from them before adding any more, this makes for a good moment for a group shot or two.

The keen eyed will notice that, ranked up this way, one of the rats in the back rank appears to be attempting a quick spot of Skaven-style career progression by stabbing his boss in the ear. That’s the ratmen for you eh! Fear not however, once I add a few more (including a banner bearer and musician) I’ll try to find a way of arranging them that makes such skulduggery a little less obvious…

Like Loading...
This entry was posted on Tuesday, April 30th, 2019 at 5:58 am and tagged with Age of Sigmar, AoS, Skaven, Stormvermin, Warhammer and posted in Skaven. You can follow any responses to this entry through the RSS 2.0 feed.
« The Ladykillers – Part 12
Ortruum 8-8 »