I’m aware that I’m juggling projects a bit at the moment but I’ve been inspired to try and get my Blackstone Fortress set painted up as soon as possible. Part of the blame (or, more accurately, credit) for this decision has to be laid at the feet of KrautScientist, who has been busy painting up a full set of HeroQuest models – if you’ve not seen this work of art I highly recommend you check it out at once.

As mentioned back when I showed the Spindle Drones I have quite a lot of models kicking around which could stand in for some of the adversaries (traitor guard for instance are not in short supply!) so I’m starting off by trying to fill in the gaps where useful proxies aren’t easily available. Today it’s the turn of one of the most interesting heroes in the set; the Man of Iron UR-025.

Of course this model isn’t just wearing a suit of armour, it is a suit of armour and thus, to my mind, definitely counts towards Azazel’s Armoured April hobby challenge. 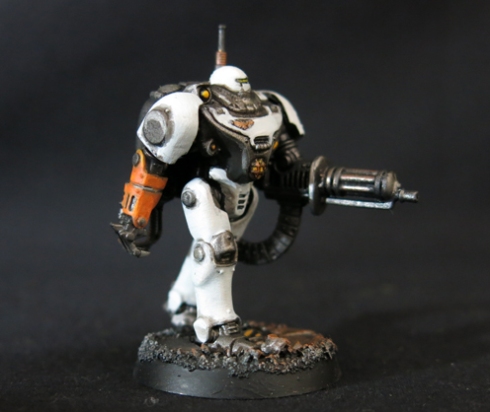 I’ve been curious about the Men of Iron ever since I first heard of them, tucked away in one of the little snippets of text that hint at pre-Imperial history in the 40k setting. We’ve only ever seen hints regarding them before although that in itself was enough to demonstrate how awe-inspiringly terrible they were in all their sun-quenching, planet-devouring might – and by extension how powerful the humans of the Dark Age of Technology must have been to have defeated them. Factor in that the Eldar of that era still regarded the humans as little more than animals scampering for scraps around their feet and we begin to see that, despite the Emperor’s best efforts, by the 40k era we truly are living in the twilight of the gods.

In the war with the Men of Iron we see that once again humanity ended up battling with the weapons that outgrew them, just as they would go on to do to the Thunder Warriors and Space Marine Legions. Those chapters still loyal to the Throne beware!

Then again, although one of the key narrative points of the 40k setting is the Imperium’s struggle to make do and mend, facing the horrors of the galaxy without access to the technologies they once possessed, what little we’ve seen of the Men of Iron at their height should be more than enough to confirm that some things really are best forgotten! 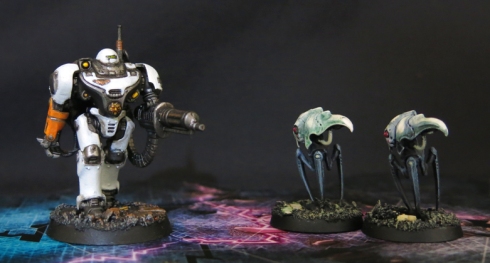 “War to the death should be instantly proclaimed against them. Every machine of every sort should be destroyed by the well-wisher of his species. Let there be no exceptions made, no quarter shown; let us at once go back to the primeval condition of the race.”

– Darwin Among The Machines, Samuel Butler

UR-025 isn’t about to single-handedly bring the Imperium to it’s knees of course (or is it?). It’s just a friendly robot, a survivor from a lost age, trying to make its way through a hostile galaxy, isn’t it? Wouldn’t that be a surprise for Abaddon and Guilliman alike if it managed to turn the Blackstone Fortress into a factory for making new Men of Iron and the galaxy fell, not to the daemons of the Warp or to a horde of hostile xenos, but to the return of humanity’s first spurned angels?

All that aside I think it’s very unlikely we’ll be seeing the Men of Iron return to the setting in a big way (although of course I may find myself eating my words). Rather I prefer them lurking in the corners, hidden by thousands of years of corrupted history or vanished off the edges of the map, into the dark spaces of the galaxy where human feet do not tread, where the lone survivor of a long ended war can live in peace, free from the depredations and paranoia of the species that spawned it.

“I am not a machine as you would understand, I am not a slave. I am not a thing. I am beyond and above you. I am a Man of Iron. And I am free.”

Like Loading...
This entry was posted on Thursday, April 11th, 2019 at 6:24 am and tagged with Blackstone Fortress, Men of Iron, Robot, UR-025, Warhammer 40k and posted in Blackstone Fortress. You can follow any responses to this entry through the RSS 2.0 feed.
« An Hour of Wolves and Shattered Shields
An Age of Chaos »