Despite having an inordinate number of miniatures in the house, all our games of Blackstone Fortress have so far featured a mix of unpainted models (the heroes) and various proxies (the villains). Traitor guardsmen and chaos marines are easy to come by on my shelves, and fantasy ghouls were pressed into service as ur-ghuls, but for the rest a more esoteric approach has been required. Rather than spindle drones drifting serenely through the corridors the first adversaries the explorers encountered were a small band of grots, presumably sent on a scavenging mission by their ork bosses.

Fun though the little blighters are however, and despite the space-gobbos have more in common with traditional dungeon dwelling baddies, I really wanted to get the real spindle drones painted up. To me they add a great deal to the atmosphere of the game, calling to mind the fact that this is a strange and incredibly ancient structure, constructed by enigmatic beings in a long lost and now unknowable age (although it’s probably a safe bet that in the grim darkness of the far past it was mostly war as well). They’re also quite beautiful models, often overlooked alongside fan-favourites like the long-awaited traitor guard or the showstopping cast of heroes, but wonderfully evocative nonetheless.

They’re also gloriously alien. There’s really nothing quite like them in the 41st Millennium (perhaps they’d fit in with the Eldar but even then it would be a stretch) – and indeed it was because of this lack of suitable proxies that I ended up using the aforementioned grots.

Anyway, for all of these reasons, I decided to tackle them first so that next time we play we’ll be able to do so with a bit more style. 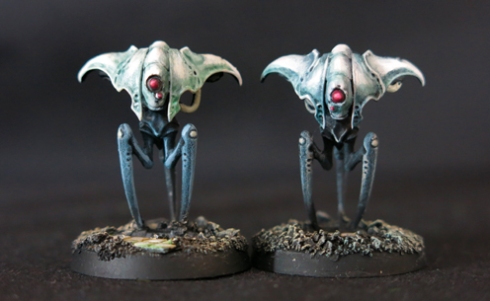 Normally I’d tend to steer away from having duplicate models in a collection (indeed regular readers will know this borders on being an obsession) but in this case I think the uniformity actually adds to the impression of anonymous worker drones (plus to tinker with them too much risked destroying the very qualities which drew them to me in the first place). I will however be trying to individualise the Ur-ghuls and traitor guardsmen when I get around to them.

As I was working on them I realised that these would actually qualify neatly for both halves of Azazel’s latest hobby challenge. This month it’s a two-part challenge – on the one hand we have “Squad: March!” (nothing complicated – just a case of finishing a squad in March), on the other it’s a gender-ambiguous model painting challenge. The idea apparently spun off from Fembruary (edit; not strictly true, as I’ve since been corrected – see Azazel’s comprehensive and interesting comment below or, better yet, click on the link above to see the original challenge in his own words), the annual event organised by Alex of Leadballoony which encourages hobbyists to add female miniatures to our male dominated collections. If you’ve not already seen it the gallery of this year’s contributors is well worth a look (not least because he gives a particular shout-out to this hairy heretic).

Essentially the gender-ambiguous half of this challenge therefore makes for a reappraising of the idea that miniature’s are automatically “male” unless proven otherwise (honestly I don’t think I ever made that assumption but it’s fun to play with nonetheless). That space marine? Definitely a bloke. Those Escher gangers? Women without a doubt. But what about those squigs or fleshhounds? Does a lady night goblin really look different to a male one under all those robes? Who knows what those ranks of skeletons looked like when they were fully fleshed?

Naturally these are just perfect for this, being as they are bio-mechanical alien robots. How they go about making new spindle-drones we can only guess – and sadly, this being the internet, someone probably has… (assuming they do and these creatures haven’t been drifting around the Blackstone Fortress for however many hundreds of thousands of years it’s been floating in space without replenishing their numbers). Of course this could be the perfect moment for me to sidetrack onto a long ramble about human-esque aliens in science fiction and how much it exasperates me (narrow budgets and limited costume department’s notwithstanding) when science fiction writers assume that species developing along an entirely separate evolutionary pathway, on a planet with very different environmental pressures, would naturally end up looking just like human’s with unusual foreheads. I’ve grown more relaxed about this over the years (at least in part because if you let it bother you then the range of sci-fi available to you narrows alarmingly) but it used to hack me off righteously I can tell you. Warhammer 40,000, of course, get’s away with it by giving science fiction a body-swerve and instead pitching itself as old fashioned fantasy in space (and anyone caught with a funny looking forehead is purged before they infest the entire planet with their deviant xenos creed!). However, rather than plunge any further down this particular rabbit hole, I’m off to rummage around for more aliens to paint (gender notwithstanding!).