Well, that didn’t go as planned! We all have commitments outside the hobby and sometimes they leap up and grab our attention and everything else, space wars and awesome miniatures especially, get flung to the winds. I tend to avoid talking about “real life” as much as possible on here, especially when it comes to my parent’s health. Ultimately they’re very private people, and this is intended as a hobby blog rather than a look at my daily life (who’d want to read that?!), so I’ve done my best to steer around it unless it has a big impact on the content I’m producing. Suffice to say that back in 2017 they were the victims of a serious road accident (a polite way of saying a careless arsehole drove his car into them) which has left both of them seriously disabled. Last week my father’s health took a turn for the worse and so I dropped everything and jumped onto a plane, leaving half-painted miniatures scattered in my wake. The good news is he’s now on the mend again, a huge relief for my mum and I, and I can take a moment to appraise my painting and kick the engines of this blog back into some semblance of life.

I had several things planned for the end of Feb which have fallen by the wayside but I’ll aim to pick up where I left off and get them done soon. The Khorne Slaughterpriest is tantalisingly close to being finished (don’t tell him though – the word “tantalising” must sound disgustingly Slaaneshi to his ears!) so I’ll get him wrapped up first. I also had various models planned for Fembruary, especially the addition of more Escher gangers, all of which will get their moment soon.

Most striking of all this marks the first time since January 2017 that I haven’t managed to add something to my Skaven army. Perhaps I should be cursing the fates that my 25 month streak has come to an end but honestly I’m pretty damn pleased that I managed a 25 month streak in the first place. All being well, normal ratty-service will resume this month.

The one thing I did manage to get finished before I went hurtling out the door was my long promised Escher champion armed with a chem-thrower. 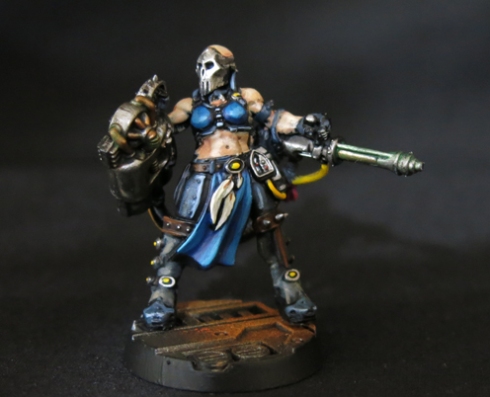 When I first started working on my Escher gang I found myself thinking a lot about the chem thrower. Here we have an iconic Escher weapon combining their love of cruel and remorseless destruction with a showy and flamboyant style. Fill a narrow corridor full of your enemies with flesh-eating gas and no one will forget that the house is not to be trifled with. Moreover it struck me that anyone who actually wielded such a weapon would need to be a particularly cold and vicious example of her kind, distant and ruthless amid the camaraderie of the wider sisterhood. Thus Isadora was born.

I didn’t want to go too crazy with bright colours, to emphasise her otherness and grim nature, but she’s still an Escher so a few spots of that are a little more garish helped to tie her in with the rest of the gang.

With her joining their ranks the Escher gang is now starting to show the strength of numbers and versatility they’d previously lacked, although there are a few more models I’d still like to add – most notably gang leader Gallows Grace.

Of course, all of these Eschers also count towards Fembruary, a community challenge event aimed at encouraging hobbyists to diversify the range of heroes and villains in our collections beyond the predominance of our collective comfort zone amid the massed ranks of muscular men. Originally, in a classic case of my ambitions outweighing the practicalities, I intended to get a lot more ladies painted here – everyone from Elucia Vhane and Sanistasia Minst to the Infernal Enrapturess and Kria the Huntress were originally pencilled into the list. Alas there are still only so many hours in the day and, despite my devotion to the genestealer cults, I only have one pair of hands, so my ambitious list was cut down somewhat by reality. Nonetheless I’m pleased to have finished this little lot, especially under the circumstances.

What’s more I’ve been continuing to follow the great motivator and hobby institution that is Azazel’s monthly challenges. February was a combination of terrain (somewhere I could use with getting more done but alas, on this occasion, did not) and neglected models (those miniatures which were purchased some time ago – more than six months is generally regarded as the minimum ballpark – but which have stubbornly remained unpainted). Again I had all kinds of plans here, incorporating both the aforementioned Skaven and Slaughterpriest, alongside the Sloppity Bilepiper who has been dancing unashamedly in nothing but a basecoat for over a year and the Tiger of Dirz from Confrontation, which has been kicking around for over a decade and which I plan to use as a Khimerix for the Eschers. None of those actually made it of course but at least these four Eschers definitely count. 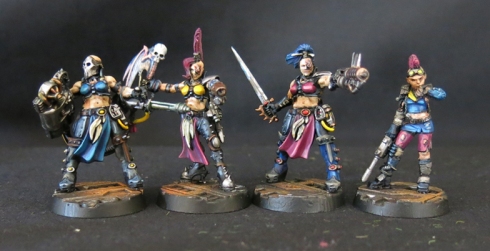 Having been away from home and work for a week I’ve got all kinds of things to catch up on, and once again miniatures are forced to take a backseat whilst I catch up with everything else. Nonetheless I have, as ever, got lots of things planned, so their time will come – just as soon as I get the rest of my life under control!

Like Loading...
This entry was posted on Monday, March 4th, 2019 at 6:30 am and tagged with Escher, Fembruary, Necromunda, Warhammer, Warhammer 40k and posted in Necromunda. You can follow any responses to this entry through the RSS 2.0 feed.
« Dance of Death
War Eternal – Part 3 »