Did I not promise you more poxwalkers just a week ago? Am I not a corpse master of my word? Here’s the latest two shamblers to come lurching off the painting desk.

I experimented quite a lot with this one, mixing some of the agrellan earth texture paint in with flesh tones to cover some of the rougher joins. I actually finished him off about a week ago but I found myself really unhappy with the results. Although he was technically pretty much perfect the results were much too “clean” for my liking (by which I mean painted with precision, he still looked like a filthy rotten git). In the end I took him back to the painting desk and worked over him, he’s muckier now but I’m much happier with the end result.

His new pal here is converted from the poxwalker in the lab coat. 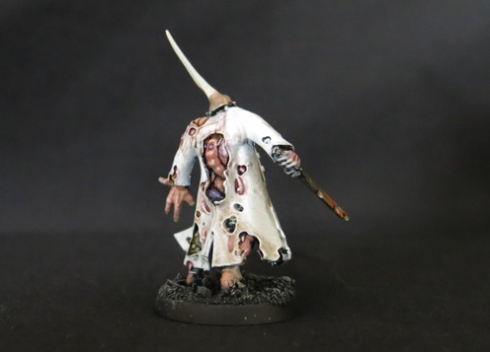 Unlike the previous lab coat wearing poxwalker I painted I didn’t use lots of blood splatter here, but instead tried to make the coat look stained and befouled by decomposition. By way of comparison here he is next to his gore covered colleague. 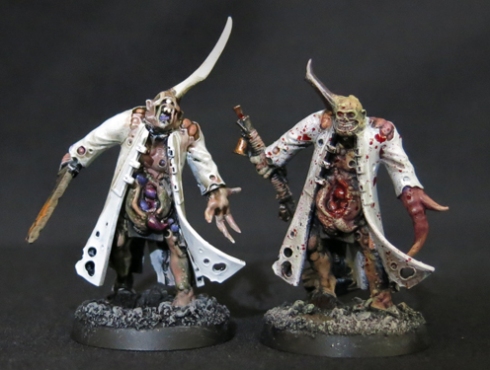 Of course without getting too graphic it’s clear that his guts have exploded quite violently at some point, which presumably means he wasn’t wearing the lab coat at the time. It builds a somewhat macabre image, in my mind at least, of him, already long dead, taking his coat from its hook and, in a reverse of his habits in life, putting it on before he shambled out of the lab for the final time.

Like Loading...
This entry was posted on Wednesday, January 16th, 2019 at 6:50 am and tagged with 40k, Chaos, Conversion, Death Guard, Nurgle, Poxwalker, Undead, Warhammer 40k, Zombie and posted in Death Guard, Nurgle. You can follow any responses to this entry through the RSS 2.0 feed.
« The Ladykillers – Part 4
Squabblin’ Goblins – Part 11 »