I know I’m supposed to be concentrating on goblins but sometimes an idea comes to mind that’s just too cool to resist. Down in the Underhive respect is a matter of life and death. A gang boss who is not feared will soon find their career ended on the knives of their rivals or underlings. An enforcer who is both loyal and savage, and who can be relied upon to impose order and inspire fear in equal measure is worth all the creds in the Spire.

Meet “Bloodbath” Bosrak, a former ganger turned champion pit-fighter and now convinced to return to the mean streets and rubble-strewn tunnels of the Underhive where he serves as the savage enforcer sent in by the Irondogs when a problem can only be solved by an extreme display of violence. 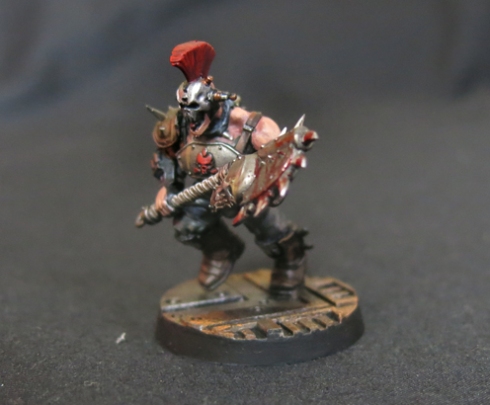 I wasn’t really intending to tackle the champions for my Goliaths yet, planning instead to finish off the rank and file first, but it seemed foolish to stand in the way of creative inspiration. Plus the chance to make use of one of the heads from the new Gellerpox models as soon as I saw it was too exciting to pass up! Here’s Bosrak leading the boys into action to stamp their authority on the hab-shanties and crumbling domes of Sumpside.

Working on Bosrak has given my enthusiasm for the project a real boost so the rest of the gang will get their turn on the painting desk soon, but before that I really do need to concentrate on the gobbos…