My plan to make some truescale space marines dates back roughly a year now, to the release of Dark Imperium, the arrival of the Primaris Marines and their crude shoehorning into the background. Suddenly truescale marines could be build without all the blood, sweat and tears that it used to involve. No more carefully inserted spacers or hacked up primarchs, proper space marines for the masses have arrived! Naturally I tore open my copy of Dark Imperium, starting frantically assembling and then… stalled. My enthusiasm for the project remained high but somehow I never quite got around to actually painting anything. I poured over possible chapters, I worked out potential colour schemes but my models remained stubbornly grey and unlovely. Then, quite by chance, the gears of fate began to grind into motion once more.

It started when I was looking at KrautScientist’s awesome truescale Deathwatch. Once again I found myself looking at my own Astartes and tragically unpainted state. Picking up the test model I’d been using to explore my latest colour-scheme idea I realised he was a)almost finished and b)I liked the way he was looking. A little more work and he’d be done and sure enough after another quarter of an hour here he is. The first of the Knights Mortis is ready to serve his Emperor 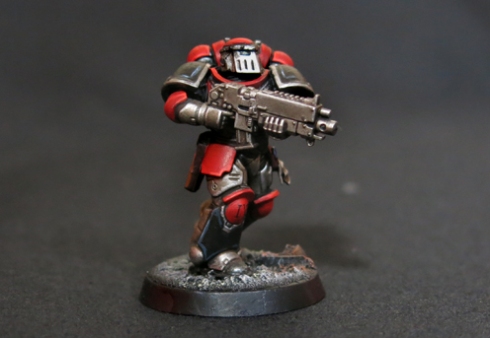 Of course there’s a galaxy full of xenos and heretics out there and no hero should stand against them alone. With the righteous enthusiasm of the God-Emperor burning in my veins I set brush to model and painted another one.

At this point I may have become a little carried away. After all, I thought, I only need to paint three more models to make a unit. Azazel’s Junit challenge began to whisper to me in the back of my mind. Now every space marine knows that a whispering voice that no-one else hears is more often the temptations of hungering gods than the righteous voice of Him Who Is On Terra but I’ve flirted with Chaos long enough that I’m willing to take my chances. Three more battle-brothers by the end of the month? Let’s give it a shot shall we?

Like Loading...
This entry was posted on Monday, June 18th, 2018 at 5:46 am and tagged with Space Marines, Truescale, Warhammer 40k and posted in Space Marines. You can follow any responses to this entry through the RSS 2.0 feed.
« Soul Survivors
Garage Days Revisited – Part 2 »