Recently I received a gift from a friend, a box of miniatures which he’d been given by a friend of his. Apparently when my friend was helping his friend clear out his garage they’d uncovered the models, neglected and filthy, on the floor (I wasn’t there of course so I may be misrepresenting what happened – they may have been clean and on a shelf for all I know but where’s the harm in a little dramatic licence?). The owner of the garage (and the miniatures) didn’t want them (the miniatures – I think he kept the garage, I’m slightly hazy on that part) so donated them to my friend, who passed them on to me. It’s a nice little pick-and-mix of old models and you can expect to see them appearing on the blog over the coming months as I get around to painting them, but to begin with there are a few that have jumped the queue by insinuating themselves into upcoming or existing projects. First of all we have this vampire, who’ll be joining the ranks of the undead I painted last year. 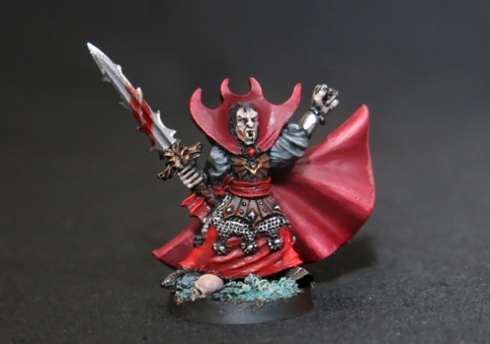 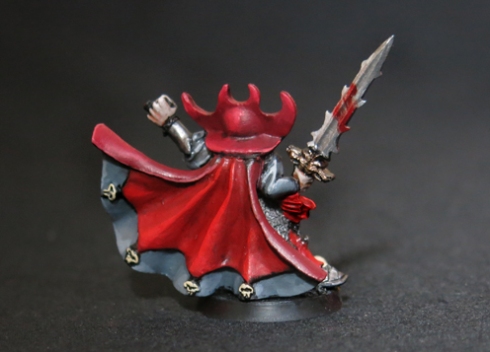 I’ve been fond of this model for a very long time but never managed to pick one up so it was amazing to open the box and find him lurking inside. Painting him turned out to be a lot of fun and getting to play around with two different reds on the one model made me feel quite arty. 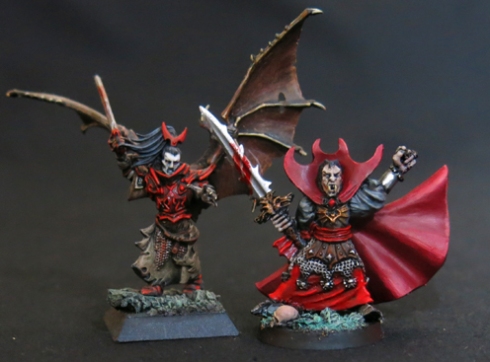 If you’re reading this then a big thanks to Tom’s mate (whoever you are) and my apologies if I have met you or do know your name and have just forgotten. Hopefully whatever you were doing with your garage has worked out as you intended – at least your old models have found their way to a loving home.

Meanwhile the keen eyed among you will have spotted that he’s on a round base. Could it be the start of something? At this stage, who can say?

Like Loading...
This entry was posted on Friday, June 15th, 2018 at 5:48 am and tagged with Age of Sigmar, Legions Of Nagash, Undead, Undead, Vampire, Warhammer and posted in Undead. You can follow any responses to this entry through the RSS 2.0 feed.
« Rodents Of Unusual Size – June Part 1
Soul Survivors »