A quick interruption to the theme of Neglected Models today, but I had so much fun making Gor Halfhorn, and the model was so well received, that I decided to try my hand at making my own version of Grendl Grendlsen. As with Gor I’m actually quite taken with the official model but there’s no way I can afford all of the Necromunda heroes that I like the look of, and as I have the bits to make Grendl available I decided to give it a shot.

Gor has a lot of characteristics that make him stand out, characteristics which can then be played upon to make a kitbash that is recognisably him. Grendl on the other hand is pretty much a generic squat – the excitement comes from the fact that he’s a squat at all, particularly in an era when the term is associated more with a race being canned than with the space dwarves themselves. Needless to say this made the task of recreating him that much harder as there were fewer obvious traits to copy. Here’s how he looked on the first attempt.

Overall there’s nothing especially wrong with him but I still wasn’t terribly happy. He may have Grendl’s gear but he still just looks like a generic squat, plus the way he’s holding his weapons blocks his face from in front, making him look defensive and weak rather than bold and strong. Time to try making a few adjustments, including making a head that’s more reminiscent of the official Grendl. Of course this did involve cutting two tiny heads in half and splicing them together, undoubtedly the hobby activity most likely to wrack my nerves and bring me out in a cold sweat. 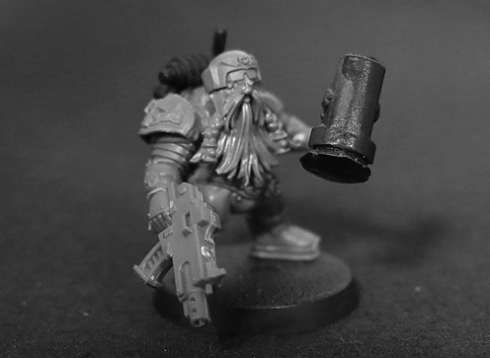 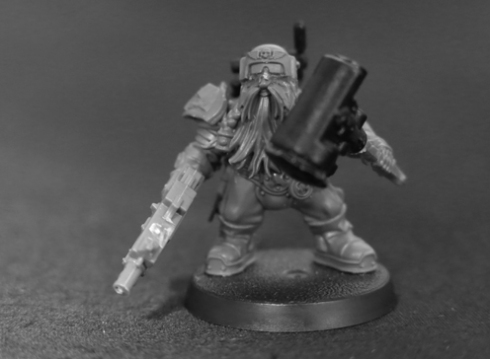 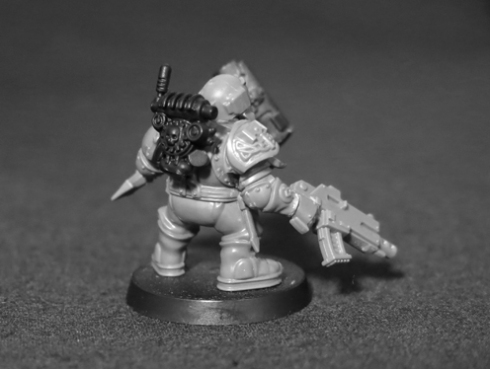 Before becoming trapped on Necromunda following the assassination of his liege, the Rogue Trader Constant Gerrit,  Grendl was a banner-jarl of the Vega Rams mercenary company. Having spliced on the new helmet I was intending to shave off the Imperial Guard insignia but, after consideration, decided to leave it as a nice visual reference to his heritage amongst the soldiers of the Imperium. 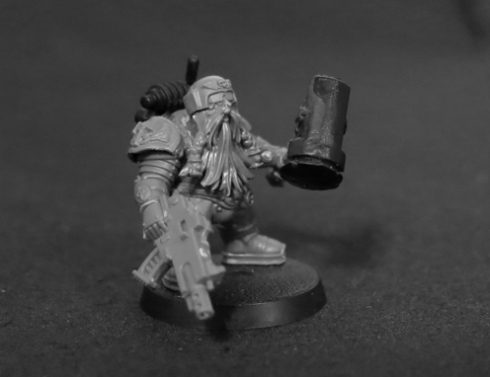 I feel this second version is definitely an improvement, although I may still make a few more tweaks before I paint him so if you have any feedback I’m all ears.