It’s been a week since my bold assertion that I would paint a bloat-drone in the month of October and the question on everyone’s lips is; how much have I managed? For the uninitiated October has come to mean Dreadtober as hobbyists attempt to get their unloved Dreadnaughts finished before the start of November. Anything of roughly dreadnaught-sized proportions is welcome, with carnifexs, dreadknights, helbrutes and – in my case at least – bloat-drones all welcome. If you have a dreadnaught shoved to one corner of your painting desk it’s not too late – this could be its moment.

I’ll confess that much as I enjoy Dreadtober I actually hate posting WIP images of part-painted models, especially when they’re frozen in the moment when the first basecoats have been applied but the washes are still waiting in the wings and the whole model is a shoddy mess of flat panels and ugly colours. Nonetheless regular progress updates are very much in the Dreadtober spirit so I shall grit my teeth and reveal the current state of the bloat-drone to the world. 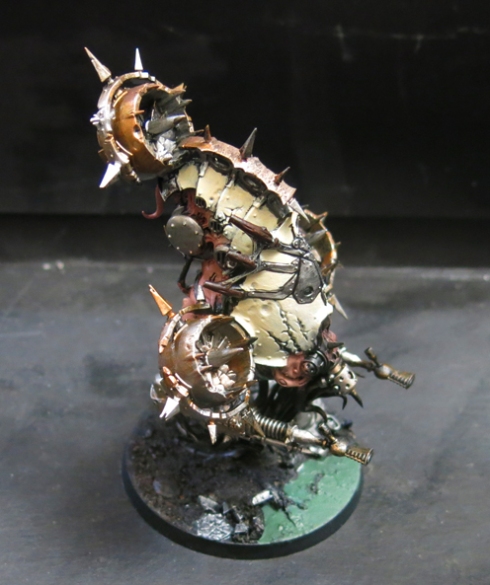 As you can see it’s not looking its best yet but you can’t pretend I didn’t forewarn you of that!

The khornate helbrute, originally painted for the 2015 Dreadtober, is also at a less than prepossessing stage, its flaying arms repaired and – hopefully – upgraded with garish lumps of greenstuff (hence the black and white image).

Still lots to be done before the end of the month then but progress is underway at least.

Like Loading...
This entry was posted on Friday, October 13th, 2017 at 3:32 am and tagged with #DreadTober, 40k, Bloat-Drone, Chaos, Chaos Space Marines, Conversion, Death Guard, Dreadnaught, Helbrute, Nurgle, Warhammer, WIP and posted in Death Guard, Nurgle. You can follow any responses to this entry through the RSS 2.0 feed.
« The Emperor’s Angels – Part 1
The Doctor Is In »