When I first saw the Malignant Plaguecaster I felt a profound sense of disappointment. Here was a model raised from the same series of models, the same Nurgly aesthetic as such masterpieces as the Plaguebearers, the Glotkin and Maggoth lords, the gleefully tumbling Nurglings and the excellent new Plague Marines, yet which owed next to nothing to any of them. Where we could have had a powerful plague-wielding wizard in crumbling power armour, or a mutant monstrosity bursting from his corroding exo-skeletal suit as the warp boils him into something daemonic, instead we have a cartoony pile-up of over-the-top ideas, each brazenly competing with the last into a muddled, messy let down. Here’s a reminder of how cluttered he looks when assembled as intended.

That said, I wasn’t going to let a lump of plastic beat me without a fight. After all the concept of a ten-millennia old disease-infested mage-warrior remains powerful and inspiring, even if the official execution turned out to be distinctly disappointing. Given sufficient consideration and effort (or possibly blood, sweat and tears) I was determined to transform the Plaguecaster into a model I could be proud of.

The Plaguecaster however turned out to be a wily old beast and fought back against my attempts to convert him. As soon as I started to assemble him I realised that this would not be as simple as a straightforward head- and arm-swap. The long tastles which had at first annoyed me, turned out to be an intrinsic component of the kit, covering up the join between the distended guts and the outreached arms.

Those wanting to convert this model without the tassels face a gruelling battle with the greenstuff to fill all those gaps. I won’t deny that this may have inspired my change of heart as, in spite of my initial reticence, I found myself willing to accept the tassels as part of the finished piece. Time to concentrate on the other changes that needed to be made; removing the silly staff, the fart hand, the podgy little head and the flywing cape, and adding in suitable replacements. 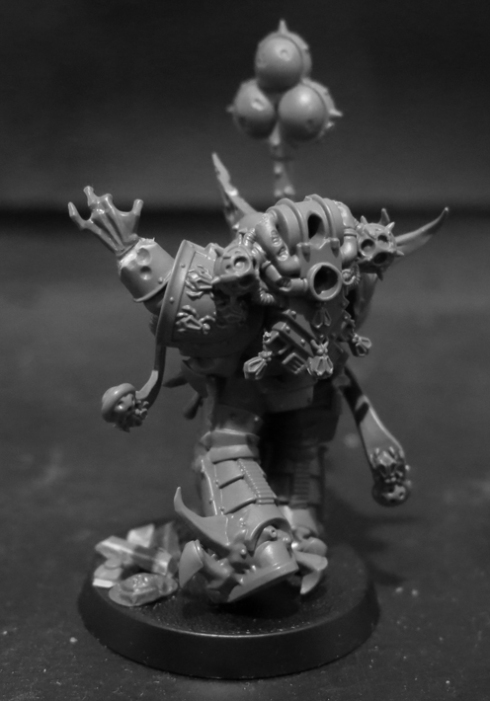 The plugs where the flycape should sit still need to be greenstuffed over.

As an aside it appears, judging by the information that I’ve seen circulated online, that the Death Guard codex will contain rules for both chaos sorcerers (with or without terminator armour) and plaguecasters. Yet surely the plaguecaster model is just that, a sorcerer with the mark of Nurgle? The fiction describes them as being one of several classes of sorcerer within the ranks of the Death Guard (alongside the Festering Poxshamans, the Faminbringers and the Maggotmancers) but surely, unless GW plans to release models and rules for some of these other classes in the relatively near future (and let’s be honest here, awesome though that would be it’s not likely) then surely the concept of the plaguecasters would have been better kept as a cool nugget of inspiration in the background, and the model released just as a good old-fashioned Nurgle sorcerer?

Some will say that the new naming conventions of the modern GW are simply a way of protecting their intellectual property but really the names are just labels, convenient handles to hang on things to facilitate communication. Is there really anyone out there who thought the Eldar were rubbish and swore never to purchase a single aspect warrior, but is gleefully overexcited by the arrival of the Aeldari? Didn’t old Shakespeare say something like “An Ork by any other name would smell like feet”? Or was that an Orruk?

Anyway, I’m getting sidetracked now, but if anyone out there has the Death Guard codex and wants to tell me if there’s a material difference between a plaguecaster and a normal chaos sorcerer with the mark of Nurgle that justifies having both of them in the same book then please speak up. Otherwise any feedback you have on this tainted son of Nurgle before he sees some paint would, as ever, be very welcome.

Like Loading...
This entry was posted on Tuesday, September 19th, 2017 at 5:00 am and tagged with 40k, Chaos, Chaos Space Marine, Conversion, Death Guard, Malignant Plaguecaster, Nurgle, Warhammer, WIP and posted in Death Guard, Nurgle. You can follow any responses to this entry through the RSS 2.0 feed.
« Ostium Guides – Part 2
Our Rage Won’t Die – Part 1 »