After finishing off my undead I started fishing around for something to follow them with, a pallet cleanser if you will, before getting back to Chaos and my slowly progressing warband for the Chapel. My hand fell on this distinctly Oldhammer Ork, a gift – alongside quite a number of other models – from a friend who was having a clear out. 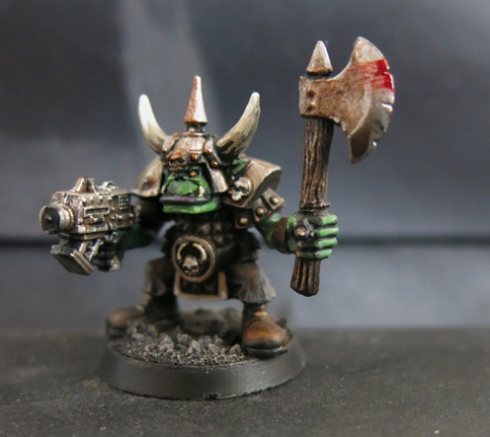 In spite of being a distinctly elderly model I wanted to paint him in a modern, grubby style, rather than the flatter, more garish tones preferred back when he was first released. I reckon it works well, and of course it ties him in nicely with his newer battle-bruvas.

Of course he’s a little shorter than his new mates but there’s no need to take the mick out of him for it eh!