Lurking in the same box as Queek were these two Ork Kommandos. I built them a few years ago now, as part of a plan to build a full squad of “stelf orkz”, a plan which sadly withered on the vine before it reached completion. Still, there’s no need for these two to lurk any longer, for now they can hang out with the rest of the boys.

As is often the case with old models that’s a few things about the paintwork that I’m less than happy about but never mind, I don’t have the time (or the inclination for that matter) to go back and start re-working them right now. Also, although I’m rather pleased with how the dusty bone of the first ones’ axe looks in real life I’m struggling, and failing, to take photos that do it justice.

The gasmask is also not my best work but again it’s worth remembering that I made it several years ago when greenstuff was still a very new and unfamiliar medium to me. Still, it’s not so awful that I’m feeling compelled to decapitate him and provide him with a new head.

I also have quite a few of the bone weapons from the feral orcs (that’s bonesplitterz to you kids) lying around so at some point I may make a few more “Snakebite-y” Ork boyz and, once I’ve dealt with the billion other projects that I’ve got planned, I may even return to my Kommandos. 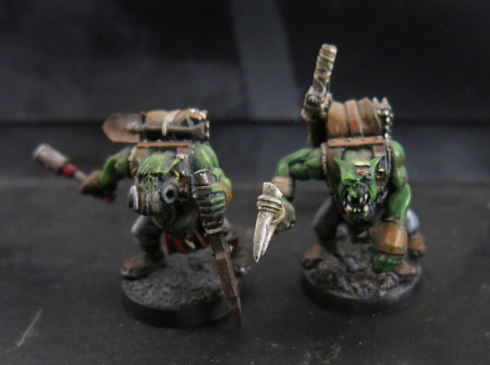 Like Loading...
This entry was posted on Tuesday, April 4th, 2017 at 6:42 am and tagged with 40k, Conversion, Ork, Ork Kommandos, Wargaming, Warhammer and posted in Orks. You can follow any responses to this entry through the RSS 2.0 feed.
« The Bane of the Bearded
Reinventing Chaos – Part 1 »