Inquisitor Morix has devoted a lifetime to his Ordo’s cause and the weight of his years is an iron chain upon his neck. The whispers that reach him from his superiors on Terra tell of a terrible darkness gathering; of the dead going unburied across a thousand systems, of tomb worlds lost to the ruinous forces of the alien, of a terrible act of necromancy that seeks to raise a Primarch from his Emperor-given rest. His duty, however, lies elsewhere. Spirits are abroad within the occluded world of the Chapel, making havoc where there should be order. A ghost has no place spreading mayhem or disturbing the work of the living. The reward for a lifetime of righteous toil is the Emperor’s Peace – and those who reject such a boon must be purged!

Right, here we are at last – a WIP model of Inquisitor Morix of the Ordo Mors, preparing himself for his journey to the Chapel. He’s still just tacked together at the moment, the big gaps under his armpits will need filled and there’s still some other greenstuff work to do, plus various inquisitorial widgets and flourishes to add. As ever however feedback is really appreciated, I want this warband to look the best it can so if you have any thoughts or suggestions I want to hear them. Do keep in mind though that some bits are still only tacked on (so for example in some of the pictures the head sits further back than intended – minor tweaks like this will be fixed as he’s finally stuck together). 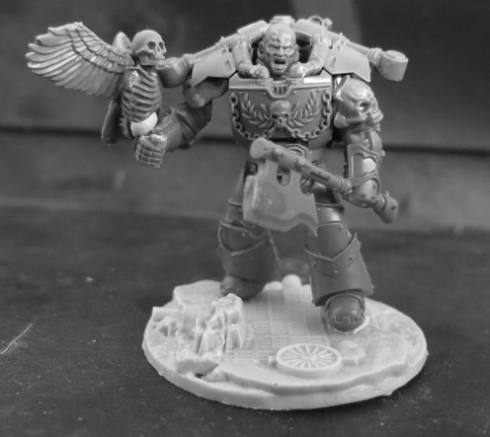 I toyed with the idea of giving him a scythe but discarded it as it seemed a little clichéd (just because Death is often portrayed wielding farming implements doesn’t mean everyone has to join in). Instead I thought an axe served to reinforce the idea that he is an executioner, dispelling judgment upon those who disrupt the Emperor’s peace regardless of whether they are living or dead. Death does not unburden the guilty!

For the model itself I was keen to have him clad in power-armour, after all what venerable inquisitor wouldn’t want the best that money (or raw authority) can buy when it comes to protecting himself on the battlefield. On the other hand I didn’t want him to read too much as a space marine; partly for aesthetic reasons and partly on the assumption that their armour relies on all kinds of internal modifications linked to all the astartes organs, and simply wouldn’t work for an unmodified human.

Thanks to Black Earth for the base. Now get that feedback off your chest and let’s see if we can improve him!

Like Loading...
This entry was posted on Tuesday, March 21st, 2017 at 7:22 am and tagged with 40k, Conversion, Inq28, Inquisitor, Ordo Mors, The Chapel, Wargaming and posted in Inq28. You can follow any responses to this entry through the RSS 2.0 feed.
« Ghosts of the Chapel
Witch In Progress »

21 responses to “Inquisitor Morix – The Beginning”