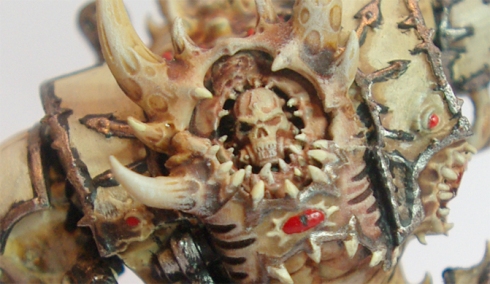 The blade itself incites to deeds of violence – Homer (not Simpson – the Greek one).

A beast of ill-contained rage and terrible strength, the Helbrute known as the Ironghast Fury was sent to Kell as a gift from the masters of that terrible hell-foundry. The reasons behind this action however, remain unknown. Was it intended merely to secure ties and future tribute from his warband, or to encourage him to abandon other gods and devote his service to Khorne alone? Or does it serve a more subtle purpose as the weapon by which this errant chaos lord might be destroyed? After all who could contain such violence as this creature seeks? Perhaps the mere possession of such a weapon would tempt its wielder to seek war on such a scale that, in the end, he too shall be dragged down into destruction and defeat.

Whew! With October (and more importantly DreadTober) almost over my converted Helbrute is finished – and with only a minimum of late nights needed to work on him. Here’s how he looked earlier in the week. As you can see the metalwork was started but the whole model was still looking rather unfinished. 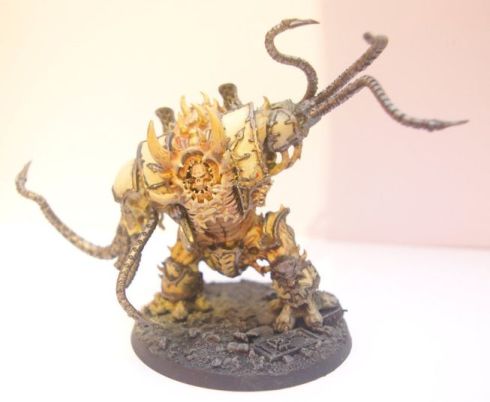 And here he is now:

I’m not quite sure what possessed me to make the spine quite so hideous – my logic was that with all those tentacles flaying around it would be putting terrible pressure on the anatomy of a creature that is, after all, not the result of natural evolution but instead produced by random growth. Don’t feel sorry for it though – it’s a monster!

I know it’s subtle but I’m rather pleased with this little detail on the base. Take that Blood Angels – you think your Dreadnaughts are angry?!

By the way, for those who’ve not read the Khorne Daemonkin book quite as nerdishly as I have, the Ironghast Foundry is official cannon, a whole planet given over to producing weapons for Khorne’s armies (put that in your pipe and smoke it Skullgrinder!) Sadly the description becomes rather melodramatic even by GW’s standards (boiling blood and murderous skull covered machinery everywhere), and their imaginations ran out entirely when it came to the man in charge – a ‘cruel and violent’ character (no-one expected him to be easy-going and jolly) known only as ‘The Overseer’. Leaving that aside however I rather like the idea of a massive Khornate forge (the name Ironghast just sounds mean doesn’t it?) and wanted to sneak a reference in to my own collection somewhere. Now hopefully by the time they get round to making another edition of Khorne Daemonkin the Overseer will have fallen beneath the bone pistons of his own horrific engines and been replaced by someone a little more nuanced.

Anyway, moving on I’d also like to add that DreadTober is the first event of its kind that I’ve ever taken part in and it’s been a hugely enjoyable experience. Not only has it encouraged me to get this Helbrute finished (saving it from another year sat in dusty shame on the painting desk) but it’s also been a great opportunity to see other people tackling similar subjects. Once again then I’d encourage anyone who hasn’t already favourite the main site to get over there and have a look.
Also, in disgustingly clichéd Oscar-winner style, I’d like to offer a quick thank you to Greggles and everyone else who made DreadTober happen, and to everyone who got involved. It made it a far more exciting thing to be part of than had I simply challenged myself, and the outpouring of creativity from the other participants was extremely inspiring and motivating. So cheers guys, and if anything like this happens again I’ll be sure to join in if I can.