Anarchy Shall Be This Age’s King

To my mind traitor guard – that is to say rebel Imperial Guard regiments – are as much a part of Chaos in the 41st Millennium as daemons or Chaos Marines. Sure, the Chaos Marines can inflict a lot of damage by themselves and when it comes to teleporting into an Imperial Governor’s palace and butchering the command staff or cracking open a Mechanicum void-station in hard vacuum, why they’re the very men for the job. However, if one has launched a full scale Black Crusade there’s simply no way one can do all the killing by one’s self (no matter how much one might want to – followers of Khorne I’m looking at you here). Summoning great armies of daemons is always useful of course, although they strike me as being somewhat flaky allies, prone to sudden acts of mad treachery when you suddenly discover you were simply a pawn in the great game and their actual aim was to conjure up a great cathedral of crystal and sorrow or something equally weird. Almost as bad one can conjure up a whole legion of them, only for the whole lot to be banished screaming back into the warp by an elderly inquisitor who knows their master’s real name. Not to say they aren’t useful but sometimes the situation calls for boots on the ground, and when it comes to trudging through trench-lines and being massacred by the thousand no-one does it better than the Guard.

Thus once a Chaos force reaches a certain size a regiment of traitor guard seems like a natural progression. This is no longer a piratical strike-force but a campaigning, crusading army. It has outgrown looting for petty gain or ransacking cities in the name of the Gods. Now they’re properly empire-building. Imperial worlds burn in their wake. Just as the Imperium isn’t all about the Space Marines but relies on vast armies of common soldiers to do the bulk of the work, so too must their dark opponents turn to the ranks of cannon fodder to be in all the places that they cannot.

I’ve been plotting to muster a horde (or at least a few) traitor guardsmen of my own for a while and at last I’ve got round to painting a few. 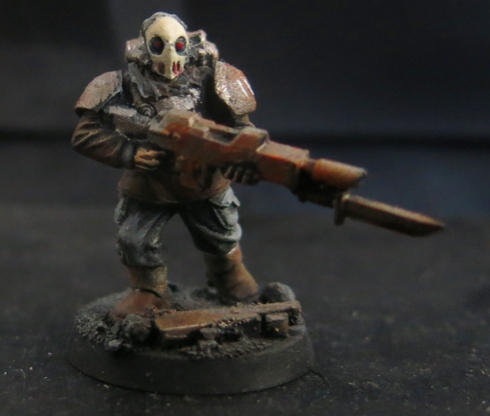 When I started I was planning to base this collection round a mixture of the Imperial Guard (later Astra Militarum) codex, plus units from the Siege of Vrax books. Then along came Imperial Armour 13 and, having finally got a look at it recently, I liked what I saw enough to make it the cornerstone of the force instead.
I built these next two traitors before I saw IA13, and originally planned them to be part of a special weapons squads, but I reckon they’ll fit in with the others just nicely. 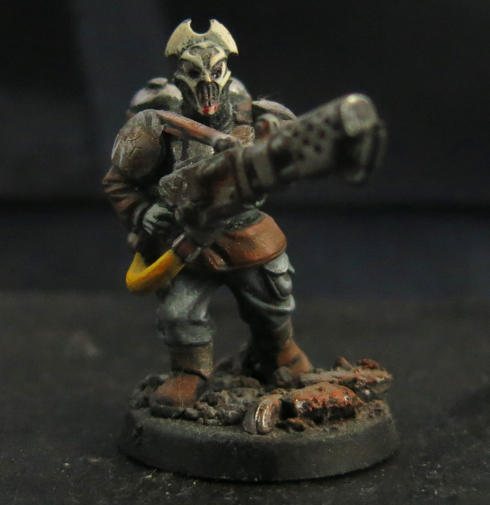 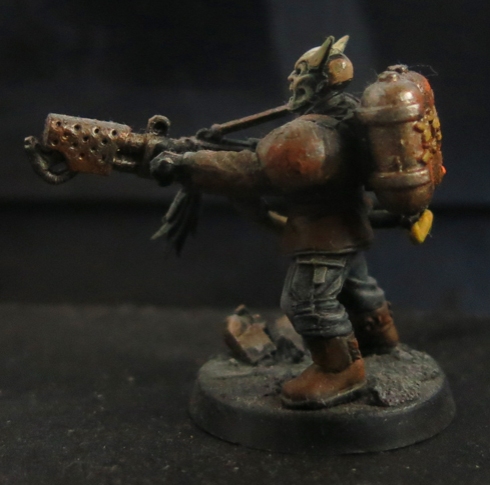 I also planned a squad of Wyrdvane Psykers, no longer shackled by the oppressive rule of the Imperium and allowed to disport themselves with the fickle power of the Warp as nature intended. So far I’ve only got this one built but I’m rather pleased with him, so there should be more soon. 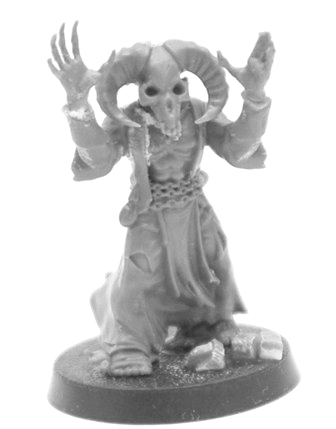 So, what do you think? Should I have reported my mutant powers to my superior officer and accepted whatever castigation was my due, or was I right to murder my commissar and carve an eight-pointed star on my flak armour? As ever, rally to my cause or demand retribution in the comment box below.

9 responses to “Anarchy Shall Be This Age’s King”